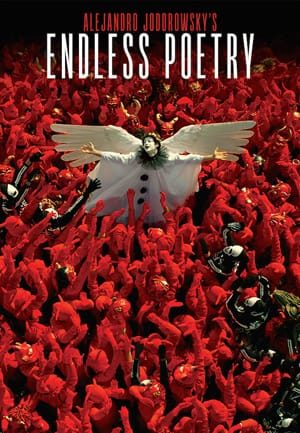 Alejandro Jodorowsky has been making films since the late 1950s.

His midnight arthouse film El Topo became a cult hit in the 1970s, and he has since written and directed a bunch of films that are both beautiful and intelligent.

Some may look at his films and ask “what the hell is going on?”

Others may look at his films and just let the experience take them away.

Jodorowsky has always been someone who beats to his own drum whether it’s on film or if he’s writing comics (such as The Incal or the genius Metabarons). Then he goes ahead and directs this film, Endless Poetry. And so it is at age 88, Jodorowsky has done something unexpected. He has directed a masterpiece.

Endless Poetry is a film about Jodorowsky’s early days as a young poet. It’s about as autobiographical as he’s ever committed to in any form. It’s a film about young adulthood set in Santiago de Chile.

The film stars his son, Adan Jodorowsky. Adan basically plays a young version of Alejandro. He is magnetic. His performance drives this entire film. Whether he is talking to his father (Jodorowsky’s other son Brontis, magnetic as well) or being seduced by a dwarf woman (Julia Avenado), Adan is wonderful. He gamely jumps into every scene and we want to follow him.

He is eventually drawn to the Cafe Iris, where he is drawn to the attractions the Iris has. The adventures then get crazier and crazier. It’s a Jodorowsky film after all. But for once, it’s accessible in a way that none of his previous films have ever been. It’s also his most sincere and heartfelt.

This is supposedly the second part of a five part planned movie event. The first was a film called The Dance of Reality. I liked that film, but it’s impenetrable. This one isn’t. Everyone is welcome into his house this time.

The last few minutes are some of the most beautiful I’ve seen from any filmmaker this year.

Some will compare this film to some of Fellini’s great works. They should. The film really functions at that high a level. It’s an incredible movie experience for anyone wanting to be transported. This was completely exhilarating.