Another week begins, which means my weekend of binge reading is over.  This time check out some exceptional titles including at least a few that you haven’t heard of (yet).

See you back here on Wednesday at the Graphic Breakdown! 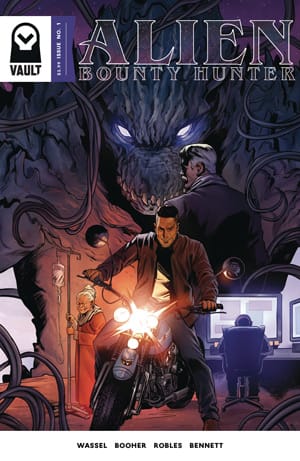 I didn’t know what to expect when I picked up this title. It’s “produced” by Mark Wahlberg and Stephen Levinson and created by Levinson, who brought us the television shows Entourage and Ballers as well as several high profile movies. This time they turn their attention to comic books.

But is this any good?

This turns out to be a classy comic book all around. The writing is creative and exciting. The characters are well developed.

The story follows Ben Madsen who is a bounty hunter from Arcadia. People love him. Ben has a decent life taking care of his aunt. He is offered a job that is too good to refuse. That job leads him down a dark path hunting aliens and getting into crazy trouble.

The story does a great job of world building right from the beginning. It’s fast, funny, and human. The art could stand to be a little better but it isn’t terrible. The storytelling is decent but I wish it was a bit more dynamic. Overall, it’s not a bad debut for a new property. I’ll be reading this for sure. 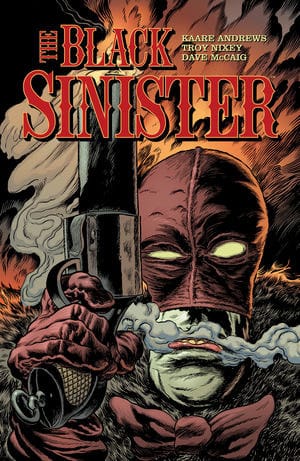 Man, I love Troy Nixey. I think he is a talented filmmaker for sure. However, I’ve always loved his comic book work. His art is awesome and I love the way he tells a story. Luckily, he is back writing and drawing comics. This book collects his story from Dark Horse Presents in one lovely edition and it is a must have.

Emerson Black is our superhero here. He is The Black Sinister. He is a superhero who is a little unhinged. Nixey does a great job

from the get go showing us his mental state. Each panel feels psychological and emotional. You can tell the character’s mental state just from the drawing alone.

The Mayor of Coal City decides to get rid of the city’s hero.

This leads to a hell of a fight and a conclusion that is just nuts. I loved it. Kaare Andrews helps out in writing this tale with Nixey, and they share similar sensibilities. Pick this up. It’s a gem that you may miss. You don’t want to…it’s something you’ll re-read again and again. I certainly will. 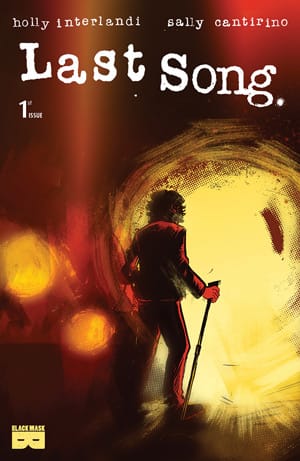 I totally loved reading this comic. The writing is wonderful and the art is perfect. Black Mask has done it again with this title. They have made yet another comic book with high quality writing and art that is unique in the marketplace.

Nicky Marshall is our main character here. He thinks he was saved from his turbulent past with Rock and Roll. After a traumatic event, he forms his own band called Ecstasy and they go to Los Angeles. But are they ready? This first issue focuses on the beginnings of the band, their growing pains, and their nativity.

The writing again is great. The art by Cantirino is something else however. It’s clean, beautiful, and it captures the story perfectly. Pick this up. A great first issue. Kudos to Black Mask for producing this fine new title. 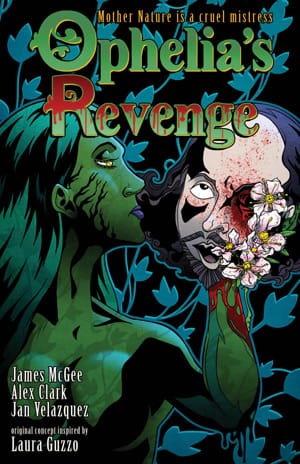 I read this issue and the story was very decent. I have to be honest, the cartoony art wasn’t my favorite at first but it did grow on me. The gore and and the dark humor behind the writing made it work and work well.

This is another one of those Kickstarter funded projects that we all know and love.

It is the story of Jean, who is angry at one of her fellow actors after A summer fling between them goes bad. They are performing at a festival and she now feels scorn. She goes off to get some payback. In doing so, Jean unleashes the spirit of Shakespeare’s Ophelia, who is a vengeful spirit who goes and wrecks mayhem on the fair.

The concept is fantastically nuts.

I give credit to the creators for really just going for it. I have to say pick this up. I went in thinking I wouldn’t enjoy it, but they won me over. It’s a good book overall. 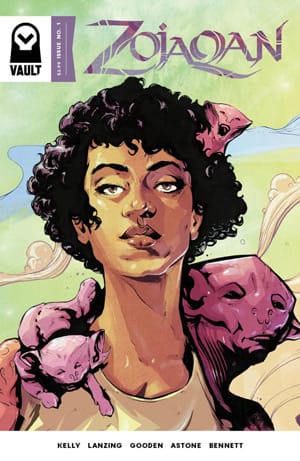 This is another nice surprise from Vault Comics. It’s well written and extremely well illustrated. You can’t ask for more than that.

This is a great beginning to this comic book series. It is reminiscent to the Promethea series from America’s Best Comics years back.

Shannon Kind is coming back from a war. As she returns to her village, she discovers that it’s become strange. What is going on?

Well, whatever it is, these acts are being done in her name. So she has to make a decision.

That decision may haunt her forever.

The characterization of Shannon Lind is pitch perfect for a first issue. The art by Gooden is damn magical. He’s got the chops and you’ll be hearing a lot from this guy coming up. He’s like a new J.H. Williams, but has his own style to boot. Pick this up. It’s pretty damn good. 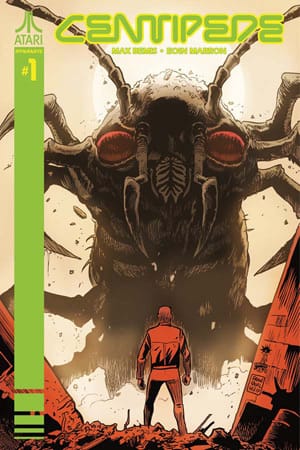 Dear lord. They have finally done it. We have come down to a Centipede comic book based on the old Atari game.

But wait! It’s written by Max Bemis who has been making a name for himself in comics with the very good Fookiller series amongst others.

Can this be a worthwhile read?

It turns out to be. Bemis makes it a grand horror film of a comic. A creature from beyond the stars begins an attack. It destroys the world. The only survivor, Dale, wants revenge.

Bemis keeps the energy high and the tongue planted firmly in his cheek. It works in a strange way. I very much enjoyed the writing. The art isn’t bad either and serves the story very well. Pick it up. It’s a bunch of fun. 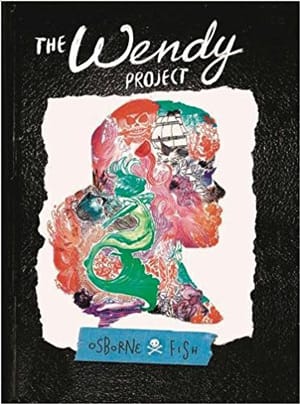 This book is one of the best books to be hitting the shelves in the coming weeks. The story is phenomenal and the artwork is superb. This is a book that deserves to be read and re-read. It’s a masterpiece from start to finish.

This book is a take on the classic Peter Pan story.

A 16 year old Wendy Davies crashes her car into a lake one evening. She had two brothers in the back seat and when she wakes up in the hospital, she is told one of them has died. Wendy, however, is convinced that a flying boy has her brother hostage.

Wendy is then sent to a new school where the people there look like characters from Neverland.

She is given a sketchbook by her therapist and starts to draw. Her drawings get her into a heap load more of trouble.

The writing is sharp and bold. The artwork by Fish is astonishing. This is a book that needs to be on your shelves. Buy this immediately. And don’t look back.