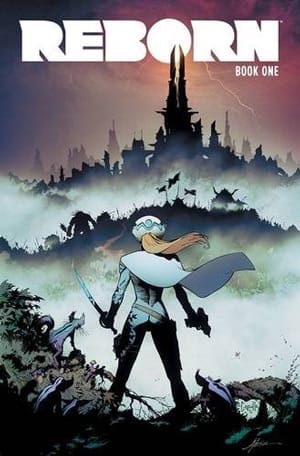 There is lots to love in Reborn, Mark Millar’s highly anticipated team up with Batman artist Greg Capullo. These master storytellers comment on aging, the afterlife, superheroes and large scale fantasy in a way that only Millar can.

Millar’s strength always at the base is taking a genre and re-presenting it to the comic book masses. From Kick-Ass‘ Spider-Man fantasy to Kingsmen‘s James Bond/Nick Fury spy stories, the genre gets inverted in Millar’s world.

Reborn, is more Excalibur meets Dungeons & Dragons and Conan The Barbarian meets Willow, than it is a story of what might happen when you die. In the battle between Adystria vs. The Dark Lands we’re immersed in a colorful fantasy world with a hero’s journey.

Greg Capullo, recently completing an epic run with Scott Snyder on Batman, returns to the independent side of comic book publishing at Image that started his career years ago as the artist for McFarlane’s Spawn. Drawing on his experience of creating levels of the dark underworld and levels of hell in Spawn, Millar taps into that mystical artistry that the artist doesn’t get to explore in his work on the Dark Knight. Capullo is also an undeniable master of current comic storytelling. He’s allowed to draw creatures, talking Man-Cats, battle armor and beautiful ladies in Reborn. It would be hard to imagine another artist take this one. (Though, stylistically, this book reads more like Saga than it does Savage Sword of Conan!)

This tells the story of Bonnie Black at the end of her life and what happens to her after she dies.

Bonnie is reborn at the prime of her life, searching for the husband she lost to an assassin’s bullet long ago.

When she arrives in the afterlife, she is joined by friends, her pet dog Roy-Boy and her father. This isn’t a realm of ghosts and spirits, it is a realm of real people fighting the evil undead in the Dark Lands. An old friend of hers is a giant shapeshifter. Her husband is out there and the forces of evil are attacking her loved ones.

When she arrives, she is greeted as the savior of Adystria. Her father and others have been waiting her arrival in the afterlife. She has special powers, but like a Jedi, these skills are innate but need some development. The first few issues have her head out on a hero’s journey with her dad and her cat

Back to the story we have Bonnie getting the sword as the hero. In a typically male role (we never see Princess Leia get Jedi training) of the classic hero’s journey is the real twist and hook. Bonnie has the entire experience of her long life on Earth, to carry over into this new world. Her body is what has changed back to her prime in her twenties. Who among us over thitry doesn’t wish to revisit those days with what we know now?

Bonnie’s father explains that how a person has lived their life back on Earth determines powers and abilities in their afterlife. She is their savior because she always did the right thing. In a heartbreaking moment after she reunites with her husband and his new family, she embraces her husband’s kids and promises things will be O.K.

Her selflessness is god-like with forgiveness and also the fearless love she has for her family and extended family makes her an admirable hero and I want more! As with most of Millar’s books, this volume ends but is left open for more adventures possible. That must have something to do with wanting to develop for television or movies!

Just as Bonnie is joyfully reunited with her loyal and friendly dog, a past cat of hers, now known as General Frost is a big man in the Dark Lands. He seeks revenge on Bonnie with his ice powers because he holds a grudge about her removing his testicles. Those that know cats might not be surprised that a cat would exact revenge in the afterlife, and we get to see how Bonnie deals with this Kold Kittie!

The story wraps up in an epic battle with an enemy to be revealed, a majestic griffin, and hordes of the Dark Lands versus Bonnie and her friends. No spoilers here, except that this is one of the most exciting and action packed series of panels and pages that I can only compare to the epic finale to Frank Miller’s Ronin.

I mentioned Star Wars as a point of reference because I believe there to be deliberate parallels to Luke’s journey, but truly for fans of fantasy, sci-fi and even real life crime stories there is a lot to unpack here in Reborn. Best read as a trade because it is hard to put down! As someone who has dealt with loss, this is a great story of the afterlife because of all of the adventures that could be possible for those that are no longer in this realm.

Hopefully those we have lost are holding aloft a great sword and facing off against jerky cats in the afterlife. That provides a small comfort to keep death in that perspective!