Injustice 2 continues to dominate in quality, but that is not to say the other books are any weaker.

The weakest stories came from Green Lanterns and Cyborg, but it is personal taste and slow storyline fatigue.

In case you haven’t picked then up Green Arrow and Savage Things both more that deserve a shot at your pull list.

This is my look into the DC Universe this week! 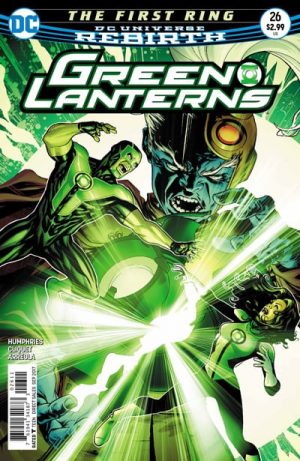 Volthoom may be causing havoc in the here and now, fighting the newly graduated Simon Baz & Jessica Cruz but his beginnings were far back in time.

A time when before the Green Lanterns, the spectrum of colours forged a single ring, one that was pure and embodied all emotion. Volthoom wasn’t always a villain, he was corrupted by his experiences and it took all the power of the Guardians to defeat him.

Volthoom may well have been the beginnings of the Lanterns but this is his story and his beginnings could lead to the end of Simon & Jessica.

You know how people always say the Star Wars Prequels were unnecessary? That Prometheus and Covenant weakened the Alien franchise?

Well this is not the exception, The First Ring is interesting, entertaining, but ultimately it is a watered down origin story that does nothing to strengthen the mythos of the Green Lanterns. I understand Humphries wants to make Simon & Jessica have a closer bond to the Corps but I don’t feel Volthoom is the character to do it.

Still this issue was all flashback, so perhaps its just a minor bump in the road. 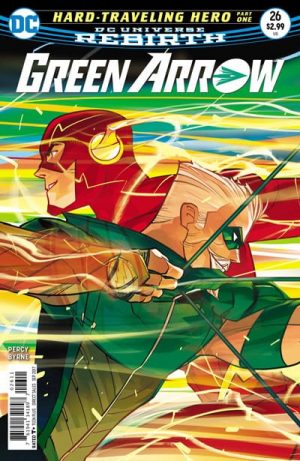 Ollie is a wanted man, he’s skipped bail and knowing the Ninth Circle is still out there has given him new purpose.

While chasing up leads his path crosses with some animals sporting super speed and the appearance of an old ally.

The Speed Force is leaking into our world and the evil organisation Black Hole is responsible. The Flash is more than suited for the task if it wasn’t for their partners… The Ninth Circle!

A Speed Force bomb has been created and unless Barry & Ollie cast aside their differences America will fall.

Remember the horror that was ‘Grounded’? Superman’s road trip across America? No? Good for you.

This story is happily nothing like that and the new direction for Ollie feels fresh and interesting. Despite the popularity of the television shows I had no desire to see Arrow & The Flash meet for a team up, then when it actually happens the fact it’s taken this long doesn’t bother you as it is brilliantly written and doesn’t feel like a cash in, or disjointed from the narrative of Ollie’s quest to defeat the Ninth Circle. 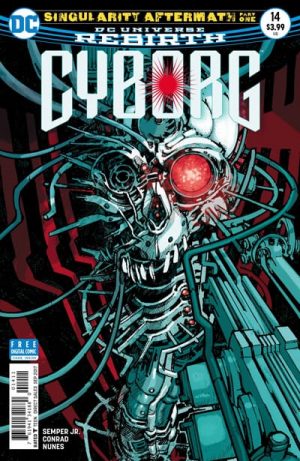 Things have gotten out of control and Anomaly isn’t even in charge anymore. Going through the Boom Tube has resulted in a trip to a potential future, a dystopia where the OTAC virus has taken over the world and only Exxy, Variant and Cyborg are alive to stop it.

Vic is stunned to find Beast Boy as part of the resistance and a long lost relative may be their only hope against the mecha-humans.

The story continues… what more can I say? This book feels just like a soap opera. I love the concept, I’ve found for the most past some brilliant stories that have formed an overall arc but it just seems neverending.

A cliche for a comic book is the never ending battle, but Vic never seems to have a moment to allow for variety or actual superheroics. I feel like a broken record here but this story really does need to end so Vic can continue in a new direction. Even traveling to a potential future offers nothing different.

The potential is there and I hope Semper Jr. will get the opportunity to move Cyborg forward. 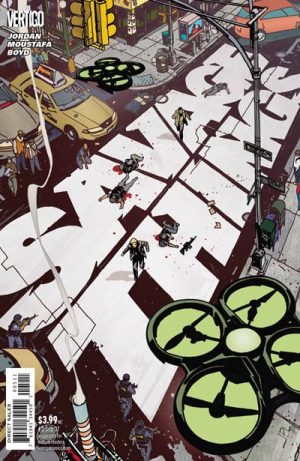 The city has succumbed to chaos.

While Kira and Abel try to fight their way to Cain not only are the villain’s henchmen out to kill them but so are the emergency services along with citizens gripped with fear.

Was this Cain’s plan all along and what does Black Forest really want?

As the truth is revealed Abel may be out of his depth on a mission that is doomed to fail if he and Kira cannot be stop his ‘brother’.

A riot is a notoriously difficult thing to write.

I cannot even begin to guess how it would be illustrated but interspersed with the flashbacks, it helps what would be quite full on time to decompress into a fully fleshed out story that doesn’t lose the storyline thread along the way.

Jordan & Moustafa deserve recognition come awards time for a complex and brilliant story to be immersed in. 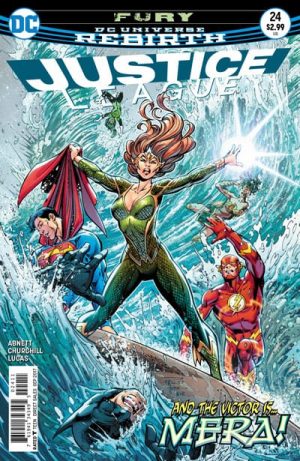 The League are alerted to a superstorm focusing on the heart of Atlantis, but when they race to help they find an angry Mera, who reveals that Arthur has been overthrown.

Mera , now a Queen without a kingdom, unleashes unimaginable power against all who oppose her and even those trying to help.

The League arrives to calm her fury and in a surprising turn of events give her a place in the Watchtower and a new beginning.

The issue is one very long convoluted fight sequence.

It is, we are told, linked to goings on in Aquaman but it a pretty flimsy story.

It gives Ian Churchill an amazing opportunity to showcase some superb art skill but aside from some spectacular layouts the issue offers nothing new until the climax. Abnett is no fool, there is a reason the issue is sparse on story and big on spectacle… the climax is the curve ball and pay off that nobody was expecting.

I won’t spoil the ending of course, but suffice to say, if it sticks it offers some opportunity for some fantastic new stories. 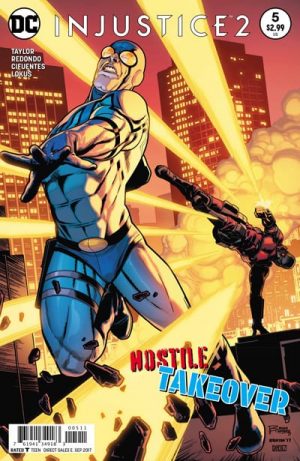 Ra’s versus Bruce as the two forge their armies for the coming inevitable conflict.

Meanwhile, Jaime Reyes struggles to control the power of the scarab to be the hero his mentor once was.

With fate in the balance, Ted can’t shake the feeling that something terrible is about to happen and when his old friend Booster reappears, he realises this may be the end for him.

When Ra’s attacks Kord and several other big company headquarters across the globe, Ted makes a last stand.

What does this mean for the balance of power, and now that Booster has made one last appearance, and which way will the balance shift?

Tom Taylor gives us a dual tale, both with impact, one in the long term and one in the short term but neither weaker than the other.

In point of fact, the story of Ra’s and Bruce amassing their forces for a battle royale is secondary to the story of Booster Gold and Blue Beetle knew was coming one day.

The powerful and emotional tale of this final mission is one that with be on my mind for a long time to come… For many this is just a tie in comic, but for those that have read it so far, they will tell you it is one powerful book that is strong enough by itself. 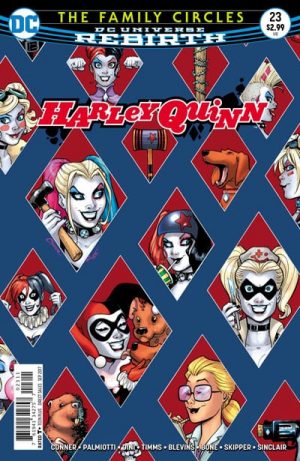 While Harley Quinn takes Goat Boy on a date to meet her parents, Red Tool goes to meet Poison Ivy to discover the machinations of her evil plotting.

The dinner with the folks is already uncomfortable but when you add a surprise attack by Clock King and Sportsmaster and it suddenly becomes a party…for Harley and her violent side.

Over in “Harley Loves Joker”, while the remodeling of the new base moves along a bored Joker starts to plot a new vendetta against his deadliest foe.

As uncomfortable dates go, this is right up there. This book has the most off the wall characters as cast members and bizarre series of circumstance.

Part of the books charm is its less than conventional storytelling, its warped sense of humour and comical yet deadly violent streak.

This issue doesn’t buck the trend at all and puts a spin on meet the parents that will make you cringe (in humour) and while the dinner from hell continues, Red Tool goes after Harley’s former best friend who has a plot of her own that only Red can find the answers to. 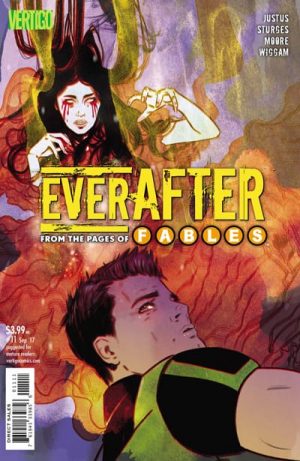 Kara Bass reveals more than the the team were ready for with devastation in her wake.

Peter meanwhile is on a quest but he is putting his life on the line for the hunt.

Meanwhile after the siege on the school, the Shadow Hunters barely have time to draw breath before they are faced with even deadlier threats. Can they survive?

After the siege, the gears shift in the story as we explore other characters in the Shadow Hunters roster and allies…

Peter seeking out artifacts is an interesting new direction but by far it is the Shadow Hunters themselves and their new quest that really pushes the books progression.

Unlike the siege, this story doesn’t yet feel like is a strong direction to move forward in but it is the first story following a very strong introduction and Kara Bass’ is a worthy successor in the supernatural series.