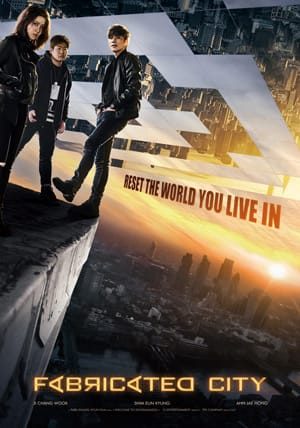 When I have the opportunity to see a movie like Fabricated City, a South Korean tale of gamers helping one of their own who’s been framed for a rape and murder, I can’t help guessing if the film will have elements of cyber adventure like Neal Stephenson’s Reamde, or Ernest Cline’s Ready Player One. The movie teases this kind of action but quickly devolves into a somewhat standard action-adventure, cat and mouse story with a side of extra hacking and technology.

Director Kwang-Hyun Park, a renowned director of commercials whose previous film Welcome to Dongmakgol was the 2005 entry from South Korea to the Academy Awards, does bring some good story elements to this film and keeps the action coming through the last half of the film.

The story concerns Kwon Yoo, played by Kwang-Hyun Park, a successful television actor who has been in several highly-rated shows, as an unemployed former Tae Kwon Do champion and gaming addict. In his online persona of the Captain, he leads a merry band of gamers through tough combat situations hindered only by the weak link in the group, Mr. Hairy or Yeo-wool outside of the game, played by Eun-kyung Shim, a former child star that has made the difficult transition to adult roles.

After a moderately cheesy opening battle that ends up being part of video game, we get the start of the real story as Kwon finds a lost phone at his cyber cafe and returns it for a reward. He later wakes up to police accusing him of raping and murdering the owner of the phone. His trial and time in prison for this crime are the slowest and most boring parts of the movie. It’s not like they should be cut out entirely but they seemed to go on forever.

A traumatic event on the outside causes him to gain a purpose in life and using his previously mentioned but not seen combat skills, he breaks out of prison and goes on a quest to clear his name.

Once Kwon is out of prison the story moved along at a pretty good pace. The action was barely believable but fast paced with lots of stunt driving and an improbable engine replacement. The ability of the technology far outpaces what is currently available. The number of monitors built into things (tables, walls, whole floors) and the kind of access to CCTV footage and personal records of individuals was cinematic and played well into the tropes of hackers and the government can get to everything and manipulate it and you at will. But much of it was very unrealistic. I was reminded of the 1995 movie Hackers and how it’s brand of ‘cool’ computer graphics was derided as cheap and cheesy. These were more smoothly executed but within the confines of a story happening in the present they were out of place. If more effort had been made to set the story a bit into the future, like Minority Report or the forthcoming Ready Player One, then this kind of computer graphic technology wouldn’t seem out of place.

The movie followed a series of reverses where the good guys and the bad guys would get one over on each other. It kind of reminded me of a much less gruesome version of the back and forth between the Secret Agent and Serial Killer in I Saw the Devil.

Overall there very little character background around the principles. We learn nothing about Kwon Yoo outside of the fact that he is good with video games and tae kwon do and loves his mom. It is hinted that he was kicked off the Tae Kwon Do team but nothing is ever said about why this happened or how it affects his character. His main video game helpers also just show up and can abandon their previous lives to help the Captain fight the set up. Yeo-wool, Mr Hairy, has an extensive and expensive computer set-up with no explanation of how or why or anything. The helping gamers miraculously have all the resources they need with only a line or two of background that sets them up as at least two dimensional characters. They perform in real life as well or better than their gaming personas in tough physical situations.

But in the end, outside of dragging before the prison break, this wasn’t a bad film. While it did well in South Korea, I don’t see it doing very well in the US outside of a niche audience that likes Asian action cinema already.