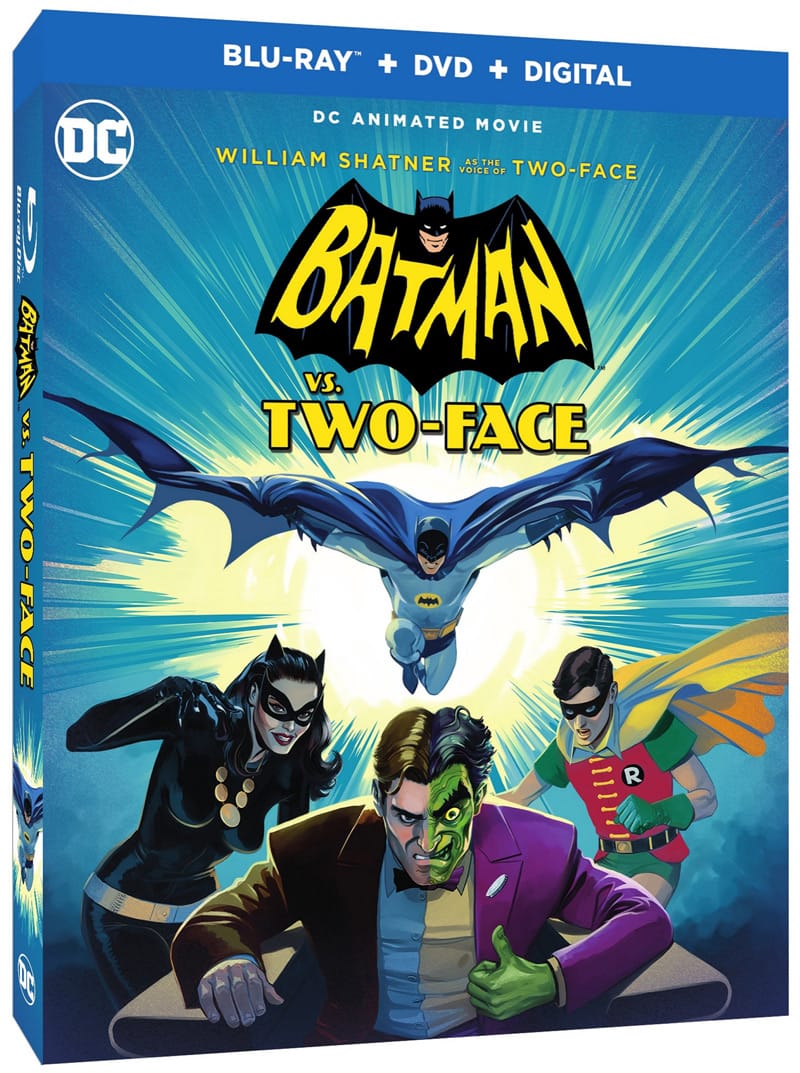 As the sequel to the 2016 hit animated film Batman: Return of the Caped Crusaders, the all-new Batman vs. Two-Face finds Batman and Robin back in classic 1960s action, protecting Gotham City from some of the most nefarious villains in comics history. But when the mutilated master of multiplicity, Two-Face, begins staging a daring crime wave across Gotham, the Caped Crusaders must work double-time to discover his mysterious secret identity before they can halt his evil-doing – all the while combating the likes of Catwoman, Joker, Riddler, Penguin, Bookworm, Hugo Strange and King Tut!

The late Adam West leads the star-studded cast in his final performance as Batman. The beloved actor delivers an inspired turn opposite fellow pop culture icon William Shatner (Star Trek) as the criminally conflicted Harvey Dent/Two-Face. This is only the second production of any kind to feature the two titans of the fanboy realm together. West and Shatner first teamed in the 1963 “Alexander The Great” television series that never made it past the pilot.

The cast also boasts two more pop culture icons of the 1960s. Burt Ward is back for more “holy” fun as the Boy Wonder himself, Robin, and Tony Award winner Julie Newmar reprises her role as the fiendish feline, Catwoman.

“Batman vs. Two-Face is a must-have for all Batman fans featuring a cavalcade of his foes, and an amazing cast including two giants of pop culture, Adam West and William Shatner,” said Mary Ellen Thomas, Warner Bros. Home Entertainment Vice President, Family & Animation Marketing. “Warner Bros. Home Entertainment is excited to bring these beloved characters to animated life, and proud to have been associated with an actor as impressive, gracious and entertaining as Adam West. We salute his extensive contributions to the legacy of the character, and we are greatly appreciative of his cooperation and support in bringing this animated film to fruition. He will be greatly missed.”

Special Features for Batman vs. Two-Face include: