So I’m watching Game of Thrones season seven’s penultimate episode,“Beyond the Wall,” and I should be freaking amped. It’s Jon Snow, Sandor “The Hound” Clegane, Jorah Mormont, Tormund Giantsbane and dudes beyond the Wall, fighting an army of ice zombies.

Look! It’s Beric Dondarrion with a flaming sword like Azrael, hacking away at ice zombies! He already killed an undead bear in the same gotdang episode. And that flaming sword is real, actual fire! 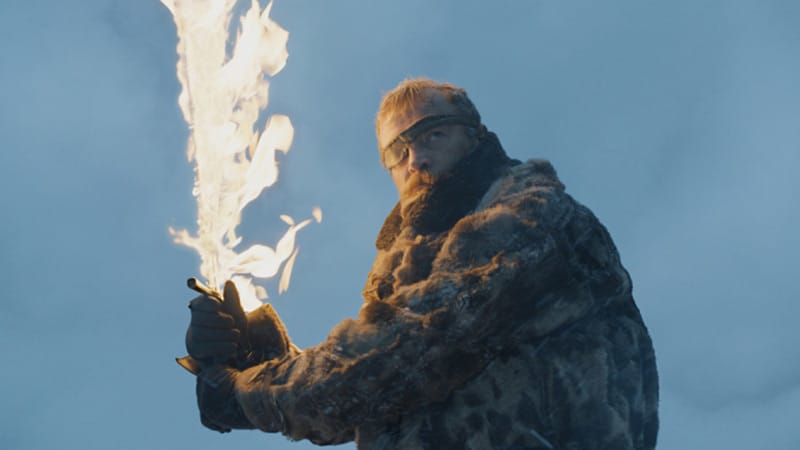 The standoff of the men on a rock surrounded by wights was tense, thrilling, and well shot. (It should be; series veteran Alan Taylor, who also made Thor: The Dark World, directed it.) This felt like some of the best bits of The Walking Dead.

Because I knew somebody was going to save all the dudes who counted, even as Tormund was almost dragged under the ice. Bam, there was The Hound. And just as Jon was set to keep on fighting in the teeth of certain doom – again – out came Daenerys riding Drogon, the dragon so badass that they just changed one letter to name him. 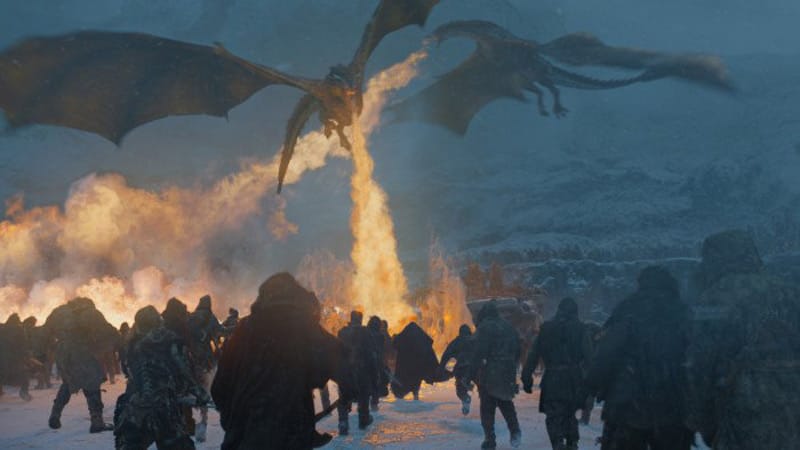 Just like, on The Walking Dead, Rick and Darryl would run off into a mess of walkers and somehow not die. Because they’re too cool and popular to die. The fake-outs don’t fake me out anymore.

That bothers me, because unlike The Walking Dead, we know Game of Thrones is ending soon. Showrunners David Benioff and D.B. Weiss already have outpaced George R.R. Martin’s books, so they are not adapting anything anymore.

Counting season seven’s finale, we have only seven episodes left. The world has been contracting rapidly, characters once far flung are side by side, winter is here, the dragons are powerful, and the dead have risen.

As a result, Game of Thrones the show of slow-burning, novelistic storytelling and political intrigue we came to know and love has changed into a turbo-paced, full-on fantasy epic. It’s becoming clear that Benioff and Weiss are slapping the paint on and blowing up the big stuff to make sure we don’t notice the shoddy details.

You’re telling me neither Jon, Beric, nor any of those other snow cowboys could bother to shout “Aim for the Night King, over there!” to Daenerys? 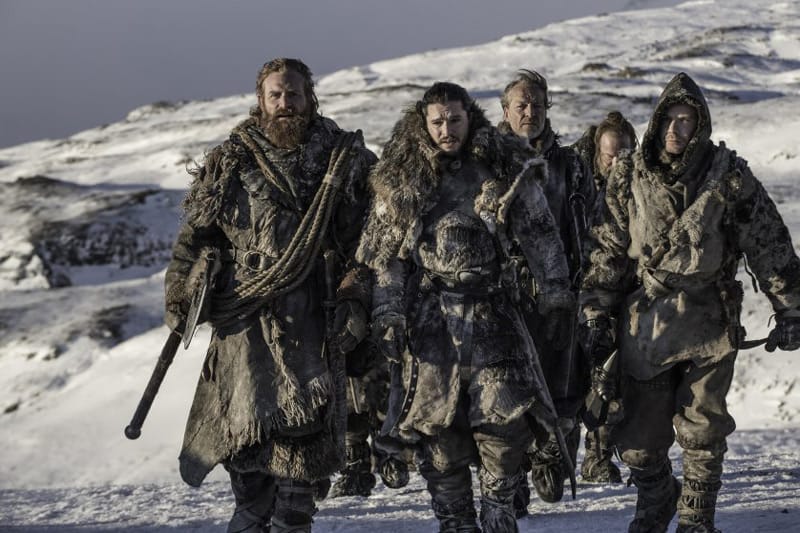 You’re telling me none of those MFers wouldn’t have just pulled Jon onto the dragon so they could get the fuck out of there? He’s the dude in your friend circle who wants to stay too long at the club and gets in trouble.

You’re telling me that I’m supposed to buy an episode of a TV with, like, a baker’s dozen last-second rescues in one episode?

I don’t even know the distances between places! But you’re telling me that Daenerys and the dragons traveled from Dragonstone to north of The Wall that quickly? They must travel, like, 100 miles an hour. And how many miles did Gendry run to return to the gate at Eastwatch and a raven flew to Dragonstone that fast? How long were Jon and the boys on that rock?

The timing in “Beyond the Wall” was so bad that Taylor, the episode’s director, publicly acknowledged the timeline was “a little hazy” but defended it as “plausible impossibilities” and “I hope the story’s momentum carries over some of that stuff.” Sure thing, chief. 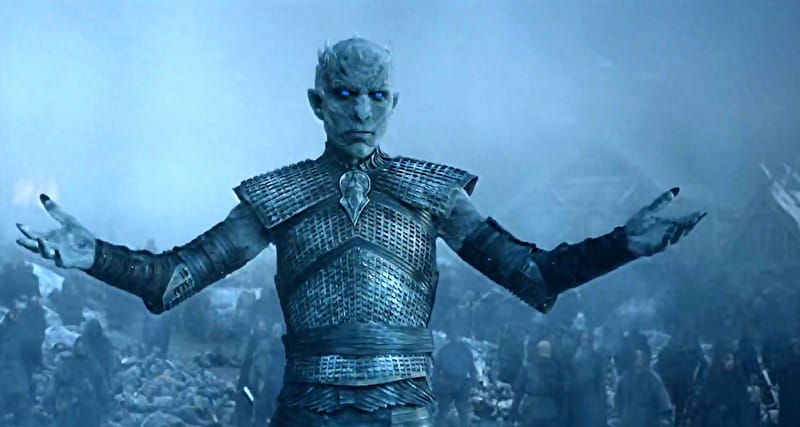 Add to this that we have had not one bit to understand the White Walkers, the Night King, and why they’re doing what they’re doing. I don’t think it’s enough that they are death, therefore they are evil, and that death seeks to claim the world.

On this show, where each character has a motivation, I want to know who the Night King is and why he’s doing any of this. If it’s a dead king who is regretful in death and so envious of the living that he would rather make them all dead, that’s good. Just give me something!

I mean, other than that the Night King is hella good at javelin. The U.S. Olympic Team literally asked about him on Twitter.

The show’s gonna reveal that Bran is actually the Night King, isn’t it? I’m gonna be so mad. 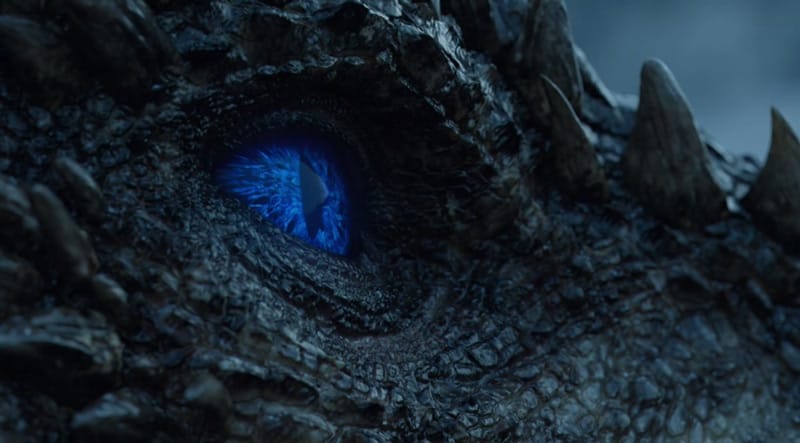 As stomach-droppingly sad as it was to see Viserion killed and turned into a wight, I still kept thinking: “Where did the wights get thousands of yards of giant chains from to pull the dragon out of that lake?”

The Arya-Sansa feud really bothers me this season, and it really went beyond the pale in “Beyond the Wall.” We’ve already known that Arya dove into killer psychopath by now, but the show gives in to a terribly hackneyed trope of when the psycho walks up to somebody with the business end of a lethal weapon pointed at someone, only to spin it around and hand it to that person.

Ugh! If Sansa had a medicine cabinet in the bathroom, I’d expect Arya to show up when it’s closed. 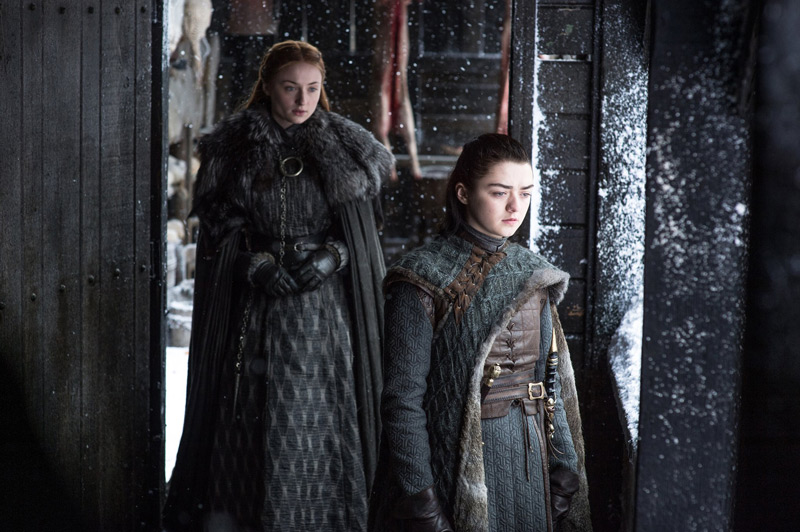 It’s not a problem that Arya and Sansa would be at odds, even now. Each of them have experiences and goals that could come at cross purposes very easily, and organically.

Arya’s blood-and-revenge path and killing machine training could leave her as a radicalized zealot who seeks to defend the Stark family and Winterfell at all costs. Sansa’s years as a captive of horrendous men could see her learning from Cersei’s success in holding power while fearing how men handle it and seeing how good she is at using power to manage Winterfell and its knights.

The problem is how contrived it all feels. Arya can’t stop jumping between admiring Sansa’s leadership skills and accusing her of being power-hungry. And despite seeing the Lannisters’ treachery kill off nearly everyone in the family, you’re telling me she can’t understand how Sansa would have been forced and/or tricked into writing that letter in service of a plot to get their father killed?

Instead, she’d still be hung up on Arya liking pretty dresses, in some fantasy-epic version of Taylor Swift’s lyrics to “You Belong With Me” with the But she wears short skirts, I wear T-shirts / She’s cheer captain and I’m on the bleachers bull-pucky?

Come on, my Westerosi! 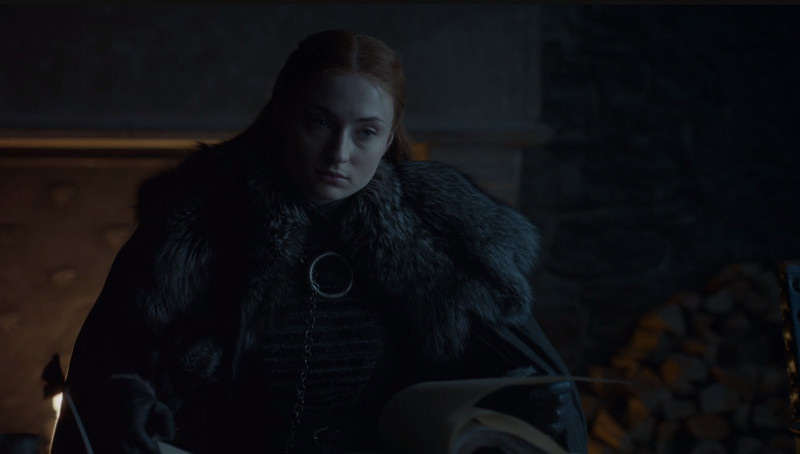 You’d think half of this wouldn’t even be happening if the show followed the logical steps of Arya and Sansa having just one actual conversation in which they tell each other what happened to them. All we needed was one honest, vulnerable conversation in which both Arya and Sansa discuss how the Westerosi patriarchy denied them from becoming what they wanted to be – Arya a brave knight, Sansa a capable noblewoman.

Because they were girls, they instead were put through hells of abuse, rape, torture, deprivation and heartbreak. They both had to fight, claw, and kill their way to their respective destinies by toppling repeated injustices. 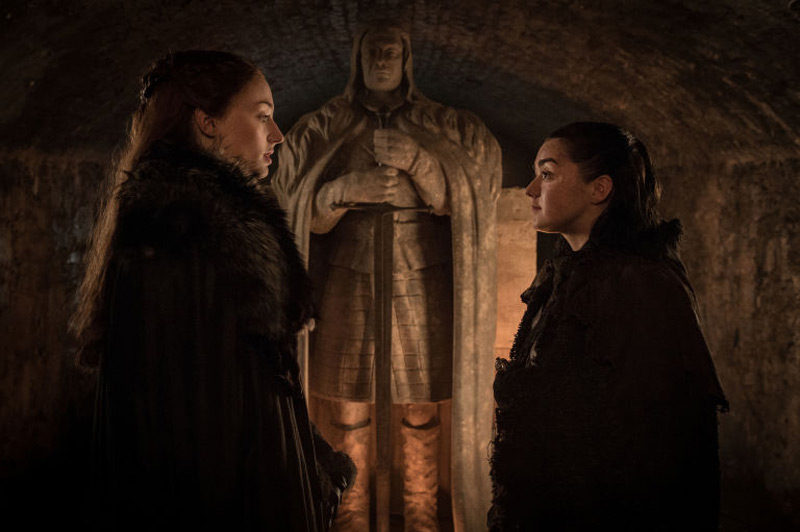 Arya and Sansa could discuss how their father, Ned, was an honorable man who surrounded them with honorable brothers – even a bastard half-brother – but failed to prepare any of their children for the evils of men. That they had to learn about them all in horrific ways, or lose their lives.

Because Arya and Sansa are reaching their destinies after learning such lessons, they could claim sisterhood above all and not fall for ploys from Littlefinger, whom they already know means them nothing but harm! Him and his smirky behind. 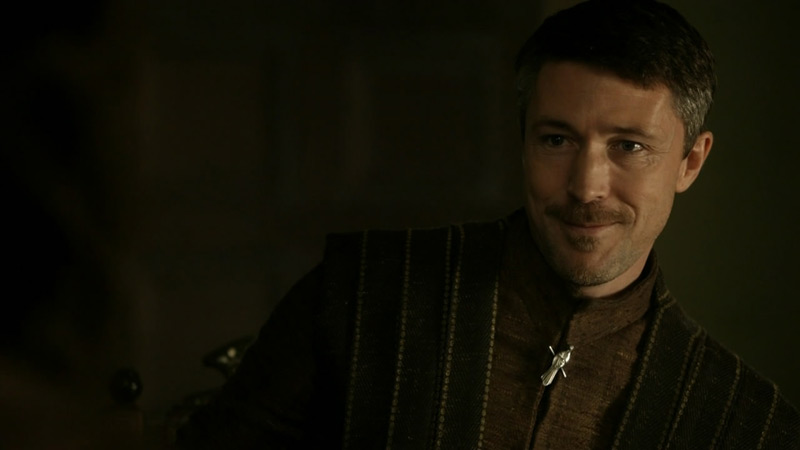 If Benioff and Weiss can’t get this bit right when flying solo without George R.R. Martin’s books to guide them …

If they write and film rape scenes without knowing it …

Then how in the world are they going to tackle the complex minefield of gender dynamics that Confederate would entail?

Maybe they’re not the geniuses everybody thought they were. Or at least HBO shouldn’t have so much faith in them that they run a press release on radioactive idea of “What if the South won the Civil War?” with no script or idea of how the show might work without becoming the 21st century’s Birth of a Nation.

I gave up on The Walking Dead after they spent season six teasing Negan and then cliffhanging on whom he was gonna kill. I don’t regret my choice, either. Got so much of my time back.

I’m not leaving Game of Thrones, even as it gets stupid. The awesome parts are still awesome, just seven episodes remain, and I’m ready to see how it all ends.