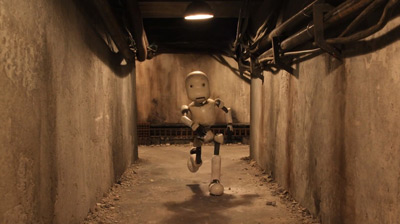 If the world asked what would happen if David Cronenberg did stop motion animation the answer would be Takahide Hori’s Junk Head.

This feature length follow-up to the award winning short film Junk Head 1 from 2013 continued the style of the short while expanding the story both forward from and prior to the action of the short.

The story followed an unnamed adventurer exploring the depths of a dystopian post apocalyptic underground civilization in the wake of a 1,200 year truce after a war with humans and clone worker slaves. Humanity has changed a lot with no need for a body for the head to survive. The clones have mutated into a variety of cute and horrific creatures with many variations on the human form reminiscent of the creations of the Umbrella Corporation from the Resident Evil game franchise.

The adventurer was beset from the beginning and his body changed throughout the film. After his initial drop into the subterranean world was interrupted by a missile, the pieces were reconstructed into a white robot shell. With amnesia he forgot his purpose and played a compliant fish out of water being attacked by many of the well constructed and somewhat gruesome mutated clones of the underworld. After a harrowing trauma restored his memory, panic drove him to nearly destroy himself again as he fell deeper into the abyss of the mutant clone domain. He was reconstructed again and again subject to amnesia and acquired the name Junkers.

Slowly through other adventures and some concussive memory restoration the reason for the trip below and information about life above were revealed. The characters all spoke a gibberish of fake languages with subtitles letting the audience in on what was said. This followed from the original short where the gibberish was subtitled in Japanese or English. There was no dubbed version for those that don’t want to read.

Something seemed familiar about the film when I first watched it: the first 30 minutes of the feature were the original short film Junk Head 1. The rest of the feature picked up immediately after the short’s last scene. The middle of the film dragged a bit with an episodic repetition of attack, run, get damaged. The third act broke the sequence and brought together elements from earlier in the film culminating in a touching climactic scene.

The original short took four years to complete, from 2009 to 2013, and was worked on only by Takehide Hori, working under the name Yamiken. The feature took four more and expanded the short from 30 minutes to 114. He also acquired a few extra helpers but it boggled my mind to know that a handful of people made this entire feature length stop motion animation film. In another nod to the D.I.Y. Nature of the film it was shot using a Canon Kiss X4 camera; sold as the T2i in the U.S. and was considered to be a low-end consumer DSLR.

The animation style was still pretty rough and reminiscent more of A Town Called Panic than the ultra-slick Laika stop-motion animation from something like Kubo and the Two Strings. The character models and sets were all very well done. The creatures were raw and sometimes profane. The violence was not held back with blood, guts and dismemberment used to good effect. This was not a film aimed at children.