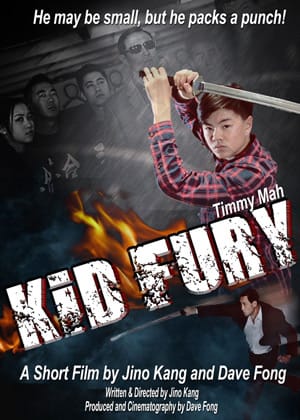 In the first installment of what we can only hope becomes a serial, Kid Fury starts off quickly and to the point with its setup, main characters and, above all, fast paced action.

A mysterious box comes into the possession of a well dressed and menacing gangster (Jino Kang, Weapon of Choice) and a young man (Timmy Mah) confronts him at his dojo to reclaim it.

Well choreographed action ensues for the remainder of the short, with henchmen of similar age to the boy coming at him left and right.

The bulk of the feature is filmed in black and white, which adds an artistic touch to the action.

Kang is brilliant here. Channeling “Beat” Takeshi and combining a few other classic yakuza movie elements to his character, Kang carries this feature more with his mannerisms and demeanor than with his martial arts choreography, which is incredible in its own right.

Mah’s athletic prowess is immediately apparent within minutes, carrying the choreography load with attrition and athleticism you might not even get from most of the typical acting veterans. Like a ’90s era Image comic book, there is far more action than story here, which is perfect for something of this short length. The camera work and action is not as dynamic or high impact as you’ll see in Weapon of Choice, but the actors here are very young and full of potential, hopefully featured in recurring roles and even perhaps built up as characters themselves.

There is enough mystery and even revelation thrown into this short that the audience should be very curious to see what happens in potential future installments. The very decision to go with a short story format is very fresh in comparison to what else is out there, and it is exciting to think of what might be next for Jino Kang and his Kid Fury.