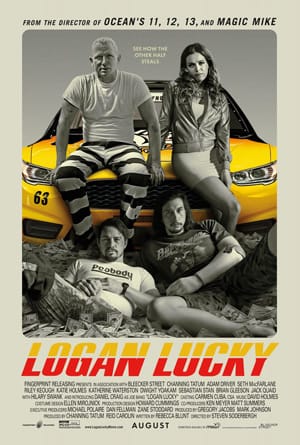 Steven Soderbergh’s latest heist film, featuring a pitch perfect cast without a weak link in the bunch, is sporadically amusing but never quite as funny as it thinks it is.

After being fired from his construction job at the Charlotte Motor Speedway for a bum knee liability, blue collar, barely-able-to-make-ends-meet Jimmy Logan (Channing Tatum) decides to put his inside knowledge of the underground money-funneling system to good use and rob the flagship venue of the NASCAR empire.

Enlisting the help of his one-handed brother Clyde (Adam Driver), their hairdresser sister Mellie (Riley Keough), and a trio of hillbilly brothers led by a bottle-blonde Daniel Craig as the incarcerated safecracker/explosives expert aptly named Joe Bang, Logan sets out to reverse his family’s legendary streak of bad luck.

What could possibly go wrong?

Logan Lucky is a largely by-the-numbers affair. And there’s absolutely nothing wrong with that. It’s pure comfort food elevated by a talented ensemble that’s game for just about anything. Unfortunately, the script struggles to match their enthusiasm which would have pushed the film into more memorable territory.

While Daniel Craig’s performance may be worth the price of admission alone, and Channing Tatum once again proves that if the leading man thing doesn’t work out he’s got a promising career as a character actor, it’s Farrah Mackenzie who steals every single scene she’s in as Logan’s precocious daughter, Sadie. Her mother Bobbie Jo (Katie Holmes), who remarried up, may want Sadie to be a beauty queen, but she’s daddy’s little girl through and through and the chemistry between Mackenzie and Tatum is a true highlight of the film. If only they had more scenes together.

There’s a pretty good chance you’ll have fun with this “Ocean’s 7-Eleven,” just temper your expectations, crack open a six pack of Bud in your double-wide, and enjoy the show.