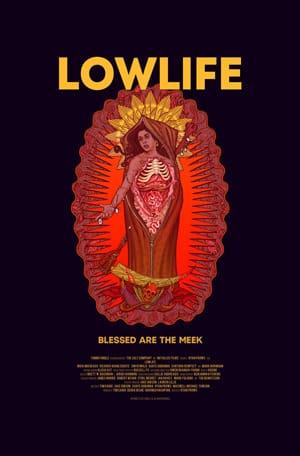 What do a fake ICE agent, an insane Luchadore, a junkie whore, a beaten down motel clerk, a former gangster now family man, a wigger with a swastika tattoo on his face and a scumbag fast food chicken joint owner have in common?

Lowlife will both regal audiences, and perhaps, anger them.

I honestly don’t want to say too much about the plot of the film other than the trailer really missells this movie.

While everything in that trailer is in the film, when you see those scenes in context you get a very different experience than what you may have expected. For one thing the movie is far more serious and far DARKER than the advertising indicates. Another thing that is also related to tone is that the movie itself is trying very hard to be a black comedy but at times just comes off as mean spirited rather than dark comedy. For every funny bit that lands perfectly there are two that miss their mark.

Without going into plot details too deep the film is intentionally fractured and told from a variety of perspectives. I very much get the feeling that director Ryan Prows is aping the style of Pulp Fiction that of SLC Punk and yet only partially succeeding.

The film jumps around the timeframe of the events to show us each characters’ perspective of things which means some events cross with one another while others merely set up future events. What does work is that this gives a very interesting look at the story when pieced together. We see things from one character which don’t make a lot of sense but then the film rewinds and starts showing us those events from another angle and it starts to form a complete image. This is the arguably the strongest weapon Lowlife has… the story is written in such a way to only really work in the (seemingly) scattered narrative it uses. I do not think the movie would work if told chronologically.

The cast all do a great job with Mark Burnham (90’s TV bad guy) and Nicki Micheaux (The Shield) as highlights giving polar opposite performances.

Micheaux as motel manager Crystal is quite and subdued only spurred into the chaos of the film due to external forces while Burnham as Teddy ‘Bear’ Haynes is an almost cartoonishly over the top sleazeball. Between these two poles you have Ricardo Adam Zarate as Luchadore El Monstruo, Jon Oswald as swastika toting Randy, Shaye Ogbonna as quiet black accountant Keith, Jose Rosete as corrupt ICE Agent Fowler and Santana Dempsey as preggers junkie Kaylee (the connecting tissue of the entire story). All of them give fantastic performances.

If you are a fan of the Boomerang Kids TV series, you may notice the bulk of that cast appears in this film. That is because Lowlife director Ryan Prows wrote and directed every episode of that show. As with Boomerang Kids, Prows uses a washed out visual style which I frankly found bland and boring in that show and in this movie. Why are so many filmmakers afraid of color? If this movie had utilized color more to set it apart it may have worked far better. The entire writing staff of Boomerang Kids, in fact, wrote this movie as well and you can tell this was not a single vision. That is a problem.

The story alternates between dark and funny to mean and “I think that was meant to be funny but it’s not”. At it’s heart Lowlife is a comedy that is presented as a batshit crime drama but in practice the disparate segments never quite gel as much as they frankly should. There are parts that work amazingly and then there are segments that feel like they are a part of a different film. This is somewhat fixed with the multiple viewpoints coming into play but that does not repair all of the story problems. Having a single vision of a single writer and director may have focused the final film more because five writers for a this story is not only unnecessary, but spoils the end product.

Obviously shot on a low budget around Los Angles, Lowfife is worth checking out despite it’s problems. It may look like a Tarantino or Paul Thomas Anderson clone at first glance, but while Lowlife does not completely do what it sets out to, it gets more right than wrong.