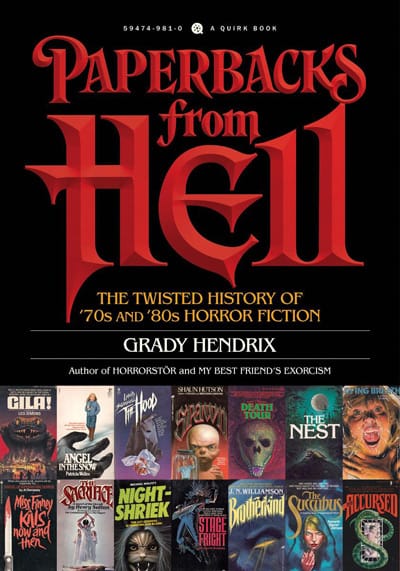 Paperbacks from Hell is an absolute delight. It chronicles the explosion of horror fiction following the appearance of Rosemary’s Baby on the bestseller list.

Some of these authors would exploit various social and political movements of the 60s and 70s.

Native Americans fought for social justice and horror writers were quick to use their cause for insane novels like Graham Masterton’s The Manitou in which a young woman gives birth (on her neck) to Misquamicus, a 300 year old medicine man out for revenge.

Revenge is also the motive for animals angry at how humans have abused the environment. It started with James Herbert’s The Rats and was followed by books like Robert Calder’s The Dogs, Edward Jarvis’ The Maggots, David Anne’s The Folly (genetically engineered rat-rabbits), and Mark Washburn and Robert Webb’s The Predators in which a Kodiak bear and a great white shark battle each other on cable tv.

One reason for the success of these paperbacks was that they were sold in supermarkets, convenience stores and airports. They were a cheap thrill (most were priced under $2.00). Robin Cook’s medical thriller Coma spent 13 weeks on the New York Times bestseller list. Tom Tryon’s The Other was on the list for 24 weeks and William Peter Blatty’s The Exorcist was on it for 55.

Another part of their success was the cover art which Hendrix explores in detail. So what happened to this glorious wave of horror? It’s the physics of waves. No matter how big a wave is, it eventually crashes on shore. Paperback publishers like Avon, Bantam, Ballantine, Pocket Books, and Tor pumped out a lot of product but when quality of the writing waned, the audience lost interest.

These small publishing houses were absorbed in to bigger ones like Random House, Macmillan, and HarperCollins and readers were less interested in horror and more interested in “thrillers” involving serial killers. Also, cheap paperbacks were being replaced with trade paperbacks that were more lucrative.

The real value of this book is the hope that these writers will not be forgotten and that adventurous readers will search the dollar bins at bookstores and conventions for these lost masterworks. Hendrix makes the case better than I could when he writes, “These stories are timeless in the way that truly matters: they will not bore you.”

Personally, I will be forever grateful to Grady Hendrix for introducing me to John Christopher’s The Little People in which an Irish castle is haunted by Gestapochauns (oh yes, NAZI LEPRECHAUNS!). Genius.

Chris Byrnes worked in theater for two decades and appeared in the Showtime series “Brotherhood”
and the Disney movie, “Underdog”. He now toils at Books on the Square bookstore in Providence.