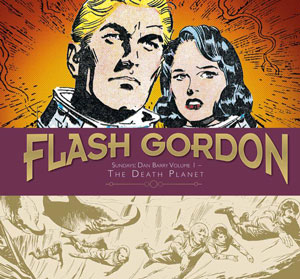 If you asked any veteran comic book artist who influenced them, odds are the answer would include Alex Raymond. Raymond was a master illustrator and is considered—along with Hal Foster—one of the most swiped artists of all time, as well as one of the most influential!

Perhaps that’s why no one ever seems to remember Dan Barry, let alone give him any credit on his own. Raymond wasn’t just a big act to follow. He was the biggest!

But now we find ourselves in what others have called the Golden Age of comic strip reprints and Dan is finally getting some credit! Raymond’s classic Flash Gordon run that began in 1934 has been reprinted endlessly. Because of those reprints, the old serials, and the late ‘70s movie, anyone familiar with the character at all would recognize the basic story of the handsome college athlete, the innocent bystander, and the crazy scientist who end up thwarting an invasion of Earth from the rogue planet Mongo. Space opera simply didn’t get any better! Even George Lucas famously acknowledged Flash as his main inspiration for Star Wars (which, itself, later inspired the big budget Flash Gordon film!).

In spite of appearances, though, the brilliant Raymond’s Flash was not the whole story. Not by a long shot! Two other legendary illustrative artists, first, Austin Briggs and, later, Mac Raboy, took over the long-running strip when Raymond went off to World War II.

Dan Barry was a young artist who already had a good, solid storytelling style when he came onboard on the daily Flash Gordon strip in 1951, a gig he would maintain—more or less—for the next four decades. In 1967, he even took over the Sundays. With that kind of longevity, it has always seemed bizarre that most of Barry’s work has remained out of print and unsung, if not entirely unknown, to the casual fan.

Britain’s Titan Books, a pioneer in comic strip reprints, has in recent years published a number of volumes of Flash Gordon from various different periods and now, with Flash Gordon Sundays: Dan Barry Volume 1—The Death Planet 1967-1971, the average fan gets to discover the joys of middle period Flash!

Is Dan Barry good? Hard to say, actually, because Barry became widely known for his use of assistants and ghost artists. This wasn’t a new thing, or even a bad thing, as the toll of turning out a new strip day after day after day, 7 days a week for years at a time has led just about every successful cartoonist (except Charles Schulz) to avail themselves of ghosts and assistants at one time or another. The important thing was the result! Was it a good strip? Or, in the case of the soap strips and adventure strips, was it a good, entertaining story?

And the answer here, is, “Oh, yeah!” The Flash we meet in this volume, more than 30 years after his debut, is a seasoned spaceman, an astronaut used to traveling around the various planets in high tech rockets and spaceships on various missions both diplomatic and military. His old friends Dale Arden and Dr. Hans Zarkov are still around but not in every story. Instead, our hero has many new friends and enemies including aliens, robots, monsters, a stereotypical Mexican comic relief sidekick, and even interstellar Soviets! Amidst a series of loosely interconnected stories about colonizing Pluto, we also deal with shape changing circus aliens, reality distortion, the storms of a dying planet, miniature humans, a fully automated world populated by robots, and giant, almost Lovecraftian monsters being awakened from centuries of frozen sleep. Four years of excitement with nary a dull moment!

The colors of these Sunday strips range from average to downright amazing! The reproduction here, with a few exceptions, is crisp and sharp, with every line of art clearly visible.

The book starts off with an introductory piece by Rick Norwood, one of today’s great experts on many classic strips. Rick details the uncredited involvement of successful science fiction author Harry Harrison—himself a former sci-fi comics artist—as the writer of stories in this volume. Harrison was in good company as some of Barry’s earlier assistants in various capacities had included Harvey Kurtzman and Frank Frazetta.

In this particular volume, although I can detect a number of different hands involved late in the book, Barry’s main ghost/assistant was Bob Fujitani, one of the great Golden Age comic book artists (The Hangman, the Flying Dutchman, and many more). Fujitani gets a fairly extensive interview here as well.

Barry, who comes across in real life as a largely unliked egotist, may not have been completely hands on for Flash Gordon at times but his nominal stewardship of the franchise for all those years led to some most enjoyable adventures that leave you—as any good book should—wanting more!