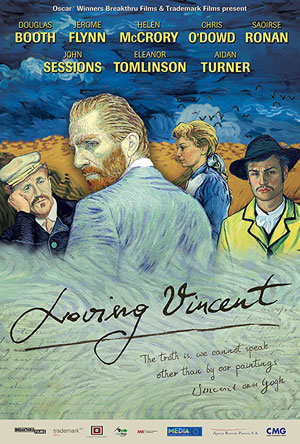 This impressive ode to the life and art of Vincent Van Gogh is the first-ever film in which every frame is an oil painting. The films of Van Gogh come to brilliant life as a friend of his tries to unravel the mystery of his death, but the visuals are more of a draw here than the story.

For fans of the Dutch artist, seeing characters walking through The Starry Night and Bedroom in Arles is like walking into the painting yourself.

Many of the people in his famous portraits, such as that of Dr. Gachet, are key players in the film and seeing them “unfreeze” from their poses is stunning.

The film was first shot with real actors and painters then used that footage as a model for their own painstaking recreation.

There is the nagging issue that these paintings, with their bold interpretation of reality, were, of course, Van Gogh’s viewpoint and it would have made more sense that a film painted entirely in his style should have been told from his POV. There is also the slight disconnect that the film is in English (with a variety of accents), when it is set in France.

The story unfolds much like Hollywoodland (2006), the examination into the mysterious 1959 death of Superman star George Reeves. The long accepted story is that Van Gogh shot himself in a fit of depression. Since he famously cut off his own ear, there never seemed any reason to question that version of events. But a 2011 book uncovered the possibility that someone else shot him, which would make his death either a homicide or a terrible accident.

The investigator of the film is Armand Roulin (Thomas Booth), the son of Postman Joseph Roulin, who has a last letter to deliver from Van Gogh. It takes a moment or two to realize that underneath the lavish whiskers of the Postman, who was painted several times by Van Gogh, is actor Chris O’Dowd.

Van Gogh (Robert Gulaczyk) does appear in the film himself, but only in flashbacks. They’re painted in black-and-white, almost as if we were looking at a newsreel.

Armand travels to Auvers, the town where Van Gogh died, where he hears conflicting stories about his death. Everyone has a different take on the eccentric artist and a different theory about the shooting as well as their own reasons for withholding what they know.

Whether Van Gogh committed suicide or was murdered (as seems more likely), the overwhelming sadness of his life is palpably portrayed. As even the most casual art enthusiast knows, he was a lonely, misunderstood man who only sold one painting in his lifetime. The tragedy of the early death of one of the greatest artists of all time is almost unbearably sad and as underscored by the beautifully melancholy music of Clint Mansell, Loving Vincent is necessarily more elegy than celebration.

If you’re a Van Gogh devoté, you won’t want to miss this film. Purists might scoff at the project, but the overwhelming love for him is undeniable.

At a screening in Los Angeles, filmmaker Dorota Kobiela said that the Loving Vincent began as a short film. When she realized a full-length feature would take her 81 years to complete if only she worked on it, she began recruiting painters and animators to paint in the style of Van Gogh. She ended up with more than 100 animators, including many artists who never thought they’d be able to apply their art backgrounds. She met one painter at a meat counter and another one who was repairing her car.

The final product is 65,000 frames, or 65,000 individual frames, some of which were on display at the screening.

You can see more about the making of the film (and find screenings near you) at the official site: (lovingvincent.com)