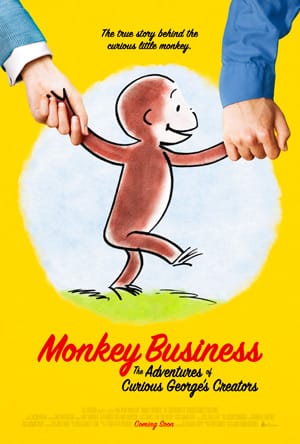 There isn’t a child that is unfamiliar with Curious George and the Man in the Yellow Hat.

The stories have been a favorite of youth for over 70 years. But the tale of their creators, Hans and Margret Rey, is full of as much adventure, love, luck, and joy as any of George’s own tales.

Filmmaker Ema Ryan Yamazaki brings their interesting partnership to the screen in the delightful documentary Monkey Business: The Adventures of Curious George’s Creators.

The series Curious George was first published in 1941, and has since sold over 75 million books worldwide. But the story of how George first made it onto the page starts many years before that, with the relationship of his creators: Hans and Margret Rey. German Jews on honeymoon in Paris while the specter of war was coming ever closer, this documentary follows their meeting, escape from Europe, and immigration to the US to share the story of the famous mischievous monkey we love.

A wonderfully close couple that complimented each other in everything, the true story of their relationship is as engaging as the fictional one that we know them for.  Through interviews with those that knew them well, we learn more about the temperament and inspiration for the Curious George series. Margret and Hans are characters in this retelling through clever integration of drawn animation in the style of Curious George. Seeing the whimsical drawings laid over black and white stock footage adds to the magic of their life, and how special their creations are to have come about in the midst of international devastation.

Interspersing narration of not only life events but particularly applicable selections from different Curious George books, Sam Waterson’s gentle voice leads us from point to point. The long journey to get out of Paris took the Reys over 100 kilometers on bicycle just to get to the train to Lisbon, and then to Rio by ship before receiving papers to come to America. Friends mention how this escape would seem harrowing to most, but the Reys told it in a fashion that shares a lot about the way they approached everything: it was an adventure.

The journey continues in the US, where the contract for Curious George was signed for a mere $1000. Together they created 8 books before the passing of Hans, at which point Margret took over and tended the image of the little monkey so beloved by children. The film covers the period up until her own passing, as well as how George is received today. Using significant footage of interviews with her adds a sharp vibrancy as she is a larger than life persona. It helped to hear some of the details in her heavily-accented words, and to see how fiery she remained even in her later years.

This is one of the most pleasant and interesting documentaries I have seen in a while. Not only does it share a tale that was previously unknown, but it gives depth to a familiar character in all of our lives. To see the adventures of a curious little monkey as a triumph of human perseverance and an expression of the love of two great creators adds immeasurably to the enjoyment. This is sure to win the heart of anyone who views it, and reaffirm the importance of Curious George in popular culture.

Monkey Business: The Adventures of Curious George’s Creators
is now available on Digital HD and On Demand