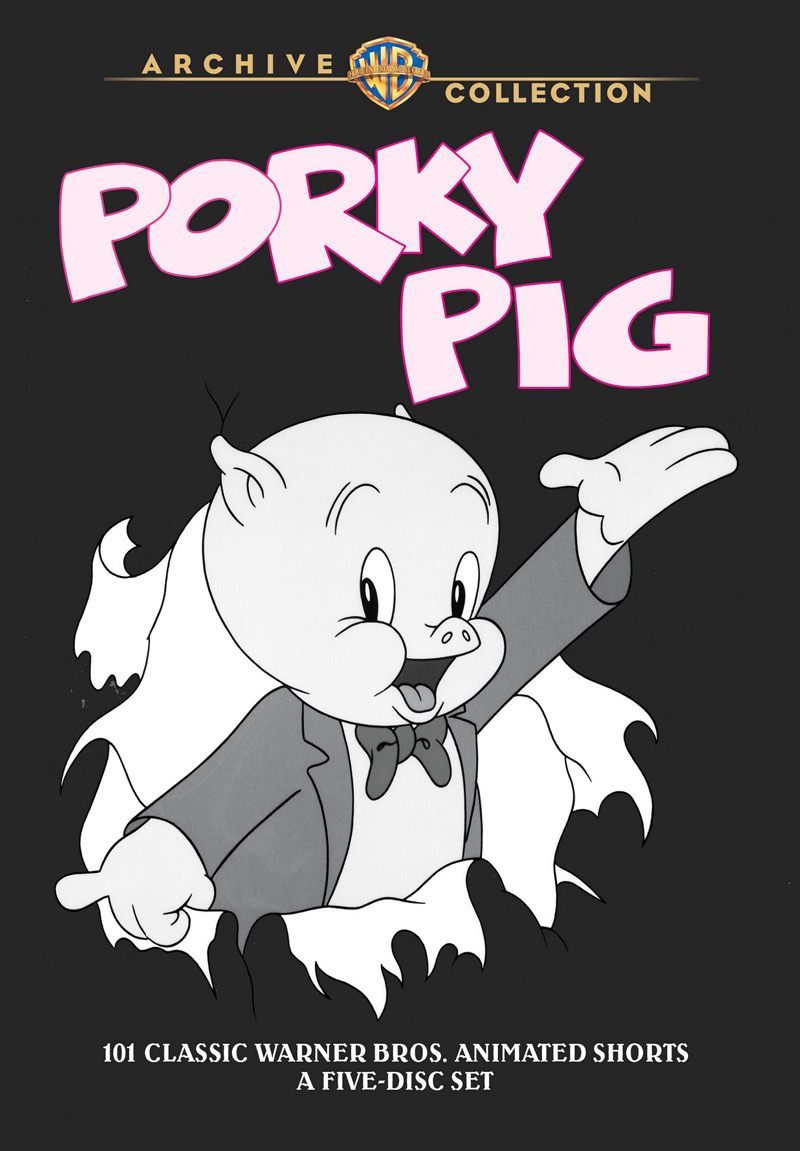 Warner Bros. first cartoon superstar gets an unprecedented presentation on DVD with the Warner Archive Collection (WAC) release of Porky Pig 101, a compilation of everyone’s favorite pants-less porcine – from his humble ensemble beginnings to a signature starring role in the studio’s premier cartoon series, Looney Tunes. Presented in chronological order, with key commentaries on select shorts, the five-disc Porky Pig 101 will be available September 19, 2017 through wb.com/warnerarchive and your favorite online retailer.

From his start as the break-out star of a schoolhouse talent show in I Haven’t Got a Hat to his slimmer, slap-happy sidekick stage alongside Daffy Duck in Porky Pig’s Feat, Porky Pig 101 spotlights the character’s ascent from rascally school gang member to superstar spokespig in this impressive cartoon collection.

Porky Pig 101 arrives from WAC after the long-planned collection’s five-year internal journey, including the restoration and remastering process of 101 animated shorts. Nearly half of these cartoons have had no previous Home Entertainment release in any format. Many have not been seen in decades subsequent to their original theatrical release, or as part of early television-era airings, which came from substandard, edited elements.

All of the cartoons in the collection have now undergone varying degrees of remastering from the best available 35mm elements, including archival nitrate sources.

“Fans will finally see these cartoons just as they were originally seen in the theaters, and that includes some of these treasured shorts – like Slap Happy Pappy and early Chuck Jones works like Porky’s Prize Pony and Porky’s Ant – that actually haven’t been publicly seen in decades,” Feltenstein explains. “We’re especially proud to make all of these cartoons available in one comprehensive collection.”

Porky Pig 101 gives a unique overview not only of the title character, but of the growth and development of the Warner Bros. cartoons, and the incredible animation legends responsible for their creation. That assemblage of Hall of Fame talent includes animators such as Tex Avery, Bob Clampett, Friz Freleng, Chuck Jones, Robert McKimson and Frank Tashlin. Porky Pig 101 also offers insight into the auditory excellence of Warner Bros. cartoons with the impact of Mel Blanc’s arrival at the studio, and his outstanding vocal characterizations leading the studio’s already-impressive array of voice performers, and Carl Stalling’s brilliant musical direction to underscore these shorts with unparalleled wit and acumen.

“What sets WB cartoons apart from the rest of the pack are their incredible pacing and dedication to comedy,” Feltenstein says. “These shorts were created to make people laugh, and some eight decades later, they still do just that. This is truly a must-have collection.”

Note: Porky Pig 101 is Intended for the Adult Collector and May Not Be Suitable for Children.