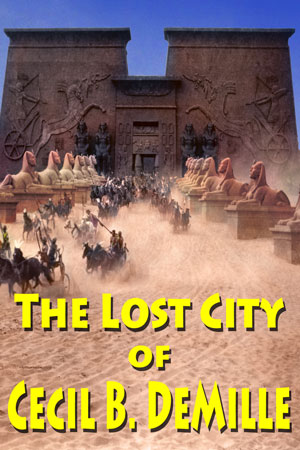 Quite interesting documentary about the 30 plus years’ quest to find the remains of a massive set built for Cecil B. DeMille’s 1923 version of The Ten Commandments.

The set in question was the City of the Pharaoh, which included 20 sphinxes and four 35-ton statues of Ramses.

It was built in the desert area of the central California town of Guadalupe; the production was given the okay as long as DeMille broke the set down and hauled it away after production wrapped. But, as Hollywood legend has it, the sets were NOT hauled away, simply buried in the sand.

Enter documentary filmmaker Peter Brosnan, who, in 1982, heard the legend of the buried Egyptian city and began an adventurous journey to uncover it.

Little did he know of the obstacles – and years of frustration – that lay ahead.

He figured he would just go through the proper channels by hiring an archaeologist and obtaining the proper permits.

It would not go nearly so smoothly.

Brosnan and company’s circuitous process is intercut in the film with the story behind the conception of the silent-era The Ten Commandments, the construction of the city, and the aftermath, including DeMille’s later career and his impact on filmmaking and Hollywood history.

This section of the film is revelatory for casual film buffs: the construction of the set required a tent city of incredible size to be built in the desert. This temporary town of sorts provided shelter for 2500 workers!

There’s a fascinating bit of trivia wherein DeMille is eager to film in Egypt on a later production, a notion that few in Hollywood assumed would come to fruition. Egyptian authorities, recalling DeMille’s even-handed portrayal of the Muslim characters in Commandments, granted the production permission to film there.

We also learn of the great animosity between DeMille and studio head Adolph Zukor. This and other anecdotes are related by or commented upon by descendants of DeMille and others.

We of course circle back to Brosnan and his (literal) digging. Far be it from me to spoil the end result, but film buffs shouldn’t need further prodding to check this doc out.

The Lost City of Cecil B. DeMille arrives On Demand and Digital HD 10/3
For more details, visit LostCityDeMille.com