It’s been wonderful seeing the resurgence of 80s fantasy.  Films that were critical and financial failures at the time – like Krull, Legend, or Masters of the Universe – are finally receiving the respect they deserve.

Historically, 80s fantasy films are fascinating for their mix of special effects techniques, some old and some new.

Because monsters are so important in fantasy films, and because monsters often appear at the climax of the action, special effects technicians – model builders, costume designers, computer programmers, stop-motion animators – were called upon to use their skills to the utmost.

Let’s take a look at six films in which these technicians aimed high and hit their mark.

For the list, I wanted to include not just great monsters, but monsters brought to life via different types of special effects.

I cover each of these films in some depth in my Fantasy Films of the 1980s ebook, but I hope you’ll enjoy my comparisons below. 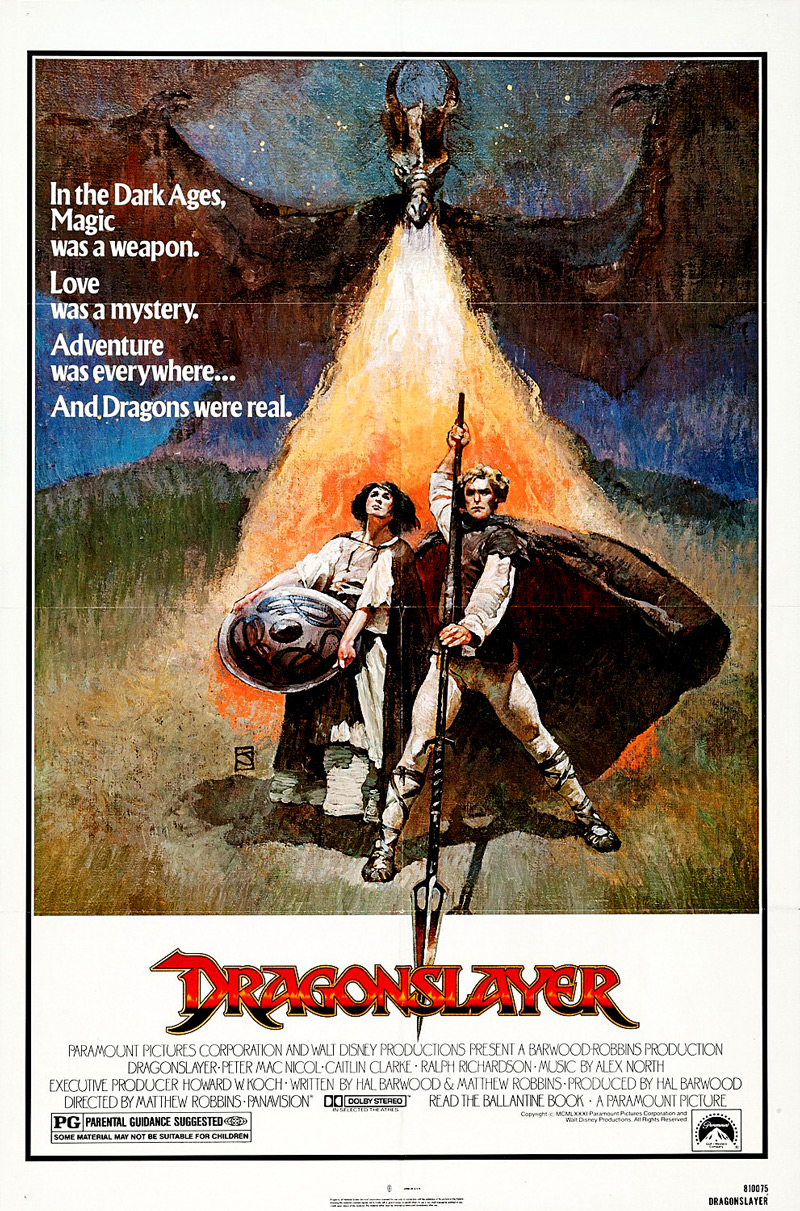 What’s a list of fantasy monsters without a dragon?

Most of us fantasy fans love dragons and prefer to see them triumph in battles with mawkish goody-goody knights.  But there is a place in fantasy for nasty, cruel dragons as well as noble, misunderstood ones.

Paramount’s Dragonslayer offers one of the best evil dragons in fantasy film history.  This dragon – a.k.a. Vermithrax Pejorative – gets augmented by some of the first CGI effects in a feature film.

The dragon itself is mostly stop-motion, but the cameras were computer-programmed to keep their shutters open extra long or to move slightly during filming, creating a subtle blur.  This “go-motion” technique made the stop-motion much smoother than normal.

Roger Ebert called the dragon “one of the meanest, ugliest, most reprehensible creatures I’ve ever seen in a film.” 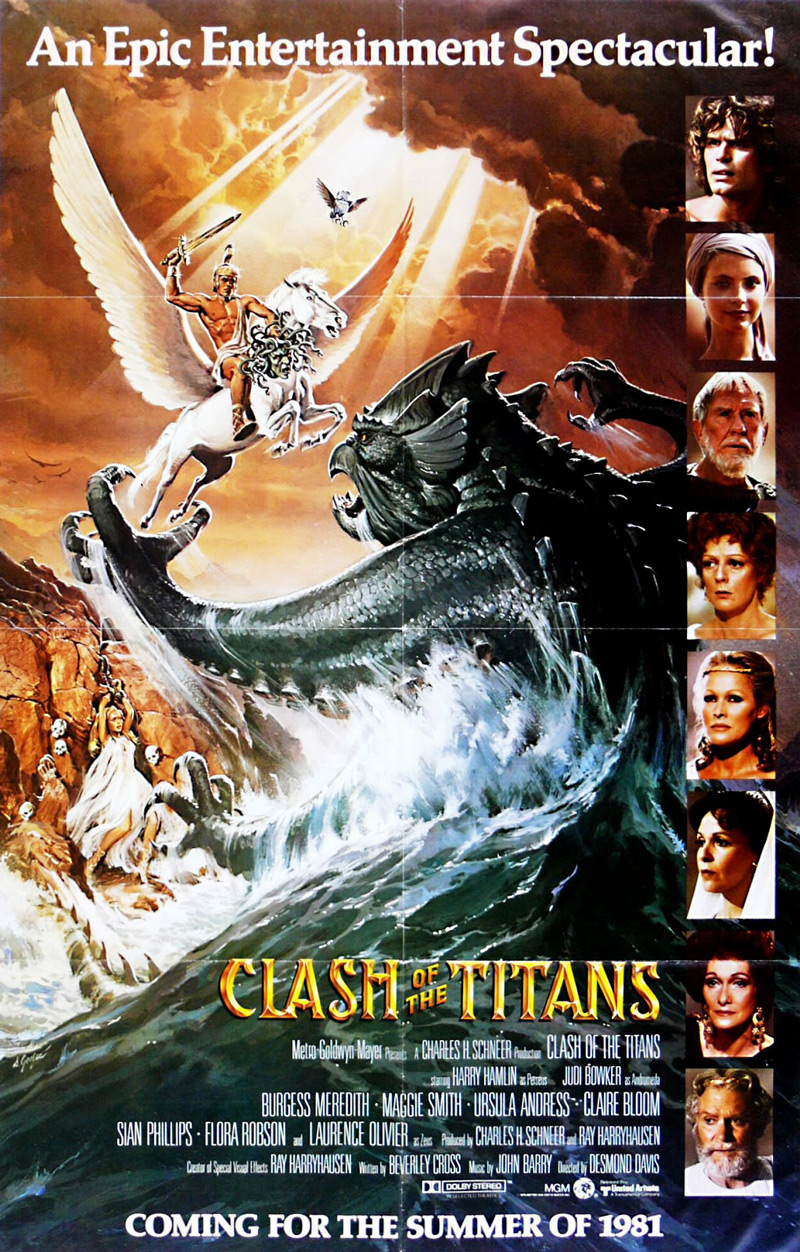 This original Clash of the Titans actually feels like a 60s peplum though it’s technically an 80s fantasy film.  Its monsters come to us in traditional stop-motion, in fact the last stop-motion creations from legendary animator Ray Harryhausen.

Half a dozen stop-motion creatures come to life in the film, and my favorite is usually Bubo the mechanical owl, but the best monsters would be Medusa and the Kraken at the conclusion.

Though the Kraken is gigantic, the Medusa is most people’s favorite.  She’s hideous.  Not only does she have the expected snakes for hair – she also has a snake body!  She’s like a mutated mermaid.

It’s not Harryhausen’s smoothest work, but it might be his scariest.

One reason Medusa looks so convincing on screen is that she was a large model (two feet long) and shot mostly on a life-size set rather than a miniature set. 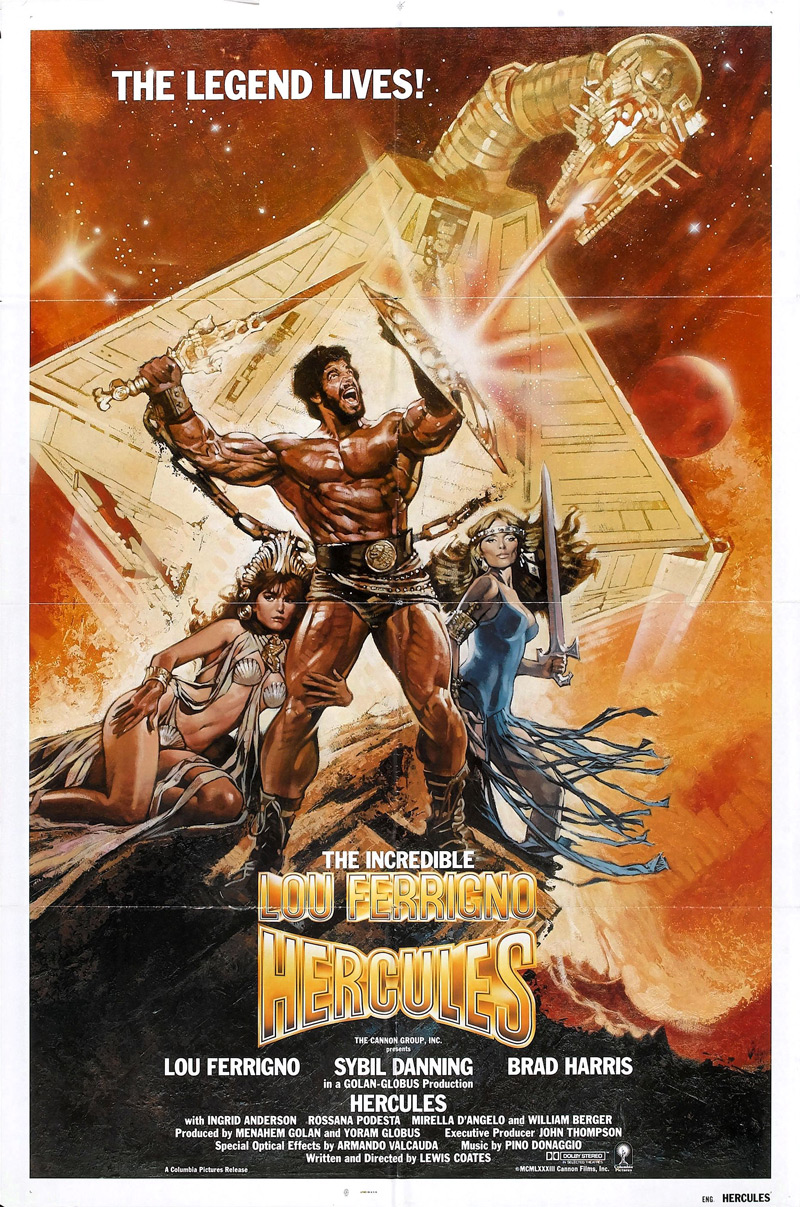 The Italian-made movie has a lowly reputation, partly from an obviously dubbed Lou Ferrigno playing Hercules, but the special effects are actually good.

As with Clash of the Titans, most effects are stop-motion.  Perhaps because stop-motion usually feels somewhat jerky, or perhaps because Bubo the mechanical owl from Titans was so charming, the Hercules filmmakers opted for several mechanical monsters rather than organic ones.

While the battles are brief, they are very fun.  In the clip below, Hercules fights a mechanical centaur on the green isle of Thera.  But can he save Circe from the centaur’s wrath? 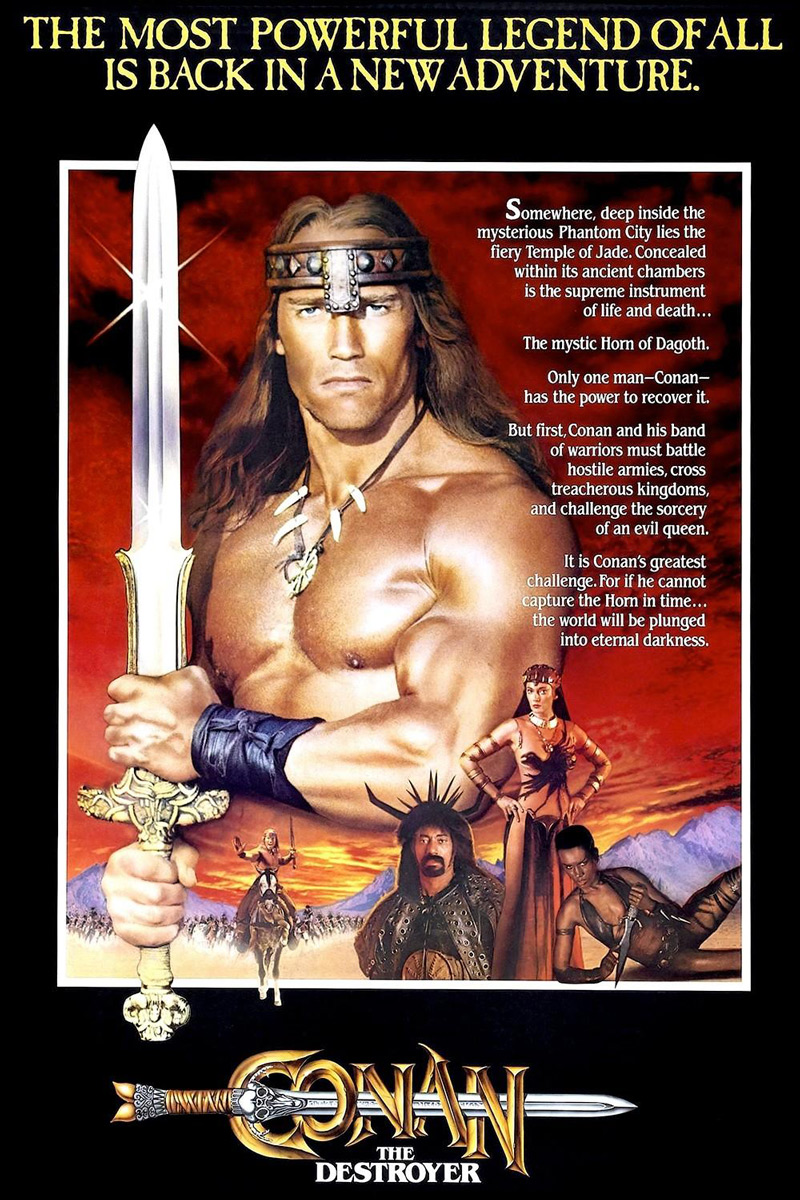 I’m one of the few fans who likes this sequel better than the original 1982 Conan the Barbarian.  One reason: Dagoth in demon form.

Dagoth in statue form looks classical, if a little weird.  But when a sacrifice goes wrong, the statue changes (rather quickly) into a reptilian demon with an insectoid mouth.

Unlike all other monsters on our list, this one is a rubber suit – but it’s a huge and realistic suit worn by the one-and-only Andre the Giant.

Dagoth is so heavy that he cracks the floor when he jumps!  Conan needs a lot of help to beat him. 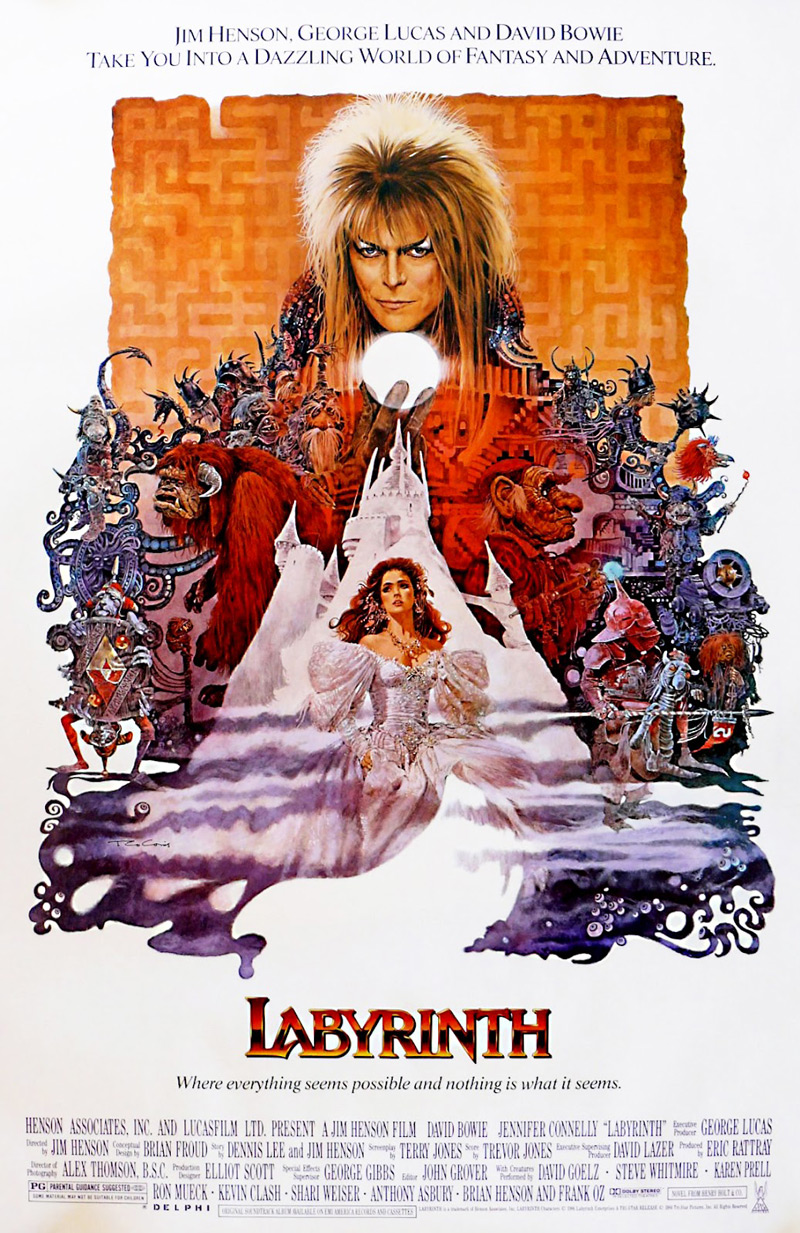 The popular Labyrinth is an obvious choice for this list, but that doesn’t make it any less deserving.

Depending how you define “monster,” there are many to choose from, but I’ll pick the big monster before the climax, the mechanical guard at the gates of the Goblin City.  Sarah and her friends must defeat this axe-wielding guard before they can finally enter.

Jim Henson named the guard “Humongous” though it’s unnamed in the film.  Basically a giant puppet, it weighed two tons (!) yet could be controlled by a single remote.

Jim Henson’s Creature Shop – based in London at the time – built Humongous in less than three months.  Its arms and legs were powered by a hydraulic skeleton, and much of the outer material was lightweight foam painted to look metallic. 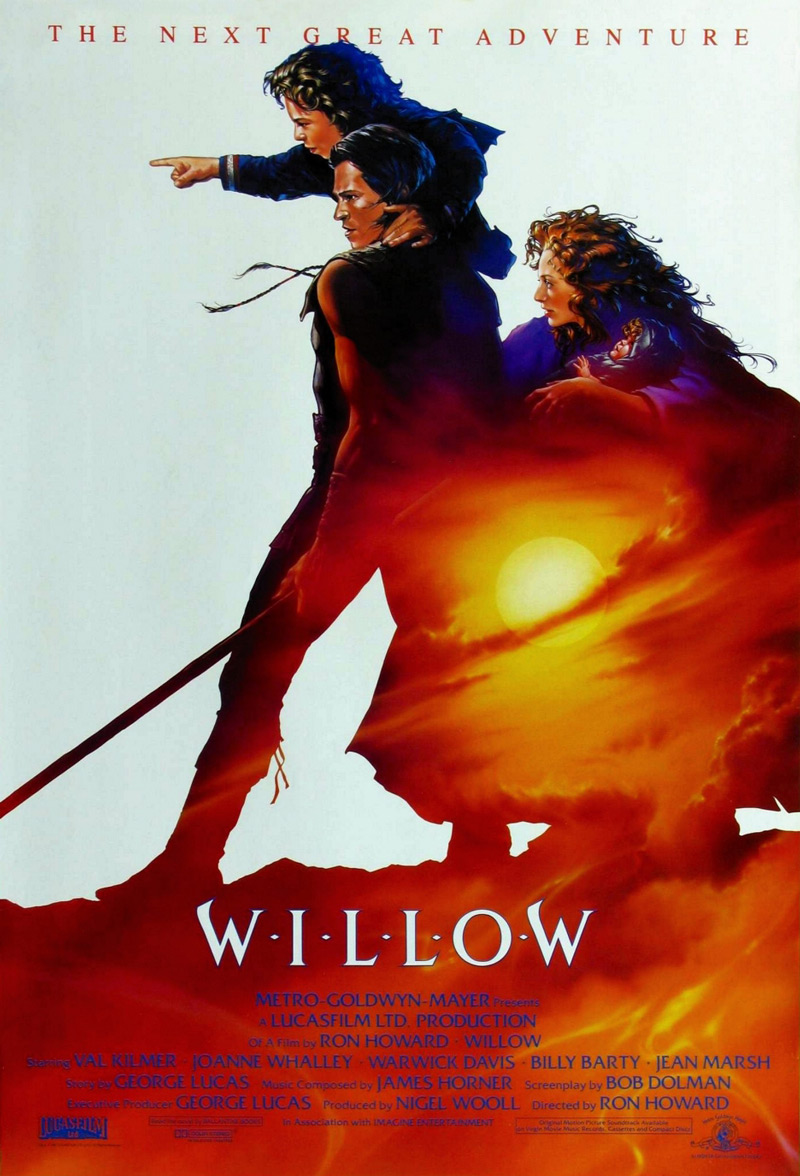 Because Willow comes late in the 80s fantasy cycle, and because the story is filled with clichés, many fans forget how weird it gets when our heroes reach the evil queen’s castle at the end.

At the castle, our heroes confront some dexterous hairy trolls who already might be candidates for this “best monsters” list.  But then Willow’s imperfect magic transforms one troll into an enormous two-headed fire-breathing demon-dragon.

ILM’s Phil Tippett deserves credit for designing one of the grotesque monsters of the 80s.  It took a combination of stop-motion, hand puppetry, and a full scale model head to bring the “Eborsisk” dragon to life.

Willow‘s most famous special effect is CGI morphing, the very first in a feature film.  But I think you’ll agree that the Eborsisk is more intense on screen.