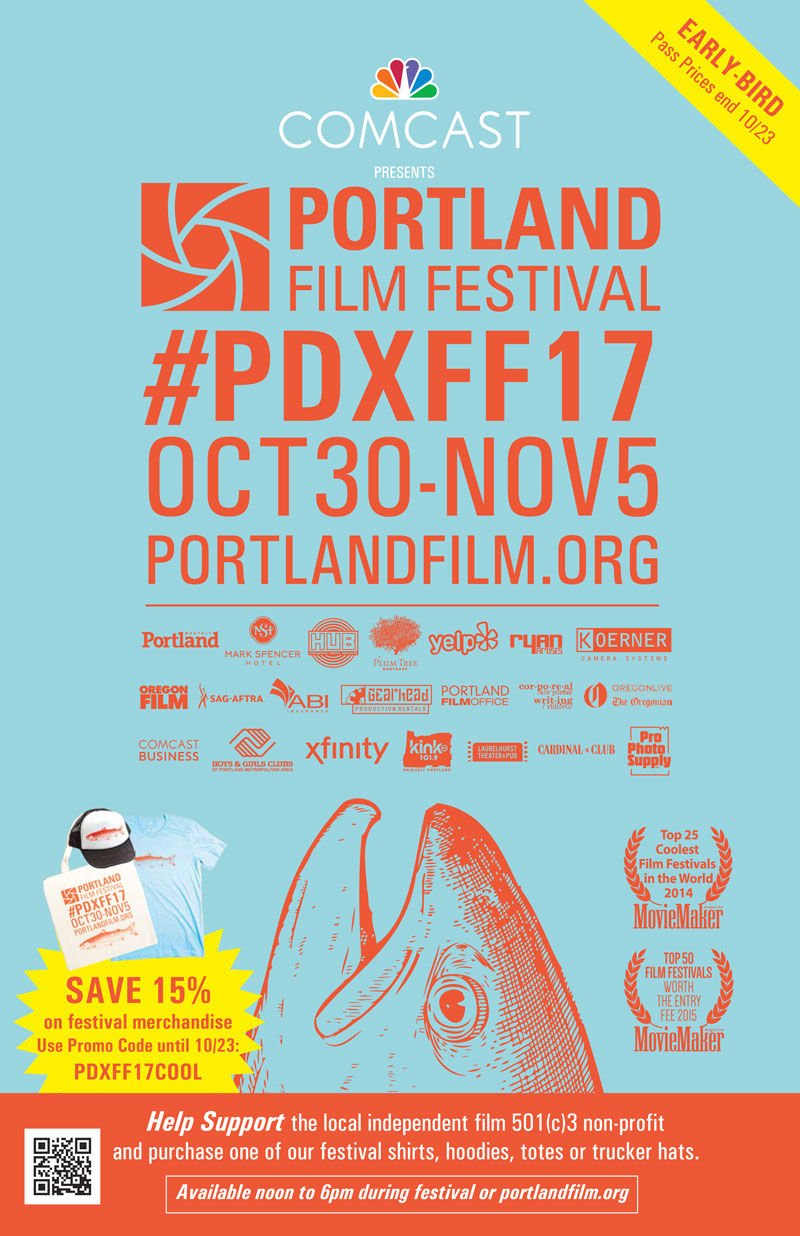 The festival will include special opening and closing night screenings and parties, a Pittock Mansion Gala, educational panels, workshops, special presentations and daily networking events and opportunities throughout the festival.

This year’s fifth edition will present two opening and closing night films (a documentary and a narrative film on each night) and feature and short films in the following sections: Narrative and Documentary Competition Feature, Narrative and Documentary Spotlight, Shorts, Indigenous Voices, Portland Lens, and Special Screenings. This year, 89 of the films programmed (59%) were directed by women.

Said Josh Leake, Portland Film Festival Founder and Executive Director, “Hearing from independent voices has never been more important as it is today. This year’s movies, panels and programs are from engaging new filmmakers, the best of new indie film, and icons of classic cinema. We’re proud to present this year’s program – especially our Portland and Indigenous Voices sections, which will screen films each day to local audiences. In one week, we will present more independent cinema than most theaters screen in a year.”

All screenings will take place at the historic Laurelhurst Theatre at 2735 E. Burnside Street. Tickets, general info and merchandise will be at the Laurelhurst throughout the festival.. Presenting Sponsor Comcast will host The Comcast VIP Lounge at the Cardinal Club, 18 NE 28th Ave.

OPENING NIGHT FILM (Narrative)
ZILLA & ZOE
Zoe, age 10, is obsessed with directing horror films, but to win a filmmaking contest, she must shoot her next film at her sister’s wedding.
Portland | 104min Director: Jessica Scalise in attendance

CLOSING NIGHT FILM (Documentary)
OUT OF STATE
Held thousands of miles from their island home, native Hawaiians inmates and their culture in an Arizona prison.
USA | 82min Director: Ciara Lacy in attendance

BROWN’S CANYON
Two life coaches set out to launch a mindfulness retreat, but soon discover that the Universe has other plans in mind.
USA | World Premiere | 95min Director: John Helde in attendance

A SIBLING MYSTERY
A brother and sister become consumed with investigating a mysterious woman they suspect has stolen their lottery ticket.
USA | 81min Director: Dan Erickson in attendance

THE VALLEY
An immigrant entrepreneur’s seemingly idyllic life is shattered by the suicide of his daughter.
USA | 100min Director: Saila Kariat

WE WERE ÍSLANDS
Strangers to lovers to strangers again.
USA | 80min Director: Amrita Pradhan in attendance

Six new films from around the world that tackle real life stories with bold vision and energy.

DAS WA$$UP
Follow the musical group ‘Yo Majesty’ through its trials and tribulations in the music industry.
UK | 96min Director: Johannes Schaff in attendance

DIRT BAG: THE LEGEND OF FRED BUCKLEY
Fred Beckey is the iconic “Dirtbag” mountaineer who rebelliously conquered peaks and lived life on his own terms.
USA | 96min Director: Dave O’Leske in attendance

ON A KNIFE EDGE
A Lakota boy learns what it means to enter adulthood in a world where there are no sidelines.
USA | 90min Director: Eli Cane in attendance

OUT OF STATE
Held thousands of miles from their island home, native Hawaiian inmates and their culture in an Arizona prison.
USA 82min Director: Ciara Lacy in attendance

Unique films, marquee names, and highlights of the best of modern film.

20 WEEKS
A couple must decide on how to move forward when their baby is diagnosed with a serious health condition at the 20 week scan.
USA | 89min Director: Leena Pendharkar

200 HOURS
A group of graduate students conduct a sleep deprivation study in the 80s, but something goes terribly wrong with a test subject.
USA | 91min Director: Phillip Guzman

AXIS
On the morning he is set to star in a career-changing film, an Irish actor trying to live down his rocky past confronts a series of events that threaten his sobriety.
USA | 85min Director: Aisha Tyler

D-LOVE
Not all who wander are lost.
USA | 97min Director: Elena Beuca in attendance

DIM THE FLUORESCENTS
A struggling actor and playwright pour their creativity into the only work they have: office role-playing demonstrations.
USA | 128min Director: Daniel Warth

DIRTY LAUNDRY
The search for a missing mob boss’ finger is on and laundromat employees Wim and Kevin are caught in the middle.
South Africa | International Premiere | 101min Director: Morne du Toit

FOR NOW
Four twenty somethings take a road-trip through California, only to confront their relationships with one another.
USA | 80min Director: Hannah Barlow in attendance

GUN
A washed up, ex-prize fighter makes a comeback to boxing after his top heavyweight contender son is blinded in the ring.
USA | 90min Director: Sam Upton in attendance

HER SIDE OF THE BED
When two best friends share an intimate night, everything changes.
USA | 102min Director: Bryn Woznicki in attendance

INSTRUCTIONS FOR LIVING
A depressed woman discovers the bucket list of her deceased fiancé and sets off on a journey to redeem his last wishes.
USA | West Coast Premiere | 76min Director: Sarah Heinss in Attendance

KHALI THE KILLER
When white kids jack his Hyundai full of cash, an East L.A. hit man must come out of retirement for one last job.
USA | World Premiere | 86min Director: Jon Matthews

KUPAL
You can’t be alone in this world!
IRAN | 81min Director: Kazem Mollaie

LAURA GETS A CAT
Laura tries to juggle an unexciting boyfriend, an affair with a performance artist, and a vivid imaginary life.
USA | 83min Director: Michael Ferrell

SECRET SANTA
When a Xmas gift unleashes her family’s inner demons, April will try to save those she can and survive those she can’t.
USA | USA Premiere | 89min Director: Adam Marcus in attendance

THE VELOCIPASTOR
A priest gains a mysterious ability that allows him to turn into a dinosaur, which he uses to fight crime and ninjas.
USA | World Premiere | 71min Director: Brendan Steere in attendance

CATCHING SIGHT OF THELMA & LOUISE
Revisit the extraordinary journey of Thelma & Louise through the lens of viewers who saw the namesake film in 1991.
USA | 87min Director: Jennifer Townsend in attendance

DRIFTING TOWARDS THE CRESCENT
As the diesel barges ply the Mississippi River, the river no longer needs the towns, but the towns still need the river.
USA | 84min Director: Laura Stewart

LAST SONG TO XENITIA
Centenarian poet journeys to Greece, endeavouring to pass on an ancient oral tradition to the next generation.
USA | 74min Director: Athena Scotes

NOT A WAR STORY
Hollywood collides with a group of veterans who decide to make an original lm without any experience.
USA | 83min Director: Tim O’Donnell

ON A KNIFE EDGE
A Lakota boy learns what it means to enter adulthood in a world where there are no sidelines. DOCUMENTARY
USA | 90min Director: Jeremy Williams in attendance

THE WATCHMAN’S CANOE
A young girl of mixed Caucasian and Indigenous descent moves to a reservation where she struggles with local bullies. NARRATIVE
USA | 101min Director: Barri Chase in attendance

WHEN THEY AWAKE
A generation of established and emerging Indigenous musicians in a moment of cultural and political resurgence. USA Premiere. DOCUMENTARY
Canada | 91min Directors: P.J. Marcellino & Hermon Farahi in attendance. Special music guests in attendance.

Celebrating narrative and documentary films made in Portland and/or by Portland filmmakers.

ALIEN BOY
One man’s struggle with schizophrenia and examines the actions of the police officers responsible for his death. DOCUMENTARY
Portland | 90min Director: Brian Lindstrom in attendance

BENEFITS OF GUSBANDRY
One woman, one man, a lot of weed, a little crying, and no sexual attraction whatsoever. NARRATIVE
Portland | 99min Director: Alicia J. Rose in attendance

BUZZ ONE FOUR
The mystery of two thermonuclear bombs crashing 90 miles from Washington DC explored by the grandson of the pilot. DOCUMENTARY
Portland | 60min Director: Matt McCormick in attend.

ORACLE
A trio of sisters make a documentary film about the true nature of the world, on the eve of a possible apocalypse. NARRATIVE
USA | World Premiere | 89min Director: Hale Mednick in attendance

TOMORROW, MAYBE
An ex-con father reconnects with his daughter, who might not be so willing if her life wasn’t suddenly falling apart. NARRATIVE
Portland | 84min Director: Jace Daniel in attendance

THE WATCHMAN’S CANOE
A young girl of mixed Caucasian and Indigenous descent moves to a reservation where she struggles with local bullies. NARRATIVE
USA | 101min Director: Barri Chase in attendance

A curated selection of special-event new films, classics and surprises.

DARKEST HOUR
During the early days of World War II, the fate of Europe hangs on the British Prime Minister Winston Churchill, who must decide whether to negotiate with Hitler, or fight on against incredible odds.
UK | 2017 | 125 min Director: Joe Wright

OVERBOARD
A cruel and beautiful heiress cheats over a hired carpenter. When she gets amnesia, he decides to introduce her to working-class life by convincing her they’re husband and wife.
Screenwriter Leslie Dixon in attendance
USA | 106min Director: Garry Marshall

THE SINS OF MY FATHER
The incredible story of Pablo Escobar, the infamous boss of Colombia’s Medellin drug cartel, told by his son Sebastian and his widow Maria Isabel Santos.
Argentina & Colombia | 94min Director: Nicolas Entel in attendance