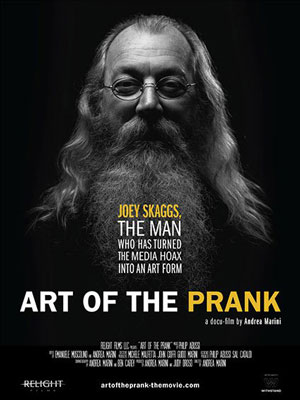 Since the inventions of the internet, the art of pranking has taken new heights to the delight or dismay to us all.

Andrea Marini’s Art of the Prank, explores not just artist/hoaxer Joey Skaggs’ pranks, but also its execution from just an idea to its completion long before the age of social media.

Combining behind-the-scenes footage with TV footage, Skaggs is an acquired taste which has raged against the system dating back til the Vietnam War.

What made Skaggs unique was his ability to flip-the-script on his audience and go against the art norm of the 60s by having hippies make fun of the elite class.

Art of the Prank is filled with a plethora of interviews from actors, friends and those who were assisting with his pranks. While these are great opportunities to delve in the mind of a man who once convinced people a dog whorehouse existed, Marini unfortunately wastes everyone’s time involved with this documentary (including the audience) with bland uninformative questions that feels like an amateur interview a first-grader would give. Watching the documentary, its clear to see the passion in the interviewees eyes, yet Marini never asks more personal questions the interviewees seem delighted to share. As a result, the audience and Skaggs’ fans suffer the most.

From there Art of the Prank meets its drastic demise, as Marini seems incapable of updating the audience on Skaggs newest material. Losing its coherency, Marini plays a sloppy guessing game filled with false information, confusion and lack of direction where it becomes tiresome and stale the more it continues.

Rather abruptly, the documentary dives into Pandora’s Hope, Skaggs’ fake documentary about the hidden side of paradise of Kauai, Hawaii; where science and nature collide in the form of GMOs and stem cells. Described as an Island of Dr. Moreau, the project seems promising and more intriguing than the time and energy of Marini’s own documentary.

Art of the Prank is a hopeful documentary that goes nowhere quickly. It raises more questions than answers and the audience never learns anything personal about Skaggs personal life, which surely seems fascinating. Art of the Prank missed its opportunity to please old fans while introducing new fans to this wonderful prankster, instead it managed to become dreadfully uninformative and boring.

Clumsy, lazy and generic, Art of the Prank has pulled off the greatest prank by fooling us all by thinking this would be worthy of our time.