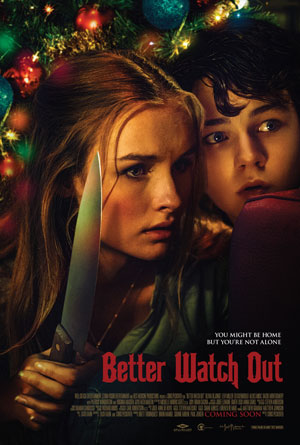 It’s the Christmas season in an upscale suburban neighborhood and twelve-year-old Luke is awaiting the arrival his babysitter, Ashley.

This night will be Ashley’s last night babysitting Luke and Luke hopes to express his romantic interest in Ashley.

Everything is going seemingly well until a string of strange occurrences such as doors left open, the delivery of a pizza no one ordered, and a brick through the window.

It soon becomes obvious that someone else is in the house and means Luke and Ashley harm, but no one knows who it is and why they are there.

Better Watch Out is a tense but funny film with a solid story. Writer director Chris Peckover has constructed a tense situation with a couple of clever reveals and set pieces that push the envelope. The story is backed by a solid cast of actors, with the three young leads being the most impressive. Levi Miller as Luke, Ed Oxenbould as Garrett, and Olivia DeJonge as Ashely are the solid core of the film. Plus, fans will recognize Oxenbould and DeJonge as the stars of 2015’s The Visit.

Better Watch Out is a fun and frightening good time and soon to become a holiday classic amongst genre fans. If your looking for something with plenty of tension, some unexpected story shifts, and a sly sense of dark dark humor you should add Better Watch Out to your must watch list.

Better Watch Out opens in theaters and On Demand October 6th