With Halloween coming upon us faster than we might like I thought we would continue this with the two “name” TV series of the late horror cycle that each had their own ups and downs. This time, it’s Friday the 13th – The Series.

Friday the 13th: The Series was based on the idea of the date being unlucky rather than the more famous masked killer (despite both being produced by Paramount). Lewis Vendredi made a deal with the devil for power on earth and in exchange he would sell cursed antiques through his antique store (Curious Goods). Feeling guilty after a bit, Lewis goes back on the deal and old scratch cashes in the soul. Lewis’ niece and nephew along with a former ally now are tasked with finding and storing all of the cursed items in a magic vault… usually with the objects creating quite a bit of carnage along the way. The show was also called Friday’s Curse in some countries for some reason.

The main characters for Seasons 1 and 2 were Louise Robey as Micki Foster, John D. LeMay as Ryan Dallion and Chris Wiggins as white warlock, Jack Marshak.

Dallion wanted to leave the show after the second season and was replaced with Steve Monarque as Johnny Ventura, a character we had encountered earlier that season. The awesome R.G. Armstrong would appear now and then as Lewis Vendredi in his various attempts to escape hell and there was an attempt at a helper character for the Curious Goods people in Rashid (Elias Zarou) who would show up now and then and render aid where needed.

The show was quite good with an anthology feel to it, all the while having continuing characters. The stories were usually about the cursed object of the week being located and the characters needing to venture into the world to retrieve them… typically with a great deal of death involved. This being a daring series it did not always end up going well as there were episodes were the object of the week was not retrieved (sometimes followed up on in a later season) and most of all any person who got close to our characters usually ended up dying a violent bloody demise. This I guess was an extension of the curse placed on the objects and those who sought them.

The objects themselves were also unique. These being antiques allowed for a great variety of things which didn’t always correspond to whatever power the user thought they should. In a few cases the evil objects would even be used to (attempt) good deeds.

In the episode “Night Prey” a heartbroken man is selling his humanity to a cursed cross in order to kill the vampire clan who murdered his wife. Another episode (“Scarecrow”) forces our heroes to use one of the objects themselves in order to secure another object. There was even one episode that was simply supernatural with no cursed object at all (“Midnight Riders”). Other episodes would play out with our protagonists almost as supporting casts such as “Badge of Honor” did where the story plays out nearly unconnected to the characters.

Key episodes would show that the people abusing the power of the cursed objects were far from evil but were instead immersed into a mindset of rationalization and blindness to the chaos around them… caused by them. Others had the doomed users unaware of the consequences which may await them.

The series was ever evolving. It was also extremely graphic in violence AND in skin. See, this was 1987 and Tales From the Darkside had created a new First Run Syndication boom and since First Run Syndication programs were far looser with restrictions than their network brethren this led to a gore and sex factor that a network series just could not match. This also made the episodes a lighting rod of controversy.

Lasting for a total of 72 episodes over three seasons, Friday the 13th was always a nice killer show to watch.  It’s ratings were also impressive, usually coming in just behind another Paramount show, Star Trek: The Next Generation, which debuted at the same time. In fact a third Paramount show, War of the Worlds, was even gorier, but that was far lower rated than it’s sister shows.

With strong ratings and a stable budget why was Friday the 13th: The Series cancelled at the end of the third season then? It was a combination of factors.

One was that Paramount was starting to get sick of the non-stop controversy surrounding the show (the aforementioned gore and skin) and then the episode “Hate on your Dial” aired. This was a tale of a man going back in time to help his father get away with murdering a black civil rights leader in the 1960’s using a cursed radio. Ku Klux Klan members, burning crosses and the use of… um colorful language to describe blacks was simply too much controversy this time. Couple this with the fact that Paramount had just lost the soundstages in Canada where the sets where built and this forced them to simply cease production.

This was a shame as the show never really got a proper resolution as they were cancelled only 20 episodes into the third season and production was ceased immediately, not allowing for a series finale of any kind. The show simply ended.

The show kind of found a second life on The Sci-Fi Channel in the early 1990’s where it was a staple of their programming for many years, including marathons every… Friday the 13th.

Fondly remembered today by those who grew up watching it Friday the 13th – The Series is an interesting show. The entire series is collected into season sets as well as a complete series DVD boxed set which can be found quite affordably. 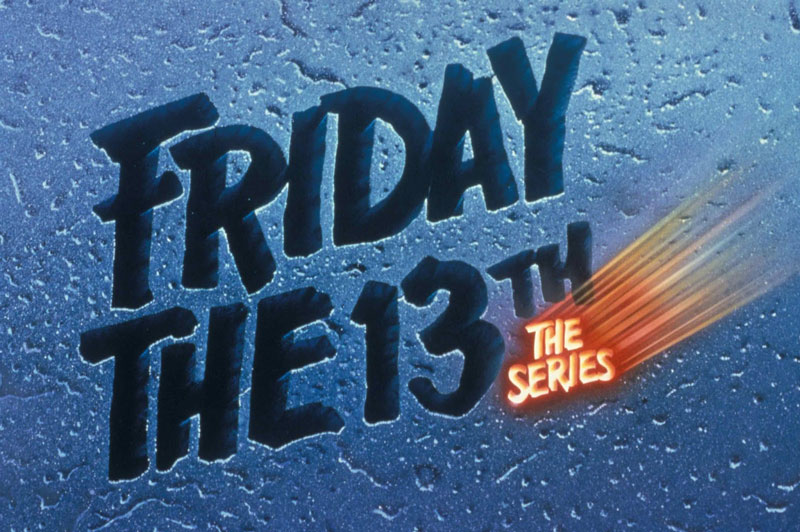 Give Friday the 13th: The Series a shot and maybe you will find it unique and fun.