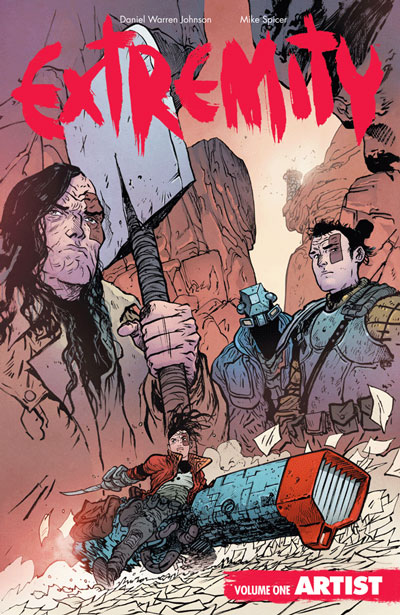 I knew as soon as I read the preview for Daniel Warren Johnson’s comic Extremity that I was going to have to own it in book form.

In just the first few pages, Johnson paints a haunting picture of the loss of innocence along with one of the gorier plot devices in recent memory.

The first volume not only to create compelling characters who make the plot believable enough to hurt, but also an fantastical setting that looks like a cross between the world of Avatar and Marvel’s Weirdworld.

The main characters in this story are brother and sister Rollo and Thea, and their father Jerome, leader of the Roto clan.

The comic starts with a flashback to the events that drive the events of the story: an attack by the rival Paznina clan that kills Rollo and Thea’s mother, and robs artist Thea of her dominant drawing hand. Johnson used this initial tragedy to explore not just loss and grief, but the perpetual cycle of tragedy and revenge that plays out as the Roto clan seeks to repay the Paznina in kind.

Although Thea is undeniably the central character, the comic devotes sufficient time to explore how Rollo and his father adjust to their respective roles within the clan in light of their losses. As more characters are introduced in the story, the more nuance and shades of grey become apparent, making it difficult to find a moral high ground to hold the protagonists to.

As raw as the story that Johnson writes, it is his artwork (colored by Mike Spicer) that does most of the emotional heavy lifting.

There is gore to be found within, but the shot of Thea attempting to redraw an earlier sketch with her non-dominant hand cuts me deeper than any of the violence depicted within. Watching Jerome mask his mourning for his wife with righteous anger or Rollo at a loss for how to comfort his sister is made no less real by the floating castles and speeder bikes in the background. Although this is not Daniel Warren Johnson’s first comic, Image’s decision to give him his own title has been validated, giving fans of Image Comic another original story to support.

Hopefully this comic is given the chance to expand the world we’ve been shown so far, because the first volume is one of 2017’s best.