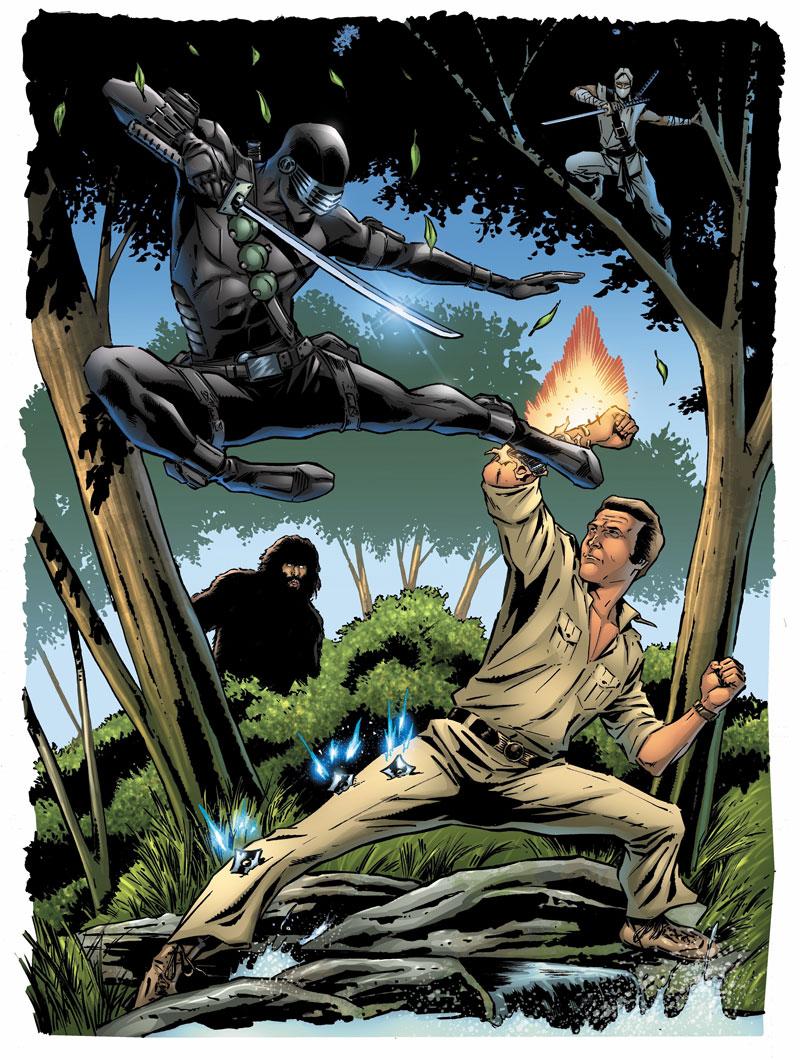 Yo, Steve! The Six Million Dollar Man (aka Steve Austin) and G.I. JOE: A Real American Hero, are teaming up for a 4-part comic book crossover from IDW and Dynamite Entertainment beginning January 2018.

The series will be scripted by rising star writer (and FOG! alumni) Ryan Ferrier (TMNT: Dimension X, Rocko’s Modern Life) with art by SL Gallant, who has achieved an epic run on G.I. JOE: A Real American Hero, alongside legendary G.I. JOE writer, Larry Hama, for over 75 issues.

“To say Shannon and I are having fun with bringing these two iconic properties together would be a massive understatement,” said Ferrier. “We are going full-tilt and no-holds-barred with this story. It’s everything we love about G.I. JOE, the classic characters, and massive action, colliding face-first with the steel-infused, secret agent coolness of The Six Million Dollar Man. We are chomping at the bit for everyone to read this comic with a kung fu grip.”

“Ryan and Shannon have found the perfect story to tell,” said IDW’s Editor in Chief, David Hedgecock. “Fans both new and old are going to be amazed at what this creative team is putting together. This series beautifully blends all the classic tropes of the characters while simultaneously creating something exciting and fresh. We are thrilled to be working with this team and with the fine folks at Dynamite to bring this series to the fans.”

“G.I. JOE and Steve Austin, The Six Million Dollar Man, are two pop culture mainstays who have influenced the comics industry for years,” said Dynamite CEO/Publisher Nick Barrucci. “We’ve had great runs with our Six Million Dollar Man series, and long been admirers of IDW’s ongoing G.I. JOE series. Now is the time for these two to cross-over and we couldn’t be more excited to be collaborating on this event series, and working with our good friends at IDW.”

Variant covers will be provided by John Cassaday, Ken Lashley, and Mike Zeck. Special action figure covers will also be may orderable from your local comic shop. Subject to availability while supplies last.

The action-packed cross-over event of 2018 kicks off this January!