If I were to tell you that the terms ‘alpha blending’, ’bent vertex normals’ or ‘multi-mesh brushes’ were part of the everyday lexicon of a hairdresser, chances are you’d believe me. I could certainly do with some alpha blending myself.

You’d be right to believe me too as these terms do relate to hair, albeit in the non-traditional sense. You see, video game tresses require specialist technical ability and more often than not, developers will hire a specialist virtual hair creator or stylist who works solely on designing and creating character hairdos. 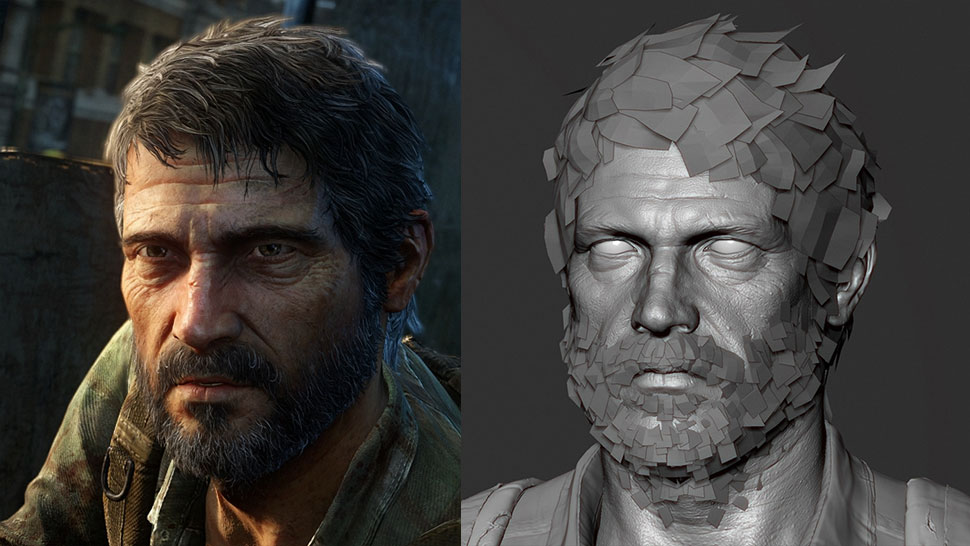 Getting character hair right in video games, or more specifically real-time hair that reacts to it’s surroundings appropriately, has been a long and arduous challenge for game designers and it requires a specialised talent and skill. If a hair stylist is master of their craft, so too are the character artists that create computer generated follicles. In my opinion, the latter makes for a better hairdresser because I detest the awkward small-talk about weather I’m subjected to in salons.

TressFXHair is not the name of an up and coming barbershop or salon. It was created by computer tech giant AMD and is a real-time rendering technology that allows characters hair to respond to in-game environments realistically, it’s the reason that Lara Croft’s hair in the 2013 reboot of the Tomb Raider series responds so accurately to the changing weather conditions.

That was just the first step because AMD have since improved upon this technology with PureHair, a collaborative solution with Eidos Montreal. Other companies are following suit, perhaps the most impressive I’ve seen so far comes from NVIDIA with HairWorks 1.1 which can render 500,000 individual strands. 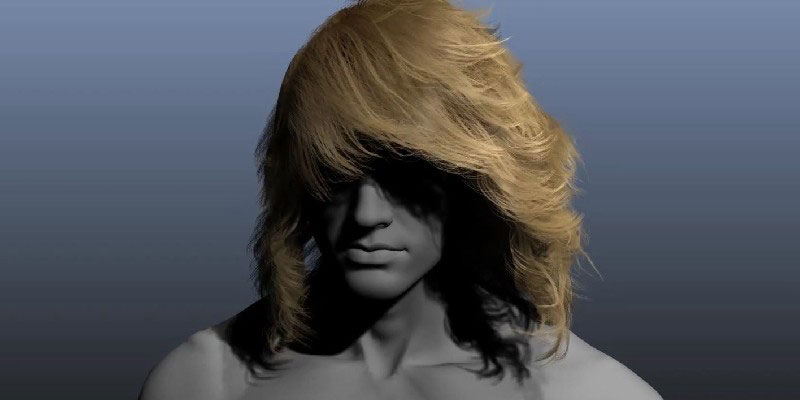 In 1996, Lara Croft’s plaited braid didn’t move due to the technical restraints of the time and we all know that underneath Mario’s red cap, lurked a permanent bad hair day. Well, that or it was a clever way to avoid rendering it.

It’s obvious with tech like TressFXHair that those days are far behind us, much in the same way no self-respecting contemporary stylist would go near the 80’s mullet or perm. Modern games are able to replicate and animate each strand or fibre with precision and realism.

Of course, it’s not all about realism in video games because some of the most iconic and memorable gaming hairdos exist because they are virtual and not confined by the limitations of real hair. 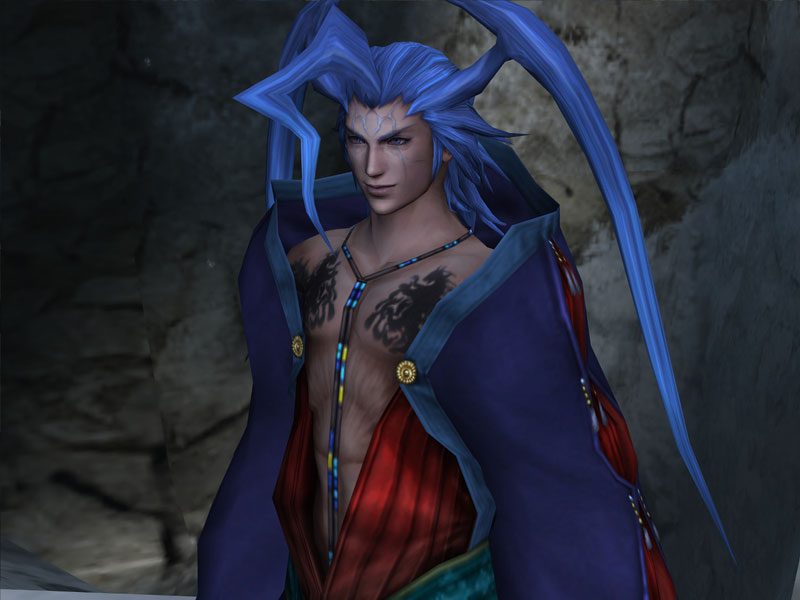 Look to the Final Fantasy series and you’ll find the most ludicrous examples that laugh in the face of physics or practicality. Seymour from Final Fantasy X probably needed to require architectural planning permission for his hairdo.

Gravity holds no weight when it comes to Cloud Strife’s pointy ‘do, or his oversized Buster sword for that matter. Yet, cosplayers adore emulating his hair and who can fault them because it’s a visually interesting style. 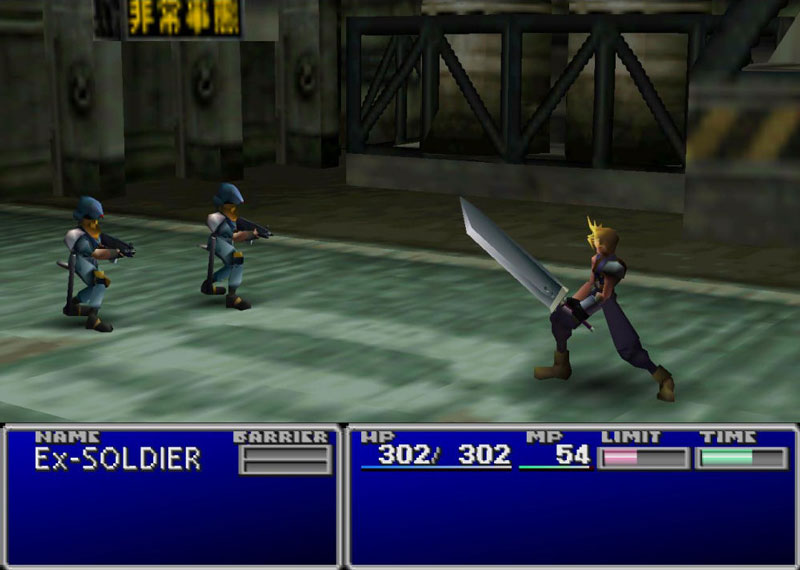 Then there’s Guile from Street Fighter II, whose hair looks as though it would make a great coffee table or shelving unit. The flat top stays put even during his signature Sonic Boom move, one can only imagine the amount of gel he gets through to keep it so horizontal on top. 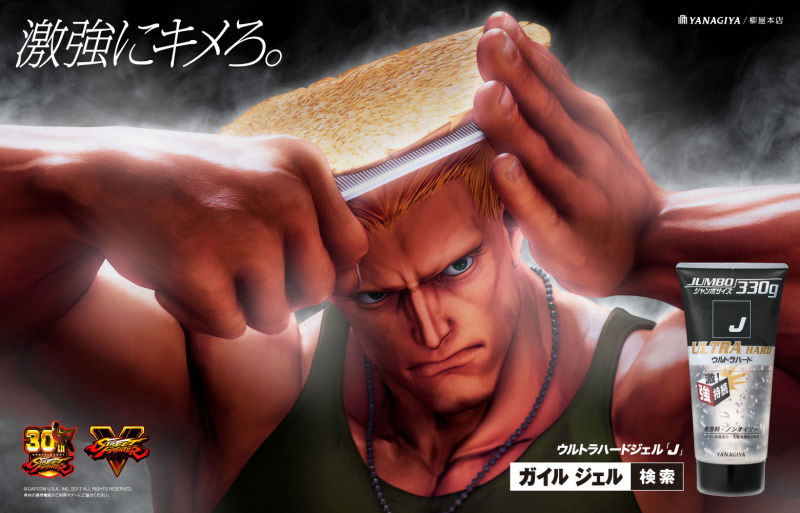 Recently in Japan, Guile has become the face of a Japanese cosmetic company, Yanagiya for whom he advertises hair gel. J-Gel even constructed a “photoshoot” for the product. As far as brand reps go, Guile’s look makes him the perfect candidate.

If Guile is the brand rep for hair gel then Bayonetta is the icon of…hair-suit weaponry? With locks that can be manipulated into a magical hair-suit and summoned at will she never has to face bad hair days. If only I could will my unruly mane into place every morning and avoid the unnecessary hassle of brushing and styling it, I’d have more time to dedicate to the important things in life like gaming. 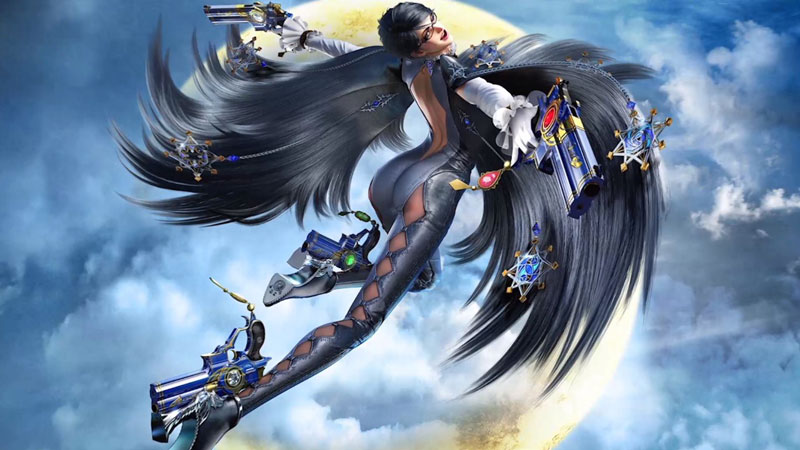 Then there’s the detective/guitarist Daryan Crescend from Apollo Justice: Ace Attorney whose hair defies all logic, how it doesn’t impede his detective work or get in the way amazes me. Also, I think someone ought to tell him it looks like an overly phallic pompadour wig. 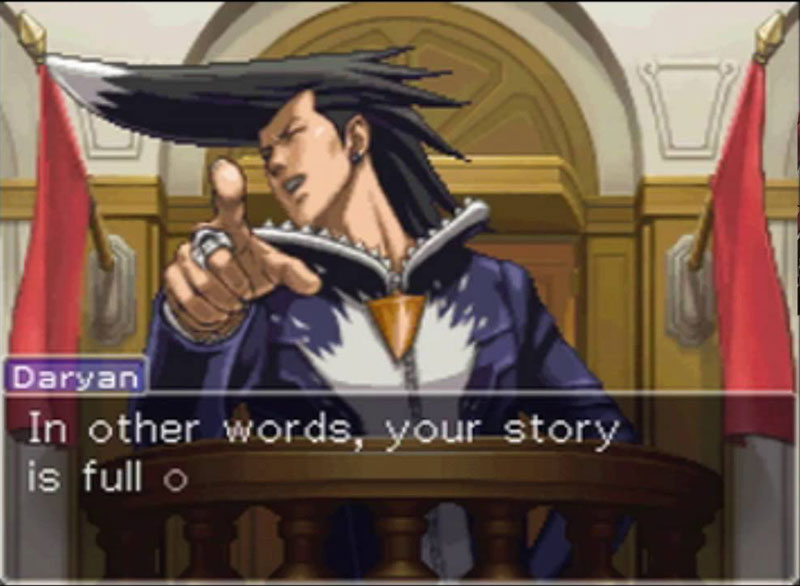 Remember that weird cash-in on ageing metal bands and Jack Black? While Brütal Legend was a pastiche of the hair-metal genre, I still can’t forgive it for creating one of the worst styles in gaming history. General Lionwhyte makes Super Saiyan hair look basic, it not only looked awful but it was animated badly too. 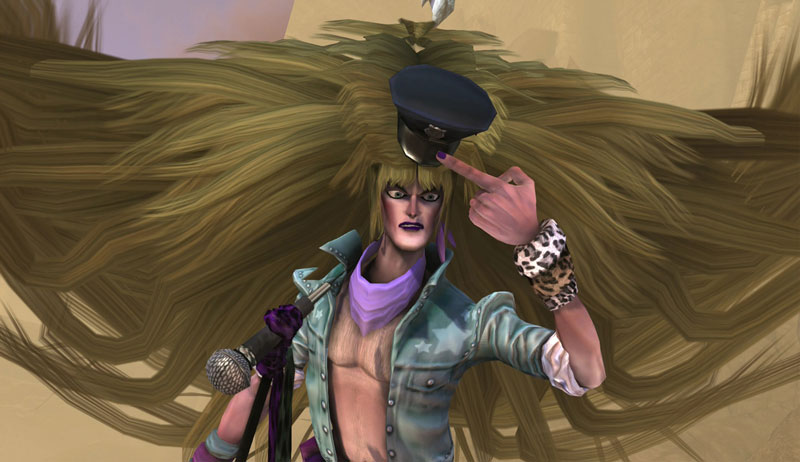 I can only imagine how his long mane would look using one of the new technologies available to developers today, my guess is that it’d be golden and luscious like a shampoo commercial, maybe he’d be one of the models for L’Oreal. I mean, if Guile can sell products in Japan then I don’t see why not.

Another hair type that has grown (excuse the pun) in detail in recent years is black hair, designers have had problems depicting its visual texture in the past or have outright ignored it. 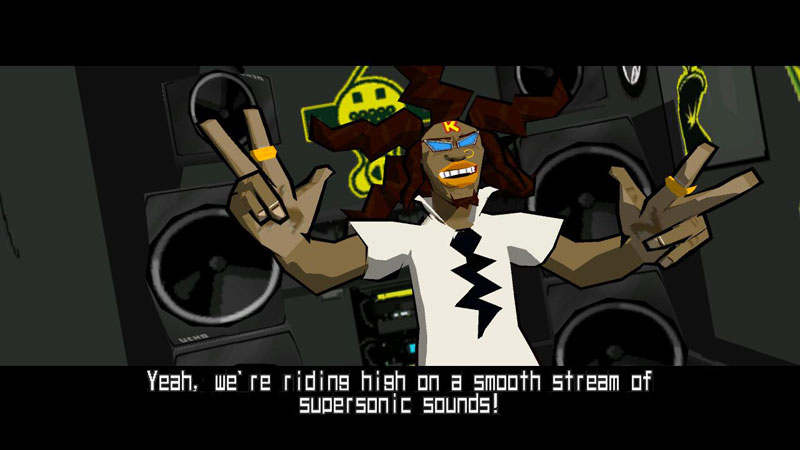 Overly cartoonish caricatures such as DJ Professor K from Jet Set Radio or unrealistic looking weaves have been replaced by realistic portrayals of black hair with characters like Nadine Ross from Uncharted: Lost Legacy or the as yet unnamed female resistance member in the upcoming Wolfenstein 2.

It’s clear that developers have either found solutions or stopped ignoring the problem and the result is afro-caribbean hair that finally looks and reacts as it would, even down to small details.

That said, there’s still a long way to go as the controversy earlier this year surrounding the new ARMS character, Twintelle has shown. It’s no surprise there are fewer examples of black or brown skinned characters in gaming when the majority of developers are white men.

The same can be said of all mainstream entertainment, film, TV and games. That doesn’t mean they should stop creating diverse characters but maybe, oh I don’t know…learn to consider how these characters might be perceived by someone who isn’t a white male. 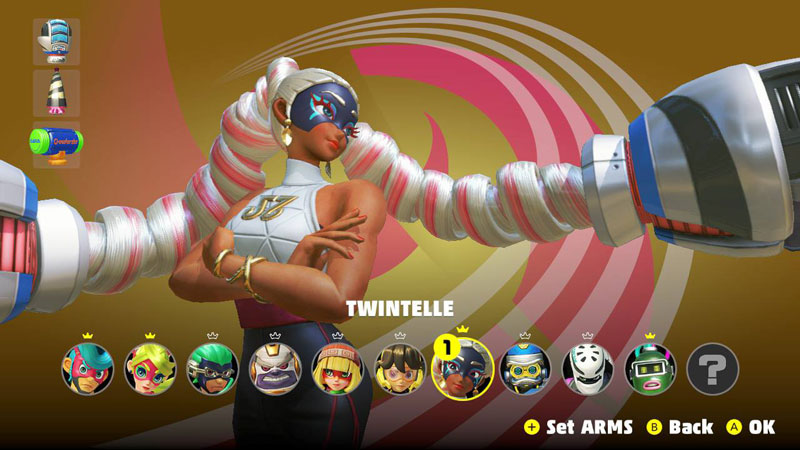 I’m pleased we’re leaving the realm of brown messy hairdos and stubble for better things. While it’s not the most important feature of a game, hair that reacts correctly to its surroundings adds an extra level of detail.

I’d love to see a character with hair that gets frizzy in humid weather or doesn’t maintain volume when wet (I blame Disney for that, I don’t care if she’s a mermaid, Ariel’s coiffure defies all logic). I’d especially like it if games with customisable hair could stop making us all look like we’ve been drawn on by a toddler with a crayon. 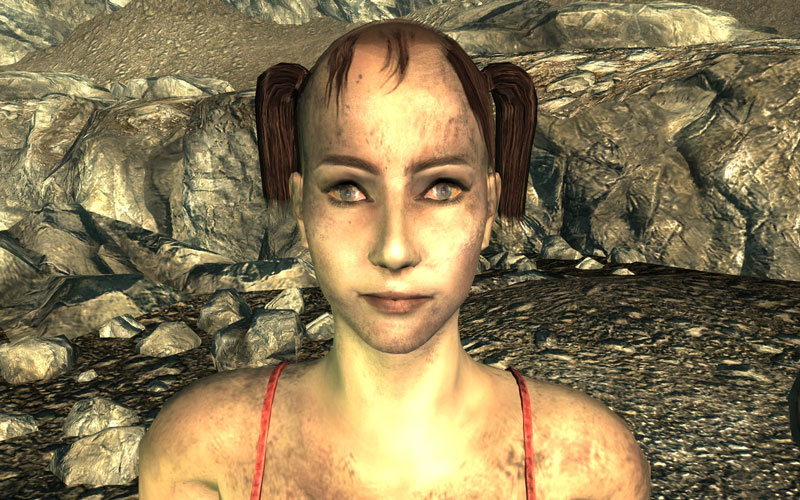 What are your favourite examples of the best and worst video game hair styles? Let us know in the comment section below…because you’re worth it.