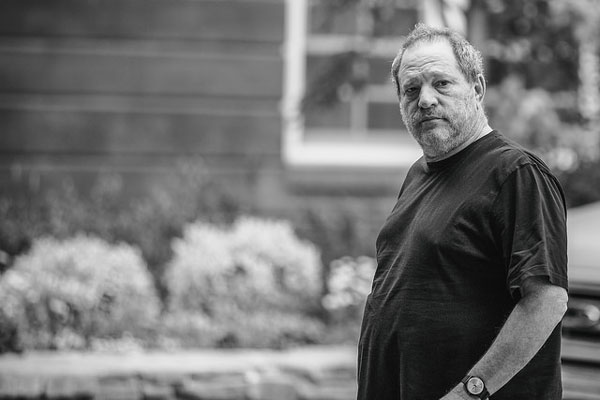 Anyone in or around the modern entertainment business realizes fairly quickly that:

1) to get anywhere, you have to “pay your dues.”
2) everyone has a Harvey Weinstein story.

Not counting my teenage years as a projectionist, my first gig in “the biz” was interning at Miramax in 1992. I couldn’t have been there at a better time. These were the pre-Disney, early-Dimension days for the indie studio run by the Weinstein brothers. Madonna: Truth or Dare was their largest grossing film to date, and arguably one of their most mainstream. In the hopper were The Crying Game, Strictly Ballroom and a violent little film known as Reservoir Dogs which would have a profound impact on the company’s, let alone the industry’s, future.

But permit me to back up a bit from the bragging rights.

How I ended up with the New York based-internship, is a scene right out of Hollywood. Waitlisted for a key animation course at NYU, I found myself looking for a way to earn transfer credits towards my undergrad degree back in Michigan.

From the projection booth that early summer of ‘92, I called the summer dean of the Tisch School of the Arts explaining my situation. He suggested I come over to his office and look through his contacts for a possible last minute internship. When I reiterated that I was calling from out of state, he told me “here at Tisch we have what’s called the GOYA system.”

“Excuse me sir?” I asked thinking about the first name in Latino food, and not the 18th century artist.

“G-O-Y-A. Get Off Your Ass. You need to come here to New York, and find yourself the internship. I’m not going to just start making calls to help you out.”

Following that first experience with a New Yorker, I flew out in the next few days, set up my dorm room and headed over to the Tisch offices to peruse their industry contacts.

Typically, a student searches for their internship anywhere from 6 to 9 months in advance. I needed to start right away. So, understandably, the first few studios I contacted had nothing available. Miramax, however, asked if I could meet right away. They were under the impression I was responding to a bulletin board posting from the morning. I went along with that story.

The opportunity that existed right at that moment was so unlikely, it felt illicit to be in their office within an hour of my call. I got along with the HR rep and she asked me to start the next day as an intern to Harvey Weinstein’s assistants (of which there there two at the time).

Day one, I was told to be around for general administrative tasks. Harvey’s Rolodex needed to be input into a fancy new electronic database. Inter-office envelopes needed distribution. Scripts needed reading and summarizing. I was a kid in a candy store, delivering packages to “Bob” De Niro’s Tribeca apartment one moment, and preparing trailer distribution reports for internal distribution the next.

I did it all with gusto, and I quickly fell in love with what they did as a studio and how they did it. I liaised with every department of their cooler-than-cool 375 Greenwich Street location, and had an unprecedented amount of access to VHS screeners. Above all, I promised the assistants to follow their one strict rule—when Harvey was in the office, I was to disappear from sight.

I had heard stories about Harvey, mostly from industry trades like Variety or my subscription to Premiere which I exalted from front to back cover. I soon got the real scoop from within the office. How his personal fridge must always be filled with cans of Diet Coke. How his assistants were constantly on call, especially when he was absent (which was often) from the New York office. How he once lined up random employees in the hallway and asked “who the hell are you and what the fuck do you do for me” to each and every one of them like a drill sergeant.

Brother Bob Weinstein, by comparison, was always in the office, and a pretty cool guy. I was fascinated by his influx of Clive Barker books, and his drive to focus on genre films. I figured the story behind the stories was that the brothers played good-cop/bad-cop—a methodology behind their success in the business. 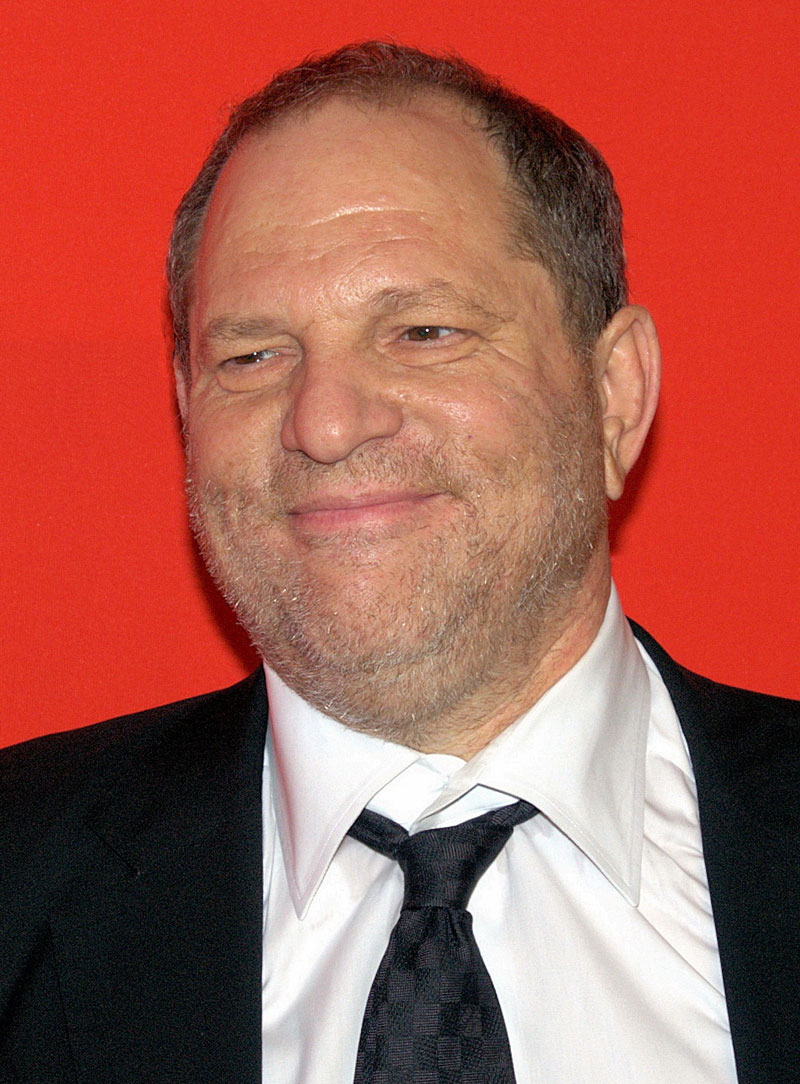 Then, about three weeks into my internship, it happened. Harvey was coming in for the morning, then flying out in the early afternoon. I was told to just grab a pile of scripts and sit in a cubicle until further notice.

“You haven’t met Harvey at all yet, have you?” asked Bob’s laid-back assistant. “The first time I met Harvey he turned me into a crying mess. Just stay out of his way.”

2pm rolled by and I hadn’t heard from the assistants, so I figured I was in the clear to swing back and see if there’s was anything I could help them with. As I approached their desk, I could see a look of terror in their eyes, which I quickly panned left to Harvey himself walking out of his office and directly into me.

Harvey was actually kind of intimidating in stature, but, like a complete idiot, I extended my hand and exclaimed, “Hi, I’m Todd, your new intern.”

There was silence for what seemed to be forever, then Harvey raised his hand, extended his finger and shouted in a deep, long bellow “LEAVE!”

Honestly, the whole thing was so surreal, I was polite about it and went back to the cubicle until fifteen minutes later where I was reunited with a quivering, broken assistant. She explained to me that they, the assistants, had brought me in to intern without Harvey’s knowledge, for whatever reason, and he was furious. Both of them were going to lose their jobs, and I could no longer intern with the company. Thankfully, the HR department was good enough to place me within another department, albeit a few blocks away at their Hudson Street location. I even returned the following year to intern with the company again.

I never interacted with Harvey again while at the company, although I did see him at premieres and press events. I didn’t return back to the studio after graduation, but I remained in the industry and met countless folks, all with Harvey stories of their own. I never had any direct evidence of the “casting couch” tales. 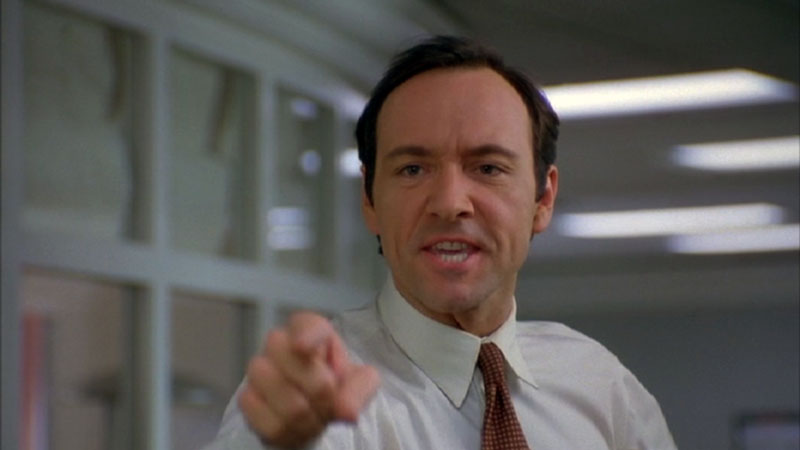 In the film Swimming with Sharks, released a year after my graduation from film school, Kevin Spacey’s Hollywood tyrant Buddy Ackerman treats his new assistant with utter disdain. He explains to the new hire “You have no brain. What you think means nothing. What you feel means nothing. You are here to protect my interests and to serve my needs.”

The assistant, played by Frank Whaley, takes the hierarchical insults to the point where it’s normal, and Buddy, exerting power through fear, has the assistant wrapped around his middle finger.

The film gets darker from there, of course, serving as a slick satire of the industry’s normalization of bullying culture. If Harvey wasn’t the inspiration for Buddy Ackerman, there are plenty of other insecure angry white male models from the sordid past of Tinseltown. Jack Warner, Joel Silver, Scott Rudin, Peter Guber, Ari Emanuel, and hell, even Uncle Walt Disney himself were known to express their insecurities in the form of aggressive exploits.

Show business wasn’t built on niceties. I learned that lesson early on.

The ugly truths finally being exposed about Harvey Weinstein involve the elevation of criminal sexual advances and rape, not the years of his bullying aggressiveness towards the people that helped make his company a success. The very serious (and increasing number of) assault accusations are important, but what about that blatant tyrannical verbal abuse Harvey built his brand on?

This normalization of oppressive behavior from the C-suite towards employees permeates all industries. A blind eye is turned by board members, human resources, and shareholders. Ironically, they’re the ones most likely starting the legendary stories behind the bravado.

According to Aaron James, the professor at University of California, Irvine who wrote Assholes: A Theory, you’ll never change the asshole in the office. In that book, he argues “assholeness” is less inattention than a permanent state of mind.

In the past couple weeks, the one thing I keep thinking about is how many people claimed Harvey Weinstein had “mellowed out” in recent years, or wasn’t the person he was in the early days. Of course, that was never true. We now know his principles extended his actions since the late 80s.

Why it took an extreme criminal act to justify sociopathic behavior escapes me. I get that it was complicated to catch Harvey in his indiscretions, but nobody seems surprised.

Those entertainment industry tales of terror are no longer cute, they’re an impediment. Asshole intentions won’t go away in the workplace until we establish a zero-tolerance environment for the abuse of power.

Though Harvey was the first asshole I encountered in my career, he was hardly the last. His attempt at belittling me had zero to little effect, and nowhere near the emotional scaring other victims have had to live with. It doesn’t make it any less worth our attention.