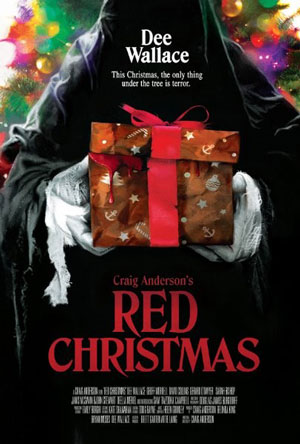 As a large family gathers on Christmas for their last holiday together in the family’s secluded home tensions run high as some family members don not wish for the home to be sold.

With the bickering put aside the family settles in to open gifts but are interrupted by the arrival of an unusual stranger who is seeking “mother”.

The stranger’s presence causes a great deal of stress amongst the family as he brings buried secrets and suspicions to the surface before being expelled from the house only to return and pick the family members off one by one.

Red Christmas is an interesting entry into the slasher sub genre that uses some of the genre’s cliché’s and tropes to tell a story imbued with heavy political themes concerning the debate around the pro–choice and pro-life movements. First time feature film maker Craig Anderson has assembled a very strong cast who all perform their roles well but I feel that the script may have failed them at times.

While the film overall is intriguing and entertaining I feel that Red Christmas ultimately doesn’t work as well as it should due to it’s lack of a cohesive tone. While the subject matter is very heavy and the characters are “playing it straight” for the most part, the overall mood of the film is constantly interrupted with goofy over the top kills that are not frightening and deflate all of the films tension.

Imagine a film made by two crews, the crew handling the bulk of the filming are trying to make a serious and tense slasher film while crew two are filming all of the death scenes as if they were intended for a Troma film.  Blu-ray extras include commentary, interviews and bloopers.

Red Christmas offers some fresh ideas and story elements and worth a watch.