Scott Dunbier’s Artist’s Editions from IDW are pretty much review proof. If you’re a comic book fan and you like a certain artist’s work, it’s a given that you will like an Artists’s Edition photographed in high definition wholly or mostly from the original art with stamps, blue pencil, white paint, marginal notes, editorial comments, etc. It’s the closest most of us will ever get to holding original art from some of the masters of the field in our hands.

And it follows that if you’re a Silver Age/Bronze Age comic book fan, you’re a Jack Kirby fan, because other than a handful of contrarians who stubbornly refuse to concede it, at his peak, Jack Kirby WAS comics.

And it’s at various peaks where you’ll find the King of Comics in the four books I’m writing about today: 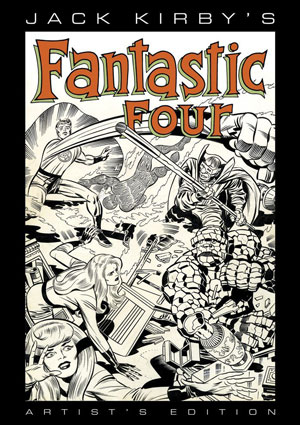 The first of these books, featuring the FF, is quite literally my childhood.

Early on, Fantastic Four became my favorite comic book and eventually I amassed a complete collection (which I later had to sell, I’m sorry to say).

And how he made everything crackle with energy just by seemingly dipping the eraser end of his pencil in black ink and stamping it all over the page!

This volume offers a few complete issues and a whole big bunch of key pages, pin-ups, and posters, as well as a long run of original art covers, starting, appropriately enough, with the first ever issue of FF I ever saw back in the mid-1960s, # 53!

The large format easily allows for one to spot the subtle differences here between the inks of Sinnott, Giacoia, Ayers, and Chic Stone. There are even pages from the issue where Wallace Wood inked Daredevil and my favorite to pore over, the one where Steve Ditko inked Kirby!

Along with Daredevil, as mentioned above, and the Sub-Mariner—two characters Jack Kirby did NOT create–this volume is filled with some of Jack’s most famous sixties characters—the Black Panther, Medusa and the Inhumans, Dr. Doom, the Silver Surfer, Sandman, Klaw, the Watcher, Dragon Man, Wyatt Wingfoot, and the Puppet Master. Even the original X-Men pop up briefly.

The FF volume ends before the period where Jack was becoming disenchanted with Marvel. That was what ultimately led to his move to DC where he took over Jimmy Olsen and immediately unleashed his high concept Fourth World/New Gods saga. 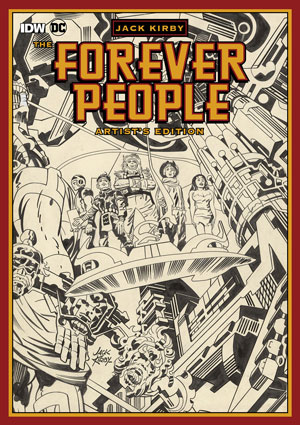 The first book in that series was Forever People.

Forever People # 1 was another personal milestone for me as it was the comic book that convinced me, at age 11, to continue collecting comics even though I had discovered girls. I actually gave up comics for a couple of weeks but one of the last books I had bought was Forever People’s first issue.

When I finally got around to reading it, it was back to the candy store to catch up on all I’d missed during that two weeks off! Girls would just have to wait.

Kirby was on the march again!

Inker Vince Colletta’s reputation has suffered in recent decades but I’ve always appreciated the softness he brought to Kirby’s often rough-edged imagery without destroying the power therein. (Well, when he wasn’t erasing things in the background but that’s another story.)

Interestingly, this was the period where DC was having Superman and all associated characters retouched or pasted over by Al Plastino or Murphy Anderson in order to keep the house look uniform. On these pages, it looks like a lot more than a pasteover. It looks like Plastino may have been handed the pages to fully ink Superman and Jimmy Olsen either before or after Vinnie did the rest of the story.

Colletta, who had inked Jack Kirby’s Thor for years at Marvel, was insisted on by DC management but, at the earliest opportunity, Jack switched to his hand-picked inker of choice, Mike Royer. Both Colletta and Royer are represented in this volume.

Kirby’s Forever People hasn’t aged as well as his other titles from the period, probably because it was essentially about a group of space hippies. Darkseid and his sadistic sidekick, Desaad made their earliest appearances in this title and, as with all the Fourth World series, were the overarching antagonists. 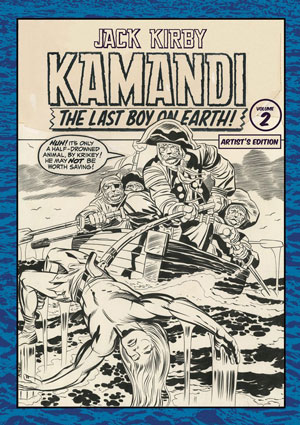 Kamandi, the Last Boy On Earth, stars in the next volume.

This was perhaps Kirby’s best and most popular series during his time at DC in the 1970s. It was certainly the longest running, continuing on a bit even after Jack’s departure back to Marvel!

With Royer at his best channeling the King’s intent here through his inking, these stories, covers, and pages showcasing Jack’s long-haired, half naked,post-apocalyptic teen boy and his adventures with Planet of the Apes-style animal/human hybrids were and are an imaginative hoot!

I’m personally not the biggest fan of Mike Royer’s inks over Jack but I have to remember that Jack himself WAS and that obviously counts for a lot. Nothing against Mike personally, mind you. I’ve met Mike and I think he’s fun and cool!

He even writes a very informative introduction to our next volume, The Pencil and Inks Artisan Edition.

We’re still at DC here, but now alternating pages from Kamandi and Jack’s other big post-Fourth World title, The Demon.

One thing in particular that jumps out at me here in comparing penciled pages and inked pages, is the importance of the lettering, which was also done by Royer. As the full writer by this time, Kirby would always pencil in dialogue, sound effects, titles, and captions, but it was up to Royer as his trusted finisher to bring it all together.

There’s a lot more Kamandi here but, along with The Demon, you also get a full issue of OMAC, a late entry also-ran title at the time whose concepts were later incorporated more into the DCU. 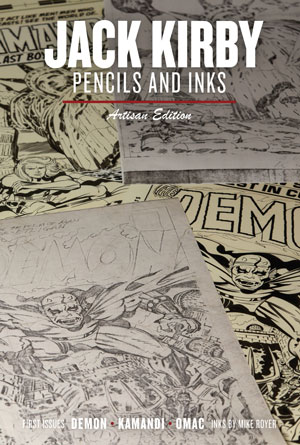 These types of books are not about the stories, they’re about the art, but keeping in mind that comic books are a unique art form in which the illustrations are part and parcel of a narrative, Scott and his researchers try and largely succeed at keeping the pages intact and sequential so you can also enjoy the stories!

As wacky as the later ones sometimes seemed at the time, hindsight has shown that Jack Kirby’s unbridled imagination was still something to be reckoned with.

My only real criticism of any of the Artist Edition books from IDW is that they should come with a warning to be careful not to drop them on your toes! I underestimated the weight of the Wally Wood EC volume a couple years back and might’ve broken my foot if I hadn’t had shoes on!

And why they even try to sell these at cons I don’t know. It’s not like you’re gonna just carry it around with you all day. But I digress.

Anyway, if you’re a Kirby fan, you already have these or have them on a wish list. If not, you should. If you have ever once held an original Kirby page of art in your hands, you undoubtedly felt the magic emanating from it. That magic emanates from these pages—even in my PDF review copies!—almost as much as from the real thing.

I think Scott has crafted more than 50 of these things now! Steranko! Eisner! Wood! Crandall! Just mortgage your house and give IDW all your money. If you’re a comics fan of the right age, it’ll be worth it.