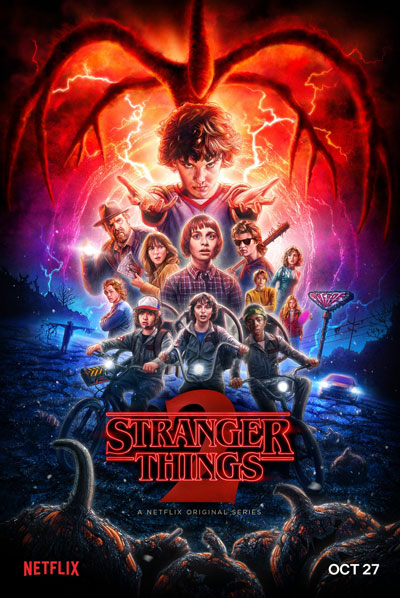 If you’re a fan of 1980s movies, books, TV shows, and comics, odds are good that around this time last year you were bingeing on the Netflix original, Stranger Things, a flat-out love letter to the pop culture of that increasingly long-ago decade.

Well, wasting no time in waiting for the kids who starred in that mega-hit series to grow up, the producers quickly went back to the ‘80s well and have now delivered yet another fun follow-up mini-series.

Stranger Things 2, while it has some rather big and obvious ties to the first Stranger Things, is its own beast…quite literally, in fact. It’s much more episodic and less a straight on narrative than its predecessor, although it once again features the young boy, Will (Noah Schnapp), as the focal point of, well… something!

For much of its rarely dull eight hour plus running time, ST2 is more a character piece, centering on our old friends from last year, Will, Mike, Lucas, and Dustin, the four geeky, D&D-playing middle school boys, and their super-powered friend, Eleven. Only this time, they get separate and very different story arcs that only coalesce as we near the ending.

Eleven, who disappeared at the end of the original, has been hiding in plain sight for the past year and now sets off on a journey of discovery that leads her to find long-forgotten people from her past.

Her place in the nerd group is taken—although never officially (as we’re repeatedly told) —by ginger video game champ Mad Max (Sadie Sink), a somewhat mysterious new girl in town who wows Dustin and Lucas, much to the dislike of her hot bad boy/bully stepbrother.

No real spoilers other than the basic plot here: Will gets possessed by a creature he sees in weird visions, and said creature manifests in various forms at the giant corporate lab still on the edge of town from last time. Once again, his pals and his never-say-die mother (still enthusiastically played by Winona Ryder), realize that saving Will is the key to saving everything and everybody!

While all this is going on, Nancy and Jonathan are also going through their own, only peripherally related, story arc, which, as likable as the actors are, seems a case of catering a bit too much to the fans’ wishes.

The real surprise is Nancy’s doofus boyfriend, Steve (Joe Keery), who gets much more screen time and character development here than before, and is teamed unexpectedly with different characters, as well.

David Harbour, too, returning as the tough guy Police Chief with a heart of gold, gets to straddle the two main story arcs throughout and is thus given a chance to create a much more rounded character than is usually seen in shows of this type. He succeeds admirably.

New characters played by Sean Astin and a (to me) almost unrecognizable Paul Reiser both prove in the long run to be something other than the clichéd characters they’re set up to look like.

All of the young actors are first class pros already—Finn Wolfhard, Gaten Matterazzo, and Caleb McLaughlin are all actors to watch in the future. As before, though, the clear takeaway here is Millie Bobby Brown as Eleven, the child who was raised in the town lab to be something more than “normal,” and now resents the hell out of it. Young Ms. Brown still shimmers with an old-school intensity even when she’s not saying a word but this time she gets a chance to show some different emotions as well. While the script sets Eleven up to dominate her scenes, it’s Millie’s deep and charismatic creation that makes the character loom large over the entire production, even when she isn’t onscreen!

With the exception of one prolonged and strange side trip that is more or less abandoned (until next time, presumably) all of the various actors and storylines come together neatly at the end for a satisfying if completely unsurprising climax, followed by the almost mandatory twist at the actual end.

A good story, an excellent cast, and some great performances are all well and good but this wouldn’t be Stranger Things if not for its 1980s nostalgia, in-jokes, ties, and references, and there are, as one might suspect, plenty!

The basic story set-up is, of course, from Steven Spielberg’s now much beloved also-ran, The Goonies (1985), and/or Stephen King’s novel, It (1986)! Heck, Sean Astin was actually IN The Goonies! There are ‘80s songs, movie, TV, real-world, and especially video game references, all of which the average viewer will likely gloss over and yet they set that inimitable sense of style that attracted so much attention to the first series.

Is this one better than the first series? I don’t think so. They’re both violent, funny, and genuinely scary and at times both even manage to grab you by “the feels.” They both have that purposely crafted “classic” atmosphere, and yet both have the unmistakable look of modern day television as well. The first Stranger Things, however, had the distinct advantage of being unexpected. Here, even if we don’t know specifics, we know what’s coming, and that inevitably dulls the show’s overall effect.

It says a lot, though, that there’s nary a dull moment and rarely a misstep to be found. The new series is peopled with characters you quickly really care for, and they’re all played by actors you find yourself really enjoying watching. Seems to me like a perfect way to spend an Autumn weekend. Stranger Things 2 is just plain good TV.

Bring on Stranger Things 3 before these kids all hit growth spurts!