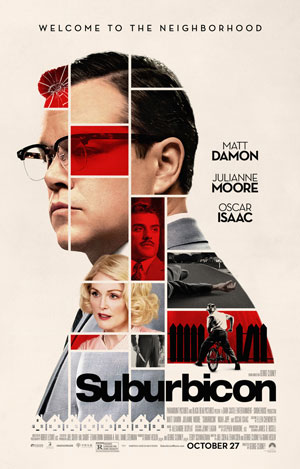 Stop me if you’ve heard this one before, but apparently there’s more to suburbia than meets the eye (and it’s not always the wholesome Norman Rockwell painting it’s cracked up to be)!

That’s right, folks:  in his sixth feature behind the lens as director, George Clooney bravely digs beneath the surface of manicured suburban perfection to reveal the seething racism and venality at the heart of the American dream…

…and if the preceding sentence happens to conflict with your rightward political leanings, then it’s probably safe to say Suburbicon‘s not the movie for you.

But liberals will likely find themselves rankled as well by the Cloon’s depiction of the targets of racism in this ’50s pre-fab fantasia:  a solitary black family bravely enduring the bigotry of a Klan-robe-white community who register more as symbols of “Civil Rights” than fully developed flesh and blood human beings in their own right.  Not only that, but in a particularly tone-deaf directorial decision, the African American man of the house (Leith Burke) is literally given no voice or personal history in his scant time onscreen.  He’s basically just there to weather oppression and wearily pull down a Confederate flag left by vandals on his property.

Yet what’s truly inexplicable about Clooney’s off-key agitprop is the fact that none of it ultimately has any bearing on Suburbicon‘s central suspense plot about nefarious Caucasians scheming to swindle and murder each other.  Indeed, the script, which plays like a tribute to the tropes of the Coen Brothers oeuvre (screaming fat men, off-kilter dialogue, comical spasms of murder and mayhem, etc.) was actually written by Joel and Ethan Coen with an assist from Clooney and his frequent collaborator, Grant Heslov — and let’s just say it’s pretty easy to guess who contributed the heavy-handed integration subplot (loosely based on the 1957 documentary Crisis in Levittown) and who concocted the central caper about a William H. Macy-esque weasel (Matt Damon in character actor mode, clearly enjoying the break from his square-jaw leading man day job) way out of his depth in the midst of a criminal caper gone badly awry.

To say more about the plot’s twisty schemes and double crosses would be to spoil the fun of this flawed yet highly watchable B-movie, which capably delivers a decent series of fast-paced set pieces and enjoyable turns from a top-notch cast (including Julianne Moore and a scene-stealing Oscar Isaac) basically playing live-action cartoons in a kitschy faux-noir theme park.

Only Noah Jupe (as the soulful, moon-eyed son of Damon’s shady corporate swindler) comes across as a fully-dimensional human being, grounding the story with a crucial dose of relatable humanity as he struggles to survive all the madness swirling around him in a heartfelt performance suggesting what a better, more focused version of Suburbicon might have been.