Can I dare say I’m a little bit excited about this Justice League movie? It’s coming out on my birthday weekend, so that’s good, right?

Sure, it still looks too dark and overwrought. Yes, the jokes in the promos are fine, even though many of them have the defensive air of “We do humor now, SEE?!?”

Ben Affleck looks zaftig and uninterested in playing Batman. The talk of Superman as a global inspiration doesn’t match up to what we got of him in Man of Steel and Batman v Superman. Will he enjoy performing superheroics this time?

I’ll even grant you that Flash’s suit looks too extra with all the plates and cords.

Or that Cyborg’s body looks too complicated and the CGI unconvincing. Also, why make an entirely CG body for Cyborg, when Ray Fisher looks like this?!? 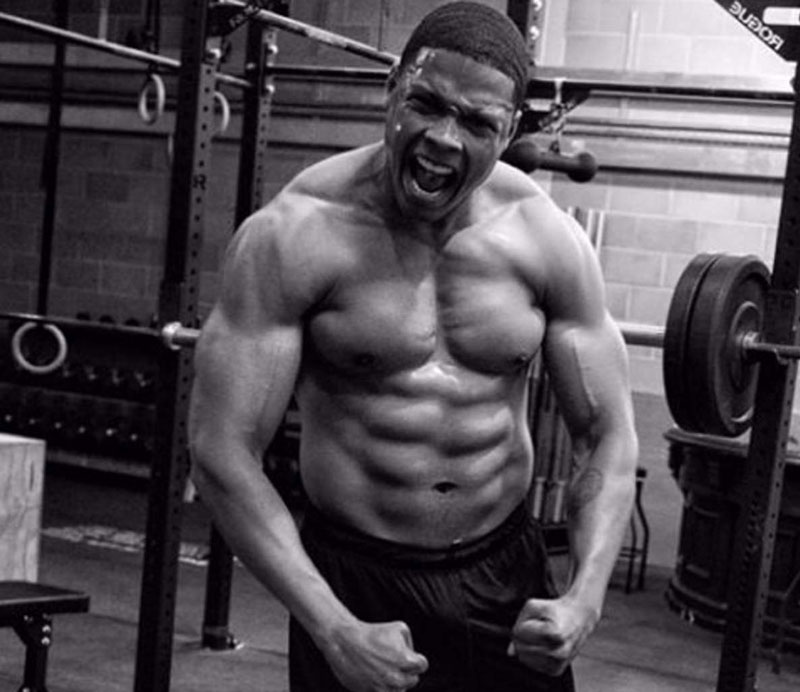 Wonder Woman continues to look great, of course. This retooled Aquaman looks like a riot, and I’m actually psyched to watch Parademons and Steppenwolf on the big screen regardless.

So at least I’m gonna get some dope action figures out of this, yes?

But I was filled with a great disappointment when I spied Cyborg on the shelf at a big box store. This version, packaged with Mother Boxes, had Cyborg’s head encased in armor like we saw in an early trailer. You know, Iron Man-style. 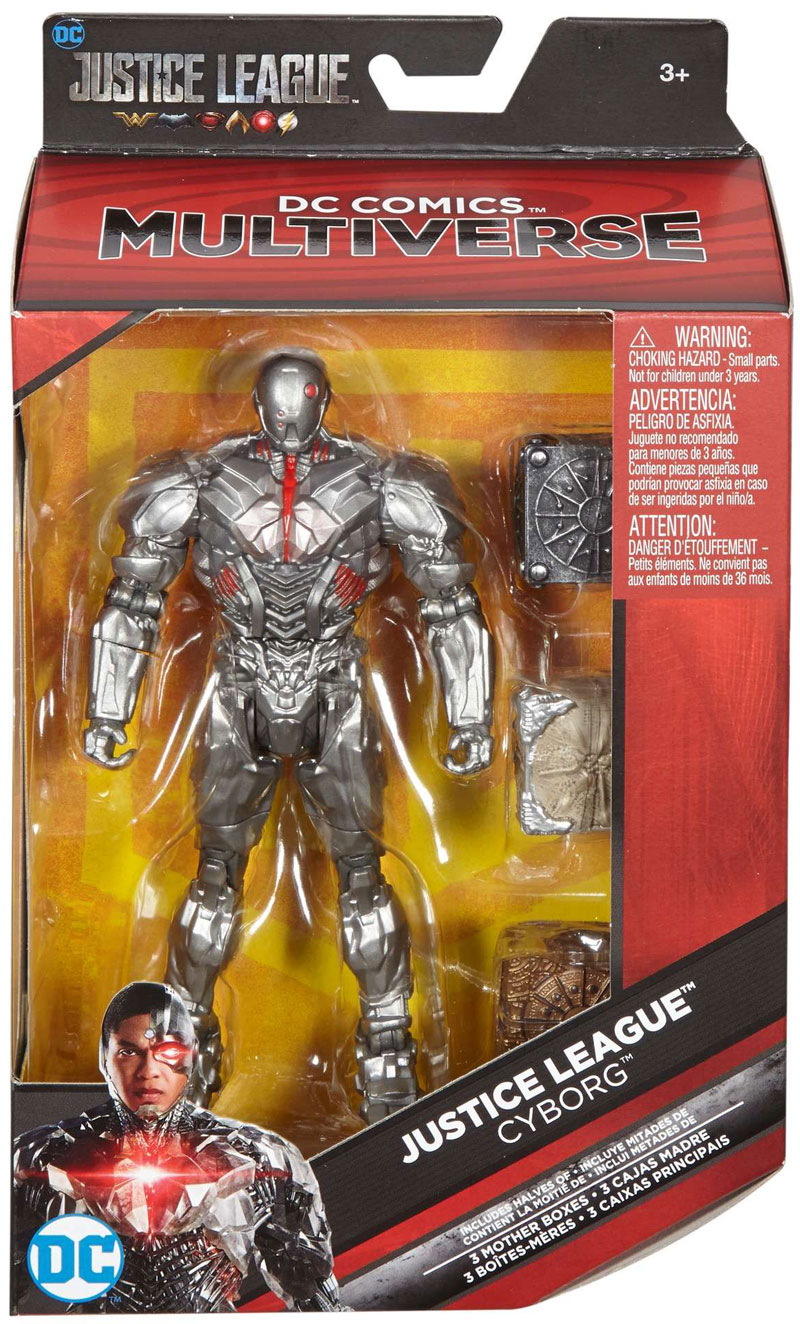 There was no alternate head. The armor doesn’t fold back, or anything.

Why aren’t they showing Cyborg’s face?

Oh no, I thought. Bump that!

See, this holds special significance for me and many other black nerds out there. Because blerds are the only folks I know who make a habit of collecting action figures of black characters.

Our genres of choice often have little or no black characters to begin with, which affects how popular characters become. White boys gain the most consideration in the market for these toys, and toymakers presume those boys won’t choose a figure of a person of color, or of a woman of any color.

Then those black characters’ figures are not produced on an equal scale. You also see this with figures of female characters. So for every one Storm figure, there are 17 Wolverine ones. In the case of The Force Awakens, it was difficult to find a Rey, and she was the front-and-center hero. And I saw 10 Kylo Rens for every Finn. Several figures in the Marvel Legends line based on the Netflix shows are out now, and there’s no Luke Cage (yet). 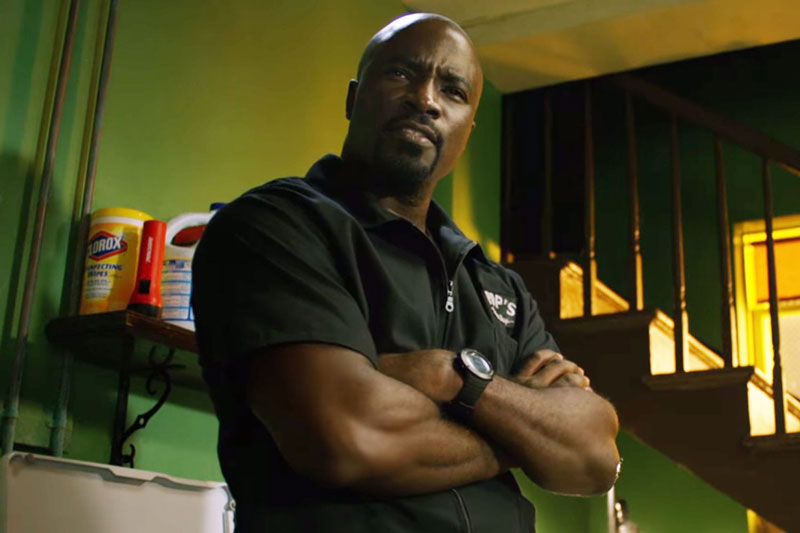 For Captain America: Civil War, I never saw Black Panther in the store, that’s how rare that figure was packed. So what the hell is Disney going to do for the Black Panther movie? How prominent will those toys be? I hope they do more than Mattel did for Wonder Woman, which was this past summer’s only blockbuster hit. (Though the 12-inch dolls were dope. The Amazons had horses. Horses!)

So, with Justice League coming out, I have been looking forward to adding a Cyborg to my collection of black action figures. He could hang with Misty Knight, who has a cybernetic arm. They’d make a good team. They can meet Earth-23 Superman and Patty from the new Ghostbusters at the clubhouse. Mace Windu is cutting the cake with his purple lightsaber, ‘cause that magical dude be showin’ off allatime.

But Cyborg can’t eat the cake with that armor covering his entire head, one red eye glowing. This ain’t a Lady Gaga concert, bro.

OK, enough jokes: What’s the point of having an action figure of a black character, one who shows his face as part of the design, if I can’t see his face? Is he black at all then when his face is covered? 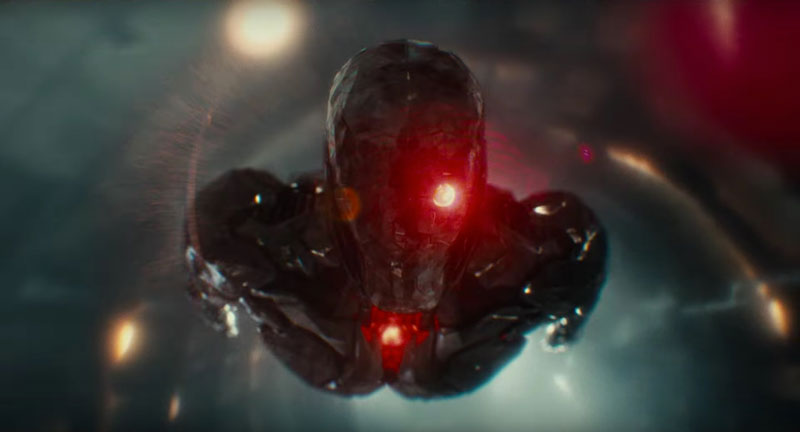 Sometimes it’s facial, such as Shadowhawk, Night Thrasher. Steel is encased in metal head to toe. To its credit, Astro City had face-covered Jack-in-the-Box but also had Cleopatra and Black Badge (though they weren’t as prominent as Jack).

Many times, black characters lose their bodies or control of them: Cloak literally doesn’t have a body anymore under his namesake garment. Deathlok is a reanimated corpse, his face necrotic.

Generally speaking, Victor Stone’s head and upper torso are all that remain of his body after an explosion, when he is integrated with the tech that made him Cyborg. Furthermore, there have been many storylines in which Cyborg has taken on new bodies, both mechanical and organic. He doesn’t have a body, but the body he makes can be replaced. 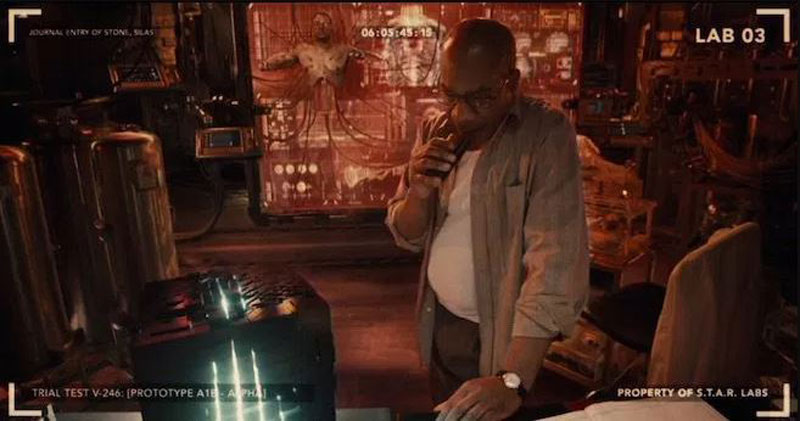 This inevitably has brought up, time and time again, how Cyborg is emasculated, because fanboys can’t help but ask, “How does he have sex?” (Thanks, dummies.) But add this to how the character never has a love interest, and it falls into the pattern of avoiding the sexuality of black people. That avoidance or dismissal exists in relation to fears/anxieties surrounding the dehumanized, animalistic, oversexuality of black people.

Geordi La Forge never had a romance plot on Star Trek: The Next Generation, for example. Picard? Yes. Riker? Plenty. Deanna Troi? Half her character was built on such. Even Data got some love stories.

It was telling that David Walker, a black comics writer, gave the New 52-era Cyborg his body back by creating a nanite-type ability that appears to regenerate flesh. 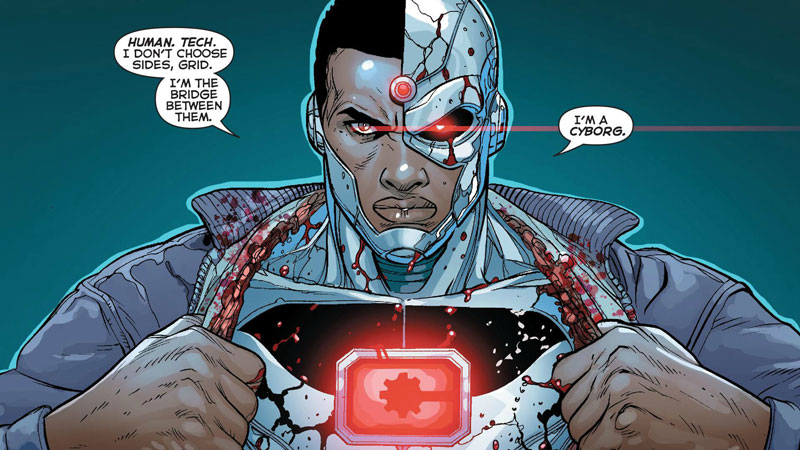 All of these things came back to me when I saw that fully dehumanized Cyborg, his face gone. It didn’t matter that this is going to be in the movie, at least for a moment. I just saw a black character reduced to a bunch of metal parts, sitting on a Walmart shelf. They really couldn’t have just added a second head?

Lucky for me, at least I could then scan Amazon and find another line of Justice League figures that would show Cyborg’s face. At my neighborhood comic book shop, this entire, separate line had come in. Making a giant Steppenwolf as the build-a-fig was standard, but they did give Superman and Batman old-school fabric capes.

As for Cyborg, I still don’t dig the Michael Bay Transformers body.

But he’s still a looker. 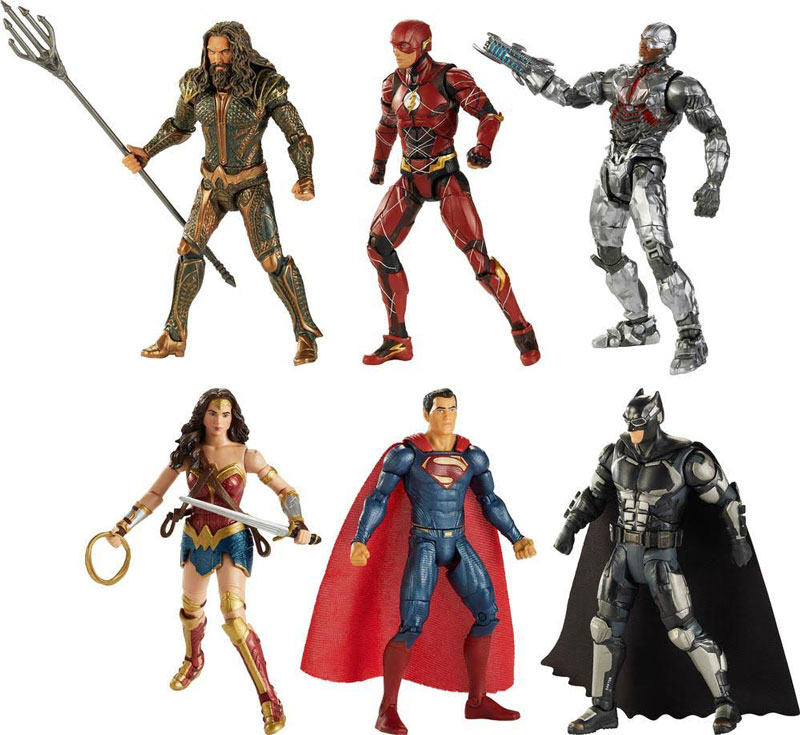