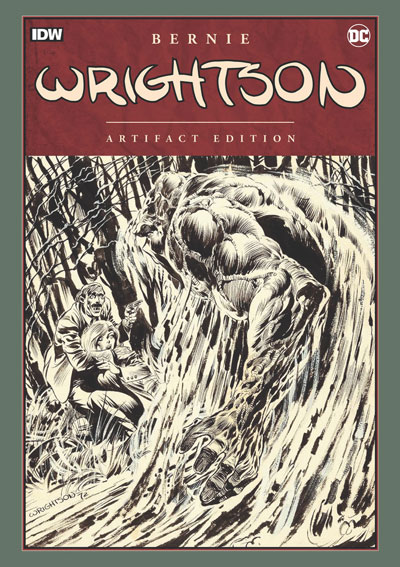 IDW’s Scott Dunbier has a life.

I know he does. I see pictures from it on Facebook!

That said, I certainly don’t know when he has TIME to have a life because it seems like every Wednesday there’s at least one new Artist or Artifact edition that Scott’s cobbled together!

This week it’s the Bernie Wrightson Artifact Edition and even though all of these handsome volumes are impressive, one could certainly make the case that this one is even more impressive than normal.

I vividly remember the first time I ever saw Berni (no “e” there at the time) Wrightson’s art.

It was DC’s Nightmaster, from a 1969 Showcase issue. The character had a three-issue story arc.

In spite of the fact that all three issues had great Joe Kubert covers, the first had art by old timer Jerry Grandenetti—not a favorite of mine at the time.

So I skipped the next two issues, only finally picking them up used a year or so later. And wow!

My nerd buddy and I were both blown away by the difference in the artwork from that first issue!

In fact, this guy Wrightson was different from any artist we had ever seen before in comics!

I next noticed his work on the low-key horror cover of the great 100-page Super Spectacular Weird Mystery Tales one-shot in 1971. If I recall correctly, a cartoon version of Wrightson himself hosts the anthology of mostly 1950s stories.

Then we discovered the already canceled Web of Horror. We started seeing his work at Warren and in DC’s mystery titles. Then there were fanzines, portfolios, and then came Swamp Thing.

After that, Berni Wrightson was the comic book equivalent of a rock star. Joining together with Jeff (later Catherine) Jones and Mike Kaluta (both of whom are credited with assists on Nightmaster) and Barry Windsor-Smith, late of Marvel’s Conan, they formed The Studio.

Kaluta is here in the new book, paying tribute to his old friend and colleague in a poetic but somewhat rambling (Sorry, Mike) three-page introduction. I find it hard to believe anyone who would pick up this book would need an introduction to Bernie Wrightson, anyway. So, me? I just hurried on through to the artwork and stared for hours at the high-quality scans and the artist’s amazing use of black ink, negative space, cross-hatching, and nightmare imagery that made him a favorite of THE great horror author of our time, Stephen King.

Books like this aren’t for the casual fan. They aren’t for the reading but for the art. As always, though, Scott manages to piece together as many complete or near complete stories as possible, mostly here Swamp Thing ones. Swamp Thing #7 is present in part, with added pencil roughs even! That was the issue featuring Wrightson’s first take on Batman!

I think my favorite art here is the ad for DC’s then-upcoming Shadow comic by Wrightson, the master of the Shadows! Mike Kaluta ended up doing the series (collaborating with Bernie on one issue) and it was extremely memorable but oh the promise this ad shows!

And the promise Bernie showed in ALL the art here, in fact! It’s hard to believe but nearly everything in this Artifact Edition is from Wrightson’s first decade in the business! He was still learning! It must have been tough to be such a master of your craft already while still learning it!

I never got to meet Bernie Wrightson, although I did see him in person at a con in Philadelphia back in 1977 when I was 18 years old. When he died early this year, though, it was like finding out a distant relative had left us. At the back of the book, there’s an appreciation by artist Kelley Jones, who seems to have felt exactly the same way.

The good thing about artists, of course, is that their art survives them and the good thing about Scott Dunbier is that as the editor of the Artist and Artifact Editions he keeps doing a fantastic job of reminding us all just that. Thanks, Scott!