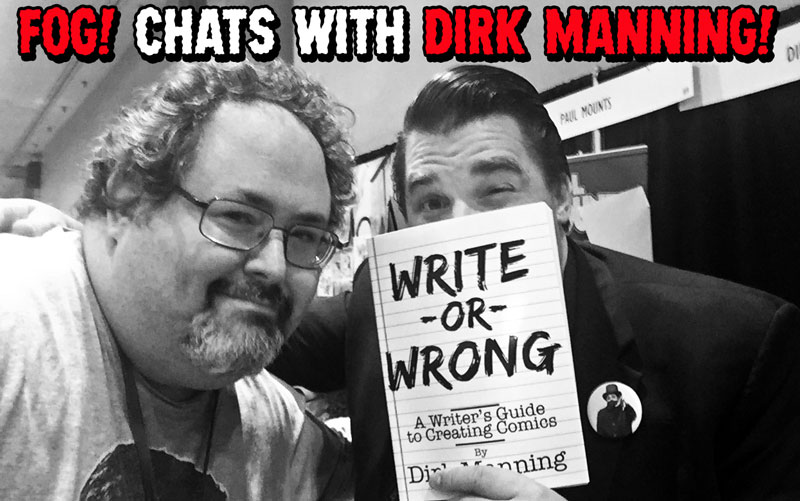 For independent comic book creators, Kickstarter has been an instrumental tool for reaching and building a readership/fan base.  And, there’s no one who does that better than writer Dirk Manning.  With his latest Kickstarter for the fourth volume of his Tales of Mr. Rhee series currently running, Dirk is not only the comic book master of the macabre, but one of the hardest working and nicest guys in the industry.

Dirk took some time to discuss his experiences with Kickstarter, the Mr. Rhee campaign and his upcoming projects.

We finally met for the first time several weeks ago at NYCC and you were just about to launch the Kickstarter for TALES OF MR. RHEE Volume 4, and while at the show we discussed how at this point when you launch a Kickstarter you’re pretty secure you’ll make the funding, and rather are curious about how far it’s going to go past that.  You’re currently over $10,000 above your goal with two weeks left.  What, if anything, have you learned from your first Kickstarter to now?

Dirk Manning: First, let me say that it was nice to finally meet you in person at New York Comic Con, sir!

That aside, yeah, this is the fifth Kickstarter I’ve run, and the fourth one I’ve been completely hands-on with, so at this point I was fairly confident that we’d hit our funding goal for TALES OF MR. RHEE Volume 4. The series – as well as all of us involved in creating this volume – has a very dedicated readership that continues to grow every year, and between that and that amazing Ben Templesmith cover, I knew we’d hit our minimum funding goal.

What I didn’t expect is that we’d hit our funding goal of $13,000 in a mere three hours and thirteen minutes – on Friday the 13th, no less! That was mind-blowing and humbling. It’s nice to know that I have such a dedicated readership who will also so enthusiastically support my work. 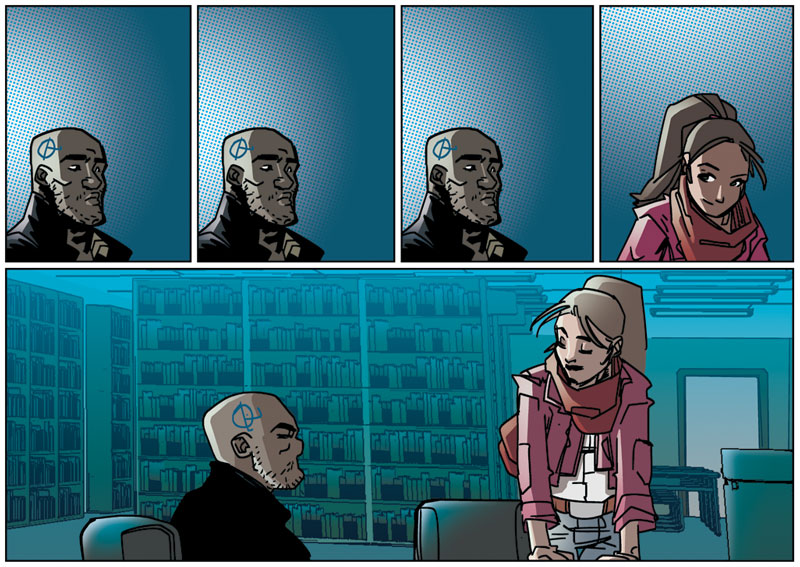 One of the things that impressed me at your booth is that you “sell” your work to the customer.  I know how hard you work at signings and shows.  So many times I’m at a show and I don’t even get eye contact from the creator behind the table, they think that simply selling a comic is enough.  Was it that kind of tenacity and approach that allowed you to transition to a full time creator?

Also, point blank, I’m exceptionally proud of the work my collaborators and I do together, and I’m well-aware that because we do creator-owned work that we are responsible for selling the work ourselves, even when we work with publishers. I’ve been writing and publishing creator-owned content for over a decade, and I’ve published with top-tier publishers such as Image Comics and small press companies no longer in business, but it doesn’t matter where your books land: You need to be willing to promote your own work if you want the most people possible to read it.

Hard work begets your only chance at long-term success.

The current Kickstarter is for the fourth volume of TALES OF MR. RHEE.  For those unfamiliar with the property, “sell” MR. RHEE to FOG! readers and tell them about the stretch goals. 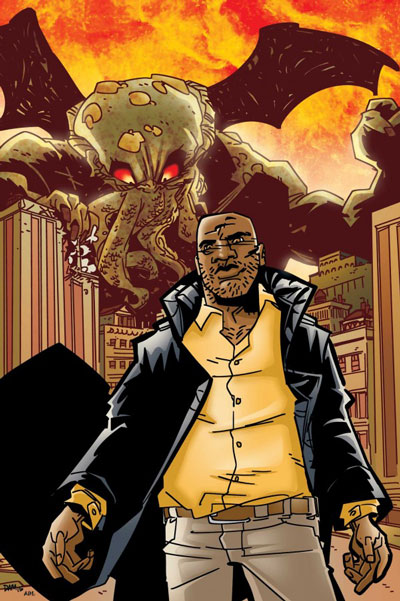 The premise of TALES OF MR. RHEE is this: Hell invades Earth for three days, and then it stops. While most people want to believe that the Three Days of Darkness are over and the monsters are gone, Mr. Rhee is a magician who knows there are still demons left behind and that the three day invasion was really just the first wave of what’s coming next.

TALES OF MR. RHEE is very much a horror book, and several people have called it “Cthulhu Noir,” which I think also fits very well, too.

In TALES OF MR. RHEE Volume 4 we find Mr. Rhee at a crossroads in his life: He’s finally willing to try to learn to trust people again just as his archnemesis from Volume 1 returns to, and I quote “burn you and everything you love.”

Now Mr. Rhee must decide who to trust as his life – and the lives of those he’s chose to align himself with – are all in very real danger from a quarter-ton rampaging fire demon.

In the campaign for TALES OF MR. RHEE Volume 4 we’re offering a *Kickstarter Exclusive* Hardcover Edition of the book – which will be an over 120 page original graphic novel – and we’re on the verge of unlocking our 10th(!) Stretch Goal as we’re talking right now.

Readers can see all the Stretch Goals we’ve unlocked by looking at the campaign at www.bitly.com/EverythingBurns, including a triple-signed and head-sketched bookplate, two Kickstarter Exclusive Bonus comic stories, and more.

You rotate TALES OF MR. RHEE with your other properties, including NIGHTMARE WORLD and LOVE STORIES (TO DIE FOR).  What sparked your love of horror and do you have any interest/plans in working in other genres?

I love horror because I think it speaks to the human condition in a way no other genre can.

Now that NIGHTMARE WORLD is finished (the NIGHTMARE WORLD OMNIBUS raised over $45,000 on Kickstarter last year) I have a lot of mental bandwidth free to start doing not only more books, but some new titles too.

TALES OF MR. RHEE will be ongoing for… a while… and I’d like to do one more volume of LOVE STORIES (TO DIE FOR), but aside from that 2018 and 2019 are going to see several new titles and franchises starting with me and several of my friends, some of whom I’ve worked with before, and some of whom I haven’t.

And several of the new books won’t be horror… at least not in the traditional sense, anyway. Heh.

I’m a huge fan of creators who have a diverse and prolific output regardless of their medium, and to that end I’d say my three biggest influences come from three different mediums of entertainment: Mike Patton (music), Harlan Ellison (prose literature), and Alan Moore (comics)

If you look at the body of work those three artists have created, you’ll see a massive amount of output that also reflects a lot of variety… and while I’m primarily known as a horror writer, I’d like to think that both now and moving forward, people will see a lot of variety in my work, too.

Obviously TALES OF MR. RHEE Volume 4 will be coming out this Spring, and before that we’ll see the NIGHTMARE WORLD OMNIBUS as well as the companion book THE NIGHTMARENOMICON, which I’m equally excited for people to see.

My hope is that I’ll have the full MARIACHI graphic novel ready to launch in February with Christopher Sanchez and John Marroquin, and then in May GreenBrier Games will be releasing the TALES OF MR. RHEE/NIGHTMARE WORLD tabletop game.

Past that there are plans for more TWIZTID: HAUNTED HIGH-ONS from Source Point Press, as well as WRITE OR WRONG Volume 2 in 2019… and a few new creator-owned titles in the meantime that I can’t quite talk about yet, despite contracts already being signed. Like I said, they won’t all be horror, though… but they’ll definitely read as Dirk Manning books. [laughs]

Oh, man… I’m so glad you asked. I feel like I’m living in a golden age of great comics, stories, and music. Musically, right now I’m really loving the new DEAD CROSS album (a new-school hardcore-esque album with Mike Patton and Dave Lombardo on drums), and I’m also loving ME AND THAT MAN, an old-school county album made by the lead singer of the Polish death metal outfit BEHEMOTH. My comic creator (and occasional collaborator) pal Dan Dougherty’s band ON THE OFF CHANCE also recently successfully Kickstarted a new Americana rock album titled “White Shoes Black Water” which is in constant rotation when I’m driving, too, as is the latest album by TWIZTID, which I suppose shouldn’t surprise anyone since I’m writing their comic book.

As far as literature goes, I’m extremely excited to start-up on the new Joe Hill book STRANGE WEATHER, as I’m a huge fan of his work and actually have signed copies of every one of his books, including this one.

And finally, regarding comics, by dude (and, again, occasional collaborator) Howie Noel recently put out an autobiographical comic about his struggles with anxiety called FLOAT which really rocked me to the core. I’m also really enjoying HILLBILLY by Eric Powell, and my friend K. Lynn Smith recently wrapped-up her fantasy/western PLUME, thus ending one of one of favorite comics in recent memory.

Like I said, I’m so fortunate to be able to enjoy such great music, books, and comics, and I can only hope that my books such as TALES OF MR. RHEE bring people as much joy as some of the work I mentioned brings me… even if it’s in a terrifying fashion, of course. [laughs] 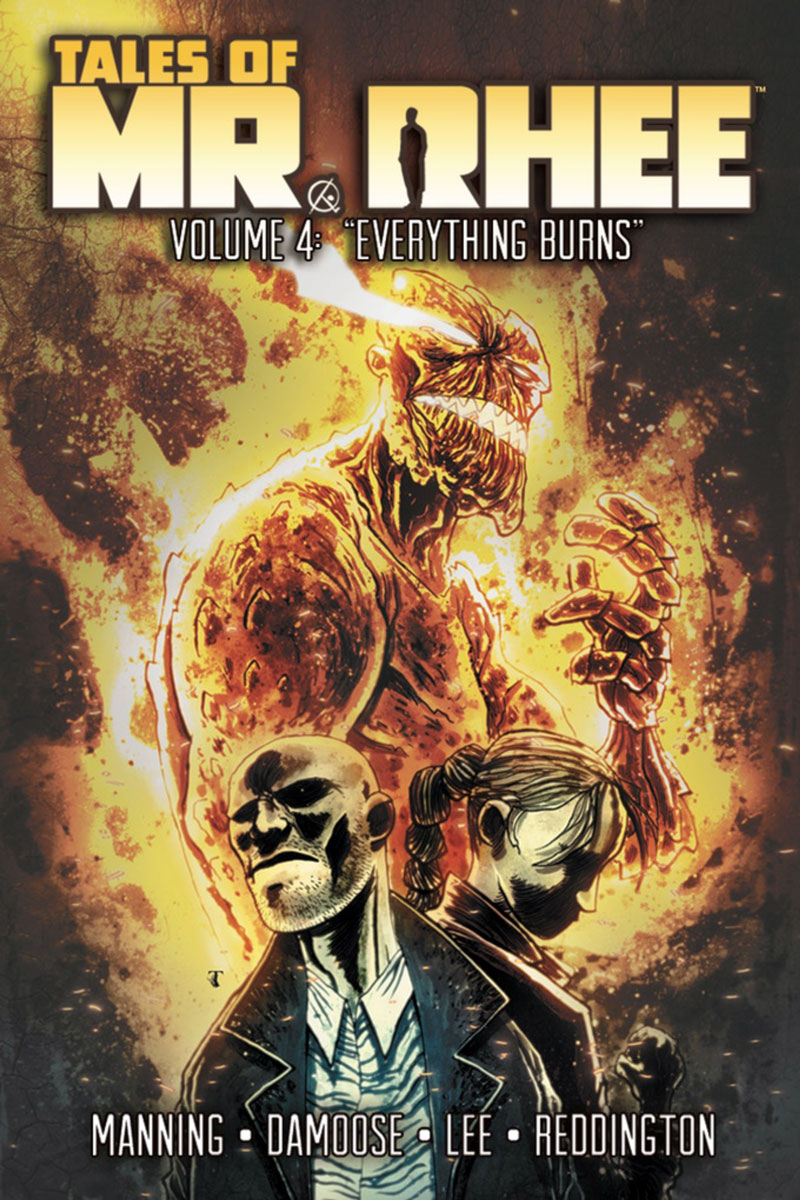 To support the TALES OF MR. RHEE Volume 4:
“Everything Burns” Kickstarter, Click HERE!