Regular readers of IDW Publishing are more than a little familiar with Tom Waltz’s name in the credits of their titles.  Not only is he an editor, handling both the Ghostbusters and G.I. Joe licensed titles, but he’s also the current writer of the Teenage Mutant Ninja Turtles series (with Kevin Eastman).

Tom took some time to discuss the art of collaboration, his career and what’s to come for the Turtles.

FOG!: Hey Tom, you have a background in both sports and the military.  How did you break into comics?

Tom Waltz: I broke into comics by accident in a lot of ways. As you mention, my background was primarily military related (first as a U.S. Marine, later as long-time employee of various defense contractors). But since I was a kid, I’ve wanted to write, so through all those other occupations, I continued to pursue my dream in my free time, writing short prose stories, selling a few here and there, and honing my craft as I continued to pay the bills with my day job. 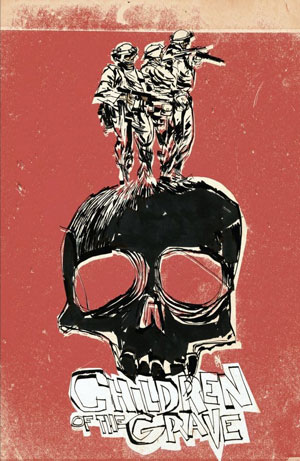 When some collaborators of mine decided to start a small comic book company (called Shooting Star Comics) they asked if I had any comic book stories I wanted to tell.

I’d never thought of writing comics, but just so happened I was working on a story in my head that I thought might work better visually than in straight prose.

That story was Children of The Grave, my first comic book work alongside artist Casey Maloney (Casey and I have since worked together on quite a few projects together).

Eventually, COTG caught the eye of IDW CEO Ted Adams, who contracted Casey and I to collect the four issues of COTG into a trade paperback.

It was during this process that I go to work closely with both Ted and IDW EiC Chris Ryall, which led to other freelance assignments for me, and eventually my fulltime position at IDW.

You’ve been collaborating with Turtles co-creator Kevin Eastman since the series launched, as well as working as a senior staff writer and editor at IDW.  What’s it like working with Kevin and editor Bobby Curnow?

Kevin and Bobby are my brothers from another mother, without a doubt! We’ve been in the TMNT trenches together now for going on six years and I’ve enjoyed ever single moment. We’re like the TMNT — Bobby can be grouchy Raph (justifiably so) when I’m pushing deadlines, but he’s also Leonardo because he keeps this ship moving forward in an organized and disciplined fashion.

Kevin, a living legend and a rock star in this industry, is our cuddly Michelangelo. That guy is one of the nicest people I’ve ever met in my life and he just exudes positivity and endless creativity.

And since I’m too dumb to be Donatello, I guess I’m Splinter… old, gray(ing), and hairy. No, I’m kidding. I’m really more of a Pigeon Pete type. Heh.

With the last arc, “The Trial of Krang” the series has not only become the longest running TMNT series, but also sets up what I’d imagine to be a pretty huge story.  Krang is a pretty beloved character, what initiated the “Trial” storyline?

The “Trial” storyline was the result of our monthly “mind meld” meetings, where Kevin, Bobby, and I get together to discuss all things relating to our ongoing series (and IDW TMNT in general).

We knew that we eventually wanted to see Krang brought to justice, but we wanted to do it in a way that left the reader in doubt throughout the entire trial. Frankly, we thought of the infamous OJ Simpson trial. For many, that was a cut-and-dry case, but the defense team was up to the task of planting seeds of doubt in jurors’ (and general public’s) minds, to point where, as we all know, OJ was acquitted. 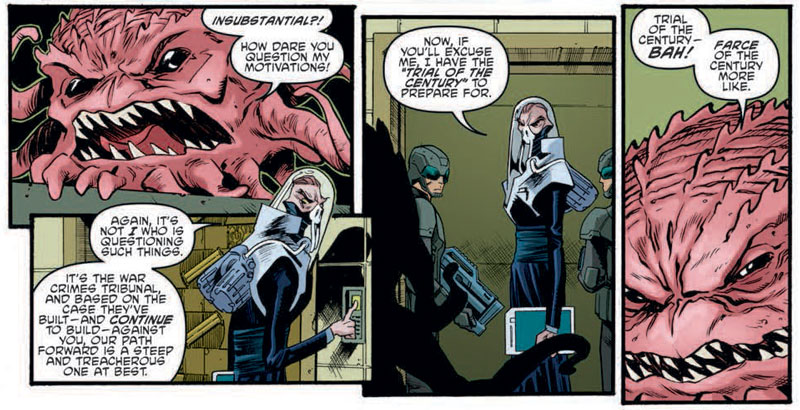 Our goal was to present a similar trial — basically, a dramatic proceeding with unexpected twists and turns, a surprise verdict, and a shocking aftermath. It was a tough one to write, but I have to say it’s an arc I’m very proud of, because I feel like we accomplished what we set out to do.

How far ahead does the team plot the book and as the actual writer, how much control do you have in tweaking the story?

We plot well in advance — often times, years. We do this for our own sanity, as well as making sure Nickelodeon has a fairly clear road map to where we’ve been, where we’re at, and where we’re going.

Kevin, Bobby, and I sweat the details in our “mind meld” meetings. Bobby takes the notes and turns them into issue summaries/breakdowns. Then I take over with the scripting phase. At that point, it’s my job to flesh out the general breakdown into a full, breathing manuscript, and I’m always given room to adjust and tweak things during this portion of the process.

There’s always a pretty solid plot for me to work from — I’m responsible for giving it personality, emotion and, I like to think, rhythm.

Who’s your favorite Turtle to write and why?

I love ‘em all, but Mikey’s always fun to write because he’s the most challenging. Yeah, he’s a goofball, but our version is a pretty deep cat, too, so I’m always looking for ways to make him both a punster and a philosopher. It’s a fascinating dichotomy and it never gets boring.

This week launches the first part of the “Invasion of the Triceratons” storyline. What can you tell us about it?

I can tell you that we will be continuing to operate in the gray area we always do. One where nothing is cut and dry… and up is sometimes down. Strange alliances will be formed and old grudges will resurface. And, as always, we hope the ending will both shock and satisfy our many loyal readers.

Like everyone else I know, I’m a huge Stranger Things fan. Love that show and its characters (it actually feels like our TMNT series in a lot of ways). Blade Runner 2049 was awesome (I’m a HUGE Blade Runner fan and had my concerns, but I worried for nothing… great movie experience).

I’m loving all the fun Ghostbusters stuff we’ve got going on at IDW — 2018’s gonna be a big year for the ‘Busters. And when people see what we have coming in our G.I. Joe: A Real American Hero series starting with issue #246 (“Dawn or the Arashikage” Part 1), watch out!

Been digging the novel A Planet of Blood and Ice by A.J. Hartley. Never get tired of playing my guitars (badly). And excited to see what the new Star Wars movie has in store.

Oh, and I really was happy to see Major League Baseball take the spotlight again this last month the way it did. What a beautiful sport! 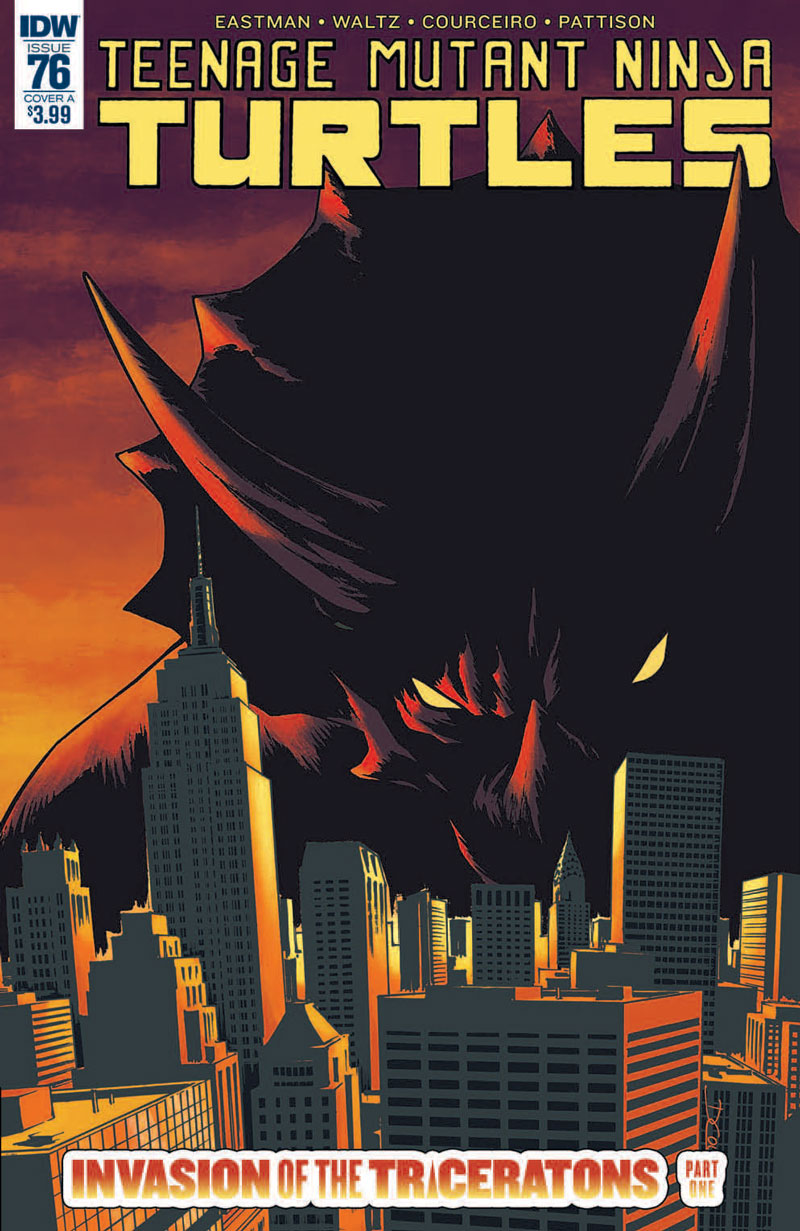