It’s Wednesday and you know what that means! DC Rebirth day! Here are some titles to get you going! 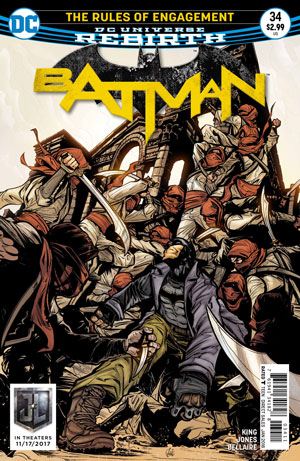 This is part two of Tom King’s story “Dream of Me.” Batman and Catwoman go off on a spiritual quest across the desert and it’s a hell of an adventure. King is hitting his stride on the book and this is a surprisingly emotional storyline.

This issue finds Batman in the desert coming across an old foe.

I don’t want to give away who it is because that is part of the fun. What I can tell you is that it has made for a rousing adventure.

King has made some choices here that are quite bold. He roots them in emotional truth so it works extremely well.

Jones is one of the best artists out there. This is a hell of a good looking book. The storytelling is top notch and done with a great amount of flair.

Pick this up. It’s quite excellent. 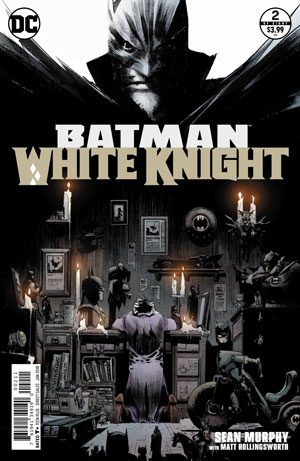 This storyline where Batman is the villain and the Joker is the hero is ballsy as hell. Good for Sean Murphy. He writes and Illustrates a book that will define him and that he will be remembered for.

Public support for Batman is starting to dwindle down. Instead, everyone is throwing support to that Joker guy! That Jack Napier is trying to expose corruption in Gotham, especially at the GCPD. He’s becoming a hero of the middle class and what will he do from here?

It’s an exciting and invigorating book. The writing is super strong and it’s the best Murphy has done. The same can be said for the art. It’s beautiful.

Pick this up. It’s destined to be a classic. 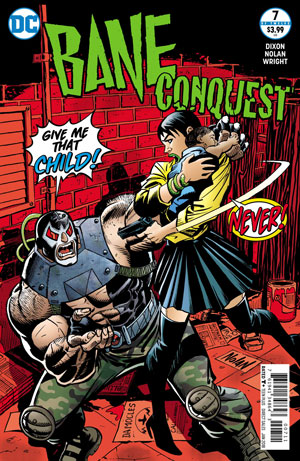 Well, this is a Batman book that is not destined to be a classic.

That being said, it’s a hell of a good time nonetheless. Bane is the star of this book and the whole thing is an action packed book with no brains. And that’s okay by me.

Bane and his gang are on a worldwide hunt for a newborn baby. Whoever gets ahold of the baby first will hold the power of the world’s largest criminal enterprise. This means that Bane may end up being a surrogate papa to the baby. (Wasn’t this storyline done a bit in Gail Simone’s Secret Six?) Oh boy.

Dixon writes a tale that doesn’t require deep thinking from the reader. The art by Nolan is very good with clean and concise storytelling.

It’s a book you can shut your brain off and enjoy.

Sound good? If so, then buy it! 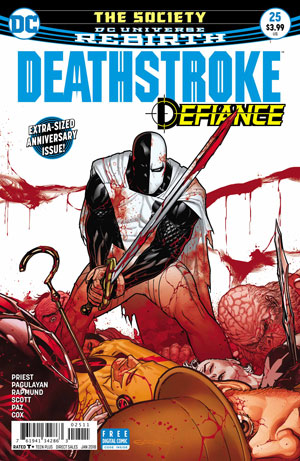 Deathstroke has taken a new direction in the series as of late. It’s nothing I’ve ever seen before regarding this character. Priest takes this new direction and he writes with joy.

Slade Wilson is a hero again!

But wait! This doesn’t sit well with the Secret Society of Super Villains! He is brought in to stand trial with them for heroism! Who would have thought it possible?

Priest puts Deathstroke through his paces and takes us to new territory in the process.

The art is super cool in this. It’s been twenty five issues of greatness in the Rebirth universe. I hope we have at the very least twenty five more.

It’s been spectacular to say the least. 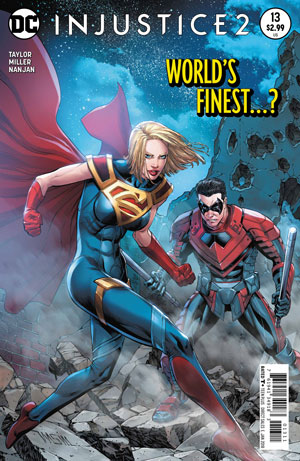 So, very recently I reread the entire Injustice series. I was stunned by how great the stories are in this alternate take on the DC Universe.

But only when Tom Taylor is writing it. The rest are childish! But luckily, Taylor writes this issue and it’s super cool for sure.

Damian Wayne decides that it’s time for Kara (Supergirl) to begin her training. The training is to get her into the ranks of Ra’s Al Ghul. This is to get her out of the kingdom.

This doesn’t sit well with Black Adam. He isn’t happy and they may face his terrible wrath!

The story is very good and the art isn’t bad (I like Bruce Retondo best on this series) do yourself a favor: Read the Tom Taylor written books of this series. They are indeed fantastic and this is very good as well. 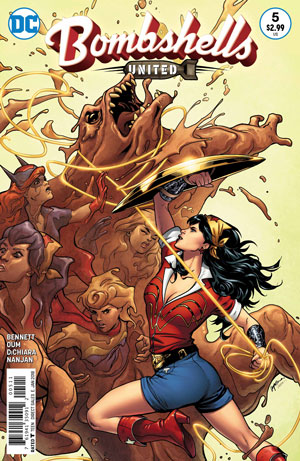 This has been a great start to this new title.

Bennett is a fantastic writer for sure and here she struts her stuff. The writing is tight and awesome and the beats of the story have been really great.

This is the finale to the “American Soil” storyline.

Donna Troy and Cassie Sandsmark make their final stand against the evil coming into their hometown.

The odds are against them…can they fight back and make a difference?

The art by Oum is pretty decent. Oum has been making the rounds over at DC and the art has been consistent. Pick this up. It’s been a good read overall. 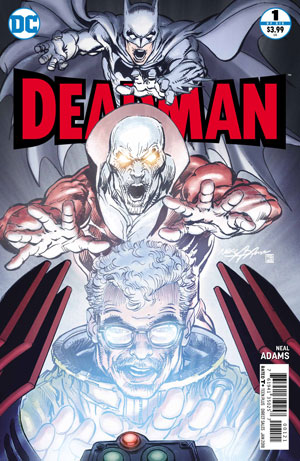 One of my favorite comic books growing up was Deadman.

I loved anything I could get my hands on from the original Arnold Drake and Carmine Infantino story to the Kelley Jones work, I loved it all.

Then, there was the Neal Adams work which I very much loved. Adams has decided to continue his story that he says he started. Sadly, I wish he just let well enough alone.

The story according to Adams has barely begun!

Why was Boston Brand killed? Was it a test to get into the League of Assassins? Can Batman help him solve the mystery surrounding his death? How is this linked to Brand’s parents? Does anyone really care anymore?

The writing on this is clunky. I wish I could say something better but it’s jumps all over the place. The art is decent enough, though it’s a far cry from being Adams’ best.

I wish it were better. It’s just not. 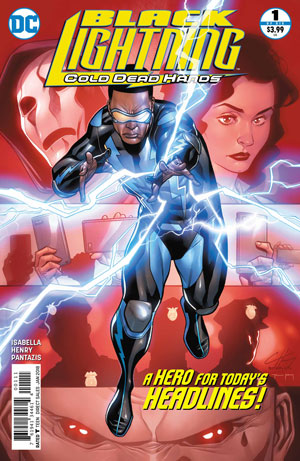 With the Black Lightning television show coming up, it only makes sense that DC would go and make another comic series. The good thing they did was bring back creator Tony Isabella to write the series. Isabella doesn’t miss a beat and it starts off great.

Jefferson Pierce is a high school teacher who is also a role model for his students. He is also the hero Black Lightning who goes around keeping the streets of Cleveland clean!

When there is a gang who comes into town with super high tech weapons, it’s time for Black Lightning to spring into action!

The action is fairly great in this. Henry is a good artist who also knows how to tell a great story.

This first issue is a blast and well done. I am looking forward to see where this series goes. 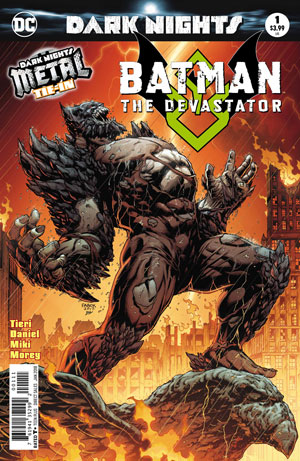 Here we are! Another Metal Tie-in about yet another maniac Batman! I love these!

And who better to write this book than Tieri.

Tieri writes some of the more nutty and crazy comics out there. He doesn’t disappoint here either.

This is the Batman fused together with Doomsday. You heard me right. It’s a comic book filled with fighting. Superman confronts this Batman from hell and it’s a wonderful thing. There is tons of destruction.

And who better to draw that destruction than Daniel? Daniel makes the action clear and concise.

It’s a cool fun issue that leads into some big Metal developments. Pick it up. You need to.