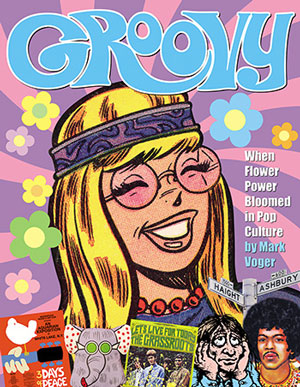 In 1968, I really, really wanted to be groovy like all the hip TV characters.

I would turn off the lights in my room and lie in bed listening to my 45 of the Monkees’ Take a Giant Step over and over while waving a flashlight rapidly up on the ceiling for an ersatz strobe effect.

I started wearing turtlenecks, a fringed vest, and bellbottoms as well as candy love beads or a peace symbol medallion.

Eventually, I bought a black light bulb and some incense.

My efforts were all for naught, however, undermined by the fact that my parents continued to insist on nine-year-old me getting buzz cut hairstyles.

One simply cannot be groovy with a buzz cut.

So I admired the psychedelic world of the ‘60s from afar until it faded into the hedonistic, disco ball-lit ‘70s and have maintained an affection for it ever since, much like author Mark Voger.

Mark recognizes that being groovy wasn’t just about being a hippie. In fact, grooviness could stem from all different corners of pop culture, even crass commercial bandwagon jumping on the part of corporate America!

Sure, Monterey and Woodstock were groovy, as were Dylan and Ringo! But so was Tiny Tim. So were cereal box singles, TV sitcoms, Jesus, and even Bob Hope movies sometimes!

So, yeah, Mark’s new book from TwoMorrows, Groovy, hit me right where I live—where I’ve lived now for the past 50 years, in fact!

With no definite starting point or cut-off point, and with so much grooviness back in the day, there’s no rigid structure to the book. Instead, it’s loosely grouped by medium and just acts as a celebration. Of course, there are tons of groovy things not mentioned at all! That was the grooviest PART of the ‘60s, the fact that so much of everything that just kept assaulting our senses was original and cool!

As a pop culture journalist of long standing, Mark has interviewed many of his own personal heroes over the years and quite a number of those interviews appear here, offering insights and humanizing the icons of that uniquely creative era. Brian Wilson, Tommy James, Susan Cowsill, Ginger Baker, Lily Tomlin, Peter Max, and Florence Henderson are literally only a few of the folks whose thoughts appear here, many of whom have left us since going on record with Mr. Voger.

Some of the sections included in the book are Top 40, Album Bands, Television, Film, Art, Festivals, Messiahs, Family Fare, and Getting Real. That last section is particularly interesting because history has tended to try and separate ‘60s pop culture from the real world when, in fact, nearly all of that pop culture existed in one way or another as a direct reaction to that real world.

Behind everything, of course, was Vietnam—the Asian elephant in the room—but there were also civil rights demonstrations, riots, pollution, assassinations, serial killers, a population explosion, the sexual revolution, black power, crooked politicians, and radical revolutionaries. It was a lot for a kid to have to endure and try and make sense of, so we were happy to have cool comic books, hip cartoons, psychedelic music, and, later, underground comix (Shh! Must be 18!).

Mark’s Groovy is told in part from his own personal experiences as just that kid and since I, too, was “that kid,” it’s relatable on multiple levels. The nostalgia factor is way over the top, with the bright colors that only our pasts can ever show us. The pure entertainment factor of the book is equally high, with behind the scenes stories and legends told that even an old pop culture maven like myself had never heard.

The flower power cover by the late Archie comics legend Stan Goldberg sets you up perfectly for everything to follow—Mad, H.R. Pufnstuf, the Beatles, the Stones, the Turtles, the Monkees, Mod Squad, Wild in the Streets, Barbarella, Wonder Woman, Zap!, Cheech and Chong, the Partridge Family, the Brady Bunch, and Jesus Christ Superstar! All of that and all the rest of the delights in this book were on my radar back then, too.

Every one of them.

I doubt that Mark Voger and I alone had all these shared experiences. I’m betting that if you’re of the right age, you did, too, or know someone who did. “Groovy” may be a rather nebulous word, as the book itself tries to explain, and flower power pop might be hard to define, but if you feel this book grabbing at you at all, in any way, grab it right back and hold onto it. You won’t be disappointed.