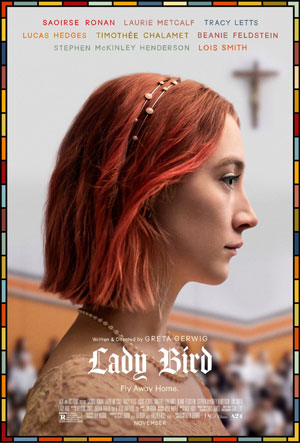 Writer/director (and sometimes actress) Greta Gerwig thanks Noah Baumbach (among others) in the credits of her new dramedy, Lady Bird, which seems entirely fitting given the similarities in their cinematic sensibilities.

Both artists work at least quasi-autobiographically to create heartfelt, closely observed character studies of brainy misfits adrift in naturalistic lives that aren’t quite cinéma vérité ’cause the soundtracks are more carefully cultivated and the dialogue’s so much wittier than everyday reality.

Yet while Baumbach’s oeuvre (from Kicking & Screaming to The Meyerowitz Stories) typically focuses on rich neurotic Jewish men in Manhattan with festering father issues, Lady Bird follows the misadventures of a restless working class Catholic girl stuck in Sacramento in a state of constant warfare with a mother by turns big-hearted and downright scary.

The roots of their intergenerational conflict are relatably familiar, yet (per the Anna Karenina principle), their dysfunctional family is also uniquely unhappy in its own specific West Coast ways.  The mother (a riveting Laurie Metcalf) is the kind of old school blue collar matriarch whose spartan version of tough love is all about ensuring that her children will be able to survive in a merciless workaday world where dreams are luxuries only kids from the trust fund side of town can afford.  And while her adopted son, Miguel (Jordan Rodrigues) seems well-suited for the responsibilities of adulthood, her underachieving daughter, Christine (Saoirse Ronan) still believes the fantasy that she’s somehow entitled to a life less ordinary.

But Christine (who’s dubbed herself “Lady Bird” in hopes she’ll soon fly away from the mundane hometown she considers the “Midwest of California”) isn’t willing to accept the joyless existence her mother seemingly thinks she deserves without a fight.  Instead, Lady Bird’s goal is to find a much fancier future as far from her family as possible by reinventing herself at a sexy East Coast school (even as her modest acknowledgement that she may not be Yale material is bluntly and emphatically confirmed by a cackling Catholic school guidance counselor).

In the interim, Lady Bird kills time in her suburban purgatory trying on different personas like discount store prom dresses, hoping to find a perfect fit for the new life she envisions (since a deadpan look from her mother makes the answer clear when the teen wonders if maybe she’s already the best person she can possibly be).

Yet while Gerwig doesn’t exactly reinvent the coming-of-age genre, she packs it with great scenes, dialogue and performances, from Beanie Feldstein’s utterly charming turn as Christine’s loyal BFF Julie to Stephen Henderson’s sweet-natured priest (who stages a high school version of Sondheim’s Merrily We Roll Along, only to sigh in disappointment when the locals don’t “get” the show).

And Saoirse Ronan is magnetic throughout, channeling the quirky charisma of her director’s onscreen work in oddball indies (like Baumbach’s own Mistress America and Greenberg) but also the sharp, unpredictable edges of actresses like Catherine O’Hara or Parker Posey to make her character less a manic pixie dream girl and more of the sort of indomitable offspring one would expect from a parent as tenacious as Metcalf’s memorable mama lion.