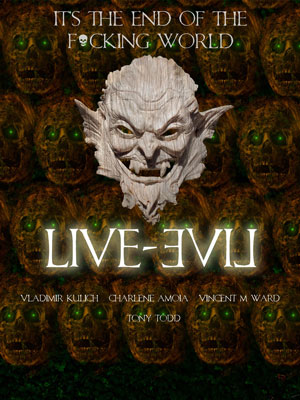 It’s Halloween night and Deputy Hancock is sent to check on a disturbance at an upscale party.

Upon arriving at the mansion Deputy Hancock encounters a group of masked partygoers fleeing the house and upon entering the home finds a number of dead attendees and a lone nude female survivor.

When Deputy Hancock brings the female into the station she realizes that the woman appears to everyone as a different person and has a dark and violent psychological effect whoever encounters her.

As the police attempt to research and figure out who it is they have in custody and what is causing the multiple strange events occurring around town but unknowingly make things worse.

By messing around with some artifacts found back at the mansion the police somehow intensify whatever supernatural force is at play and soon there are hordes of zombies staggering through their town.

Live-Evil is an interesting film with a number of great ideas but just doesn’t come together cohesively.

The movie has an interesting look with its mix of black & white and color photography along with some stand out special effects moments but I never felt invested in the characters or story and feel that more thought was put into the overall aesthetics of the film rather than developing its story.

Tony Todd has a few good scenes but overall Live-Evil is worth skipping.