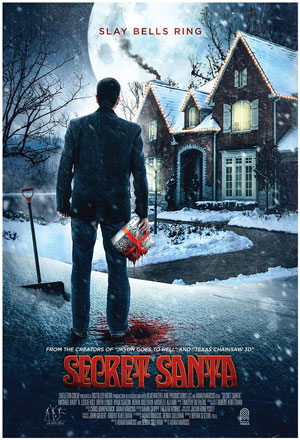 Much like its titular holiday staple, Secret Santa is a very mixed bag. An extremely violent, very gory black comedy, the film never settles on a consistent tone, which does have the advantage of keeping viewers on their toes, but it also results in some unsuccessful moments and scenes.

Performances are all over the map as well: lead A. Leslie Kies plays it straight and is thoroughly believable while others in the cast also give it their all but go way over the top.

Despite some bad moments, it all kinda works. Secret Santa details the deterioration of a (HUGELY dysfunctional) family dinner at Mom’s at Christmas time. Kies, playing April, the only child Mom actually approves of, is bringing her boyfriend to meet the family for the first time and is nervous. Very understandably nervous, once he – and we – meet these people.

During the course of the awkward evening, accusations and revelations fly at a machine-gun pace, eventually leading to madness and murder. But is festering animosity coming to the surface the only thing to blame for the sudden turn to violence?

A lot of this is fun and the film is never dull. However, some of the humor is cornball or outright bad – such as when two characters square off just before a brutal fight and another yells, “Let’s get ready to rumble!” Yikes!

There’s also a jokey reference to Carpenter’s The Thing that falls with a thud, unfortunately, and as the violence escalates, so does the gore, to the point where the “funny” violence becomes ugly and disgusting, killing the humor completely.

And yet, this is mostly lip-smacking, mean-spirited fun, with a terrific turn by Ryan Leigh Seaton as April’s bitter, miserable sister. Despite being saddled with both of the aforementioned groaners, she makes the most of her role and is unafraid to be made unattractive and colossally unlikable.

Director Adam Marcus could have made this film much more focused and tonally consistent; if he had, we might have had a holiday classic on our hands.

Yet even with its many flaws, Secret Santa serves up a good-n-nasty antidote to the traditional, treacly, “Yay, family! Yay, Christmas!” fare we usually get around the holidays.