Oh, look! The fall TV season is well under way! And I’ve been watching, folks. Not as much as usual, but I make sure I catch The Good Place (NBC) and DC’s Legends of Tomorrow (The CW).

The day will come when I write about The Good Place, everyone’s favorite high-concept afterlife comedy. But today I want to talk some more about my favorite time-traveling superhero screw-ups. 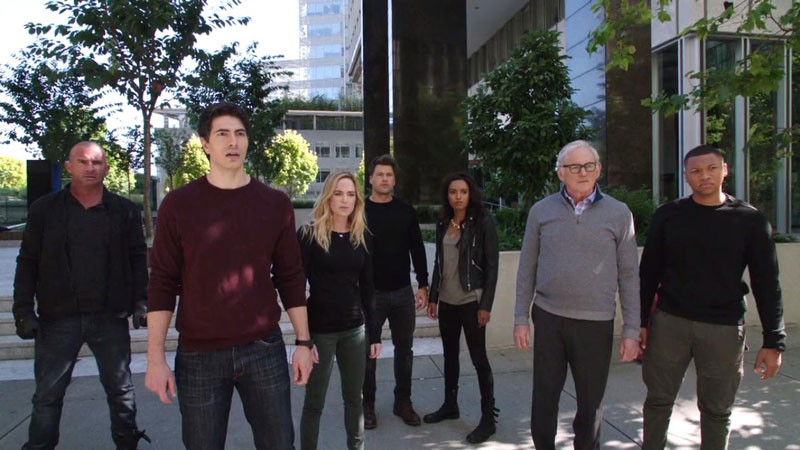 I have shared some praise of Legends before. Last season, Legends of Tomorrow shot up in fun and creativity as The Flash and Supergirl committed mistakes that soured their charms. (Arrow kept moving right along, though.) Once Mick got his turn at reciting the opening-sequence prologue, I knew this show turned a corner after a middling first season. And season three is keeping the party going, so far.

So let’s look at reasons why I am digging DC’s Legends of Tomorrow.

1. It’s a time travel show, so do whatever you want

Time travel never makes sense. It never does. You wind up in a million paradoxes before you leave the house. So instead, shows and movies just make up their rules, try to stick by them, and keep it moving before you think too hard and the whole con falls apart.

I still smile about how season two’s finale wrapped up with Sara Lance saying, “Guys, I think we broke time” as modern-day Los Angeles is overrun with dinosaurs and a displaced future buildings. Greatness. 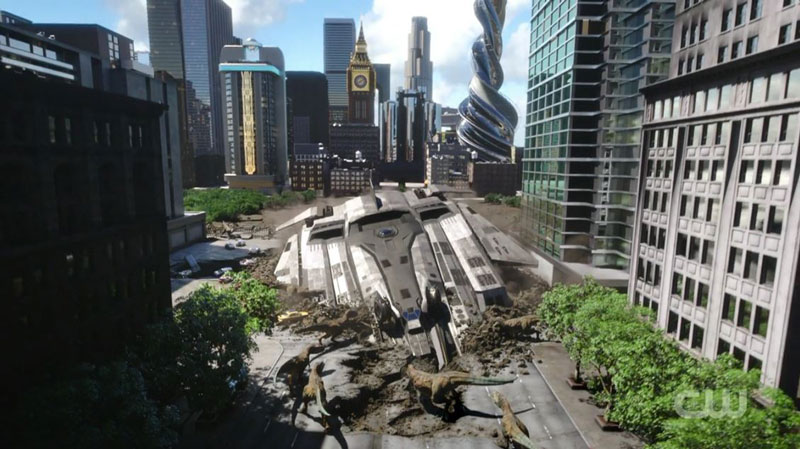 Season three picked up right where the show left off. Sara and the crew gotta fix this. Rip Hunter and the Time Masters are gone. So it’s a real hoot when, just five minutes after Rip and Sara had their big, heartwarming farewell, Rip comes through a time portal in a fancy new suit and haircut, with his Time Bureau agents men-in-blacking up the place. For Sara, it’s been five minutes. For this Rip, it’s been five years of building the Time Bureau to fix the Legends’ mistakes.

It’s a time travel show! You can do anything! So I am glad they blew up the show in this way, right off the bat. It’s as fun as watching Mick punch Julius Caesar in the face.

2.  The more the heroes mess up, the funnier it is

Furthermore, the show differentiates the types of screw-ups each member is. Each members faults blend into their strengths. Sara is often cocky and punch-first. Ray’s squareness and lack of street smarts leave him vulnerable to being duped. Mick is emotionally abused and fears meaningful connection. Jefferson doubts his intelligence and independence. Martin is overconfident in his intelligence and thinks allowances should be made for him. Nate is a blustering, shortsighted bro. Amaya’s overcompetence leads her to being controlling, rigid and impersonal.

(Also, think of how easily I call each character by their real name, not their codename. That’s how far Legends has come with these characters. Their times not heroing is more important.)

Then the Legends messed up so bad that the Legion of Doom won a few times, they all died a few times, and then saved the world a couple of times, only to break time in the process. 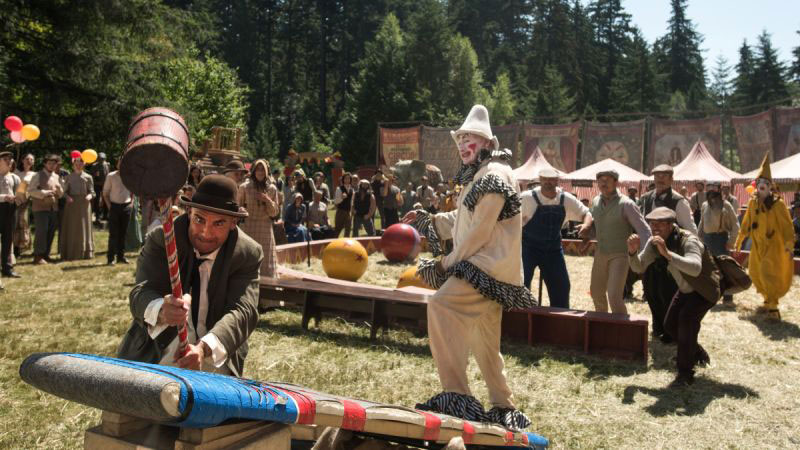 And so season three so far has been the Legends fixing anachronicities one by one while fending off Rip Hunter’s Time Bureau, as the season’s big bad villain is unrevealed but on the way.

But as long as Nate is pulling out a smartphone in 1870s America, and Mick lets out a miniature sabretoothed tiger while trying to feed it cold cuts, I will shout “WHAT ARE YOU DOING?!?” with glee. Glee!

3. Sara Lance reminds me of another headstrong captain 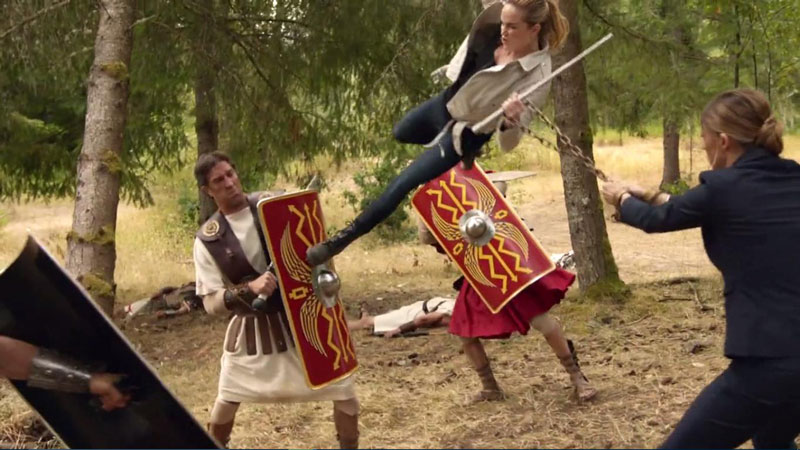 Legends is a pastiche kind of show, and it clicks best when the writers pick their favorite pieces. With a motley crew of specialists rocketing off on missions episode by episode, this time-travel show has hints of Star Trek in it.

Sara, as captain of the Waverider, is brash, headstrong, thoughtful and swashbuckling. She’s James Tiberius Kirk, if Kirk were a bisexual super-ninja. (“Bisexual super-ninja” is the name of my upcoming album.)

I mean, did you see Caity Lotz take out a bunch of centurions by leap across multiple shields and kicking the final dude in the face? She should do that every episode.

Like Kirk, the Waverider’s captain also has a way with the ladies, and the show played this out in many fashions. We had the comedy of Sara seducing a French countess while her teammates risk life and limb. But we also had a Camelot plot in which Guinevere and Sara fall in love, and Sara Lance is our Lancelot. 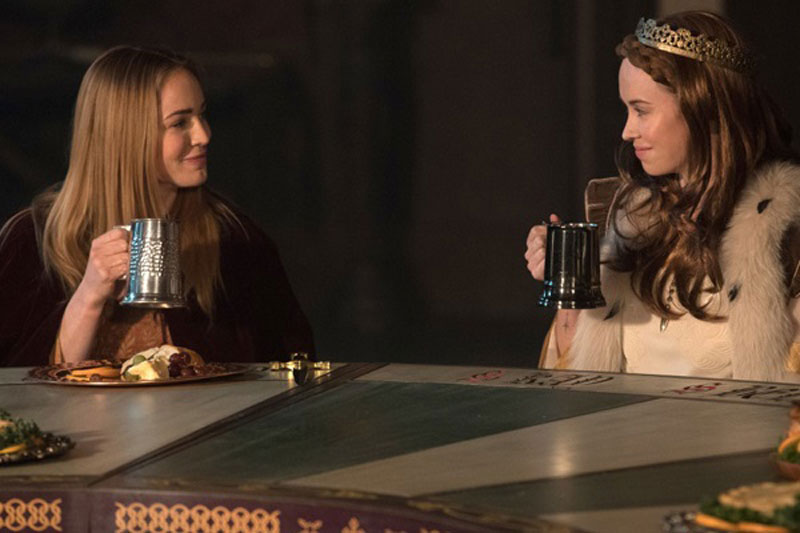 And, speaking of which, how long before she and Time Bureau Agent Sharpe get busy? They totally have set up that spirited contempt tension that boils over into something steamy. Right?

Season two took a serious leap in quality by making the villains the Legion of Doom: Malcolm Merlyn, Reverse-Flash and Damien Darkh. By doing so, Legends rewarded Arrowverse fans who saw Merlyn and Darkh draw the best out of Oliver Queen on Arrow, and Thawne draw the best out of Barry Allen on The Flash.

But that wasn’t enough! Together, the three of them could be an even funnier collection of petty, back-biting schemers always at cross purposes like an evil Three Stooges.

Now the Legends have the Time Bureau as an antagonist, and it may now dig into its own lore to reveal the season’s big bad. Bring it on.

5. They could stand to do race a bit better

I mean, we’re a long way from an early Firestorm appearance on The Flash in which Martin Stein told Jefferson Jackson to use his “natural athleticism.”

Season two’s trip to the antebellum South couldn’t get too deep, but it did pay service to how psychologically devastating it would be for Jefferson to see his ancestors enslaved. I enjoyed seeing his despair met by the slaves’ will to persist, strengthening him to fight back.

This season, we saw Vixen in 1942 slashing Belgian soldiers to pieces in her native Zambesi. I watched her show off heightened powers, and gave a hearty hell yeah. The Belgians’ track record in Africa includes horrors in Congo, and setting the table for tribal rivalries that led to the Rwandan genocide. So if Vixen makes mincemeat of those colonizers, Wakanda-style, I’m all for it. 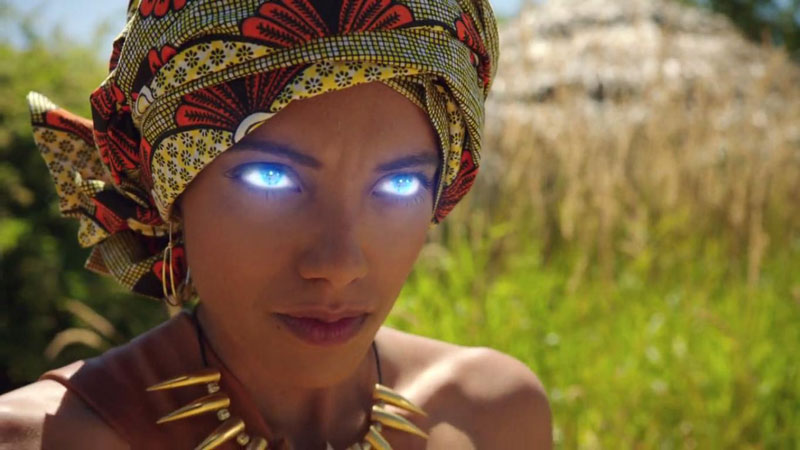 So it was disappointing, for a moment, to hear Vixen be sad about killing those young Belgian soldiers. They deserve it, and there’s no shame in knowing that. But I did like how that soon shifted to how Amaya was concerned also for her powers growing stronger and being unable to control them.

I do hope the show spends some more time looking at time travel from its black characters’ points of view, and what effect there is from coming up against anti-blackness throughout the past and from pretty much any great historical figure.

Or, how about this: We get more time in the future. Do Jefferson and Amaya get to see a vision of a future in which we’ve overcome and dismantled racism? Is there that Star Trek future of infinite diversity in infinite combinations?

This portion of the show can’t be discussed enough. One thing I miss about old-fashioned television is how, when the case was solved or the caper thwarted, the good guys would have their cute epilogue in the HQ and laugh their way into the freeze frame and credits. Legends of Tomorrow operates best as an action-adventure TV show of decades past such as The A-Team.

So go all the way. The team just got told about how the Time Bureau (or “Time Turds,” as Nate called them once) is afraid of some villain they won’t name. Jefferson simply says, “What could be worse than an immortal Egyptian demigod?” and they break out laughing.

These superheroes ride have an AI supercomputer with a matter generator capable of making anything. WHY WOULDN’T YOU HAVE IT MAKE YOUR FAVORITE BEER? 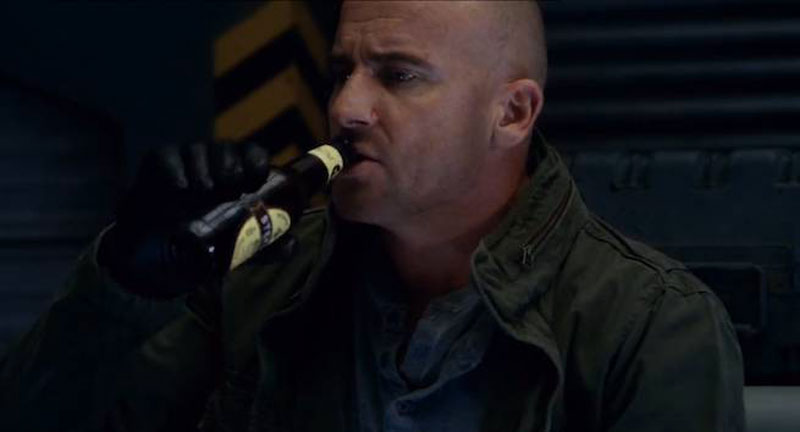 So go ahead, knock back a few cold ones after saving the world. You deserve it.

A bottle of Samuel Adams’ actual brew and a real Flintstones-style brontosaurus burger sure does beat some shawarma.