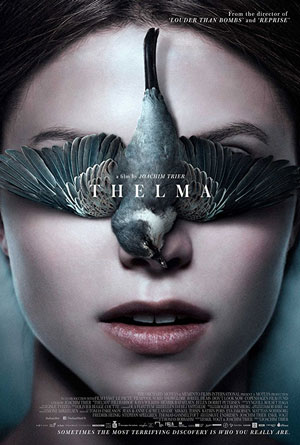 Thelma opens with a startling scene where a young girl and her father go hunting in the snow. The unexpected way that plays out sets up the conflict between the now-grown girl and the father who seeks to control her dangerous abilities.

To call Thelma “an arthouse Carrie” would be an overstatement.

And yet this eerie Norwegian drama is clearly influenced by Stephen King’s tale of a misfit girl who discovers she has supernatural powers.

It’s just as haunting in its own, far more subtle way.

Her first seizure occurs when Anja — whom she hasn’t yet met — sits next to her in the library.

First Thelma’s hand starts to shake… and a bird flies into the window as the rest of its flock seems ready to do the same. That’s when Thelma goes into a full body seizure and the flock flies away.

Anja later seeks her out to ask if she’s okay and encourages her to join her and her friends on a night out. Their budding romance plays out almost wordlessly as the two seem to be connected on a psychic level. Or is it just Thelma’s powers drawing Anja to her?

Thelma comes from a very strict religious background — she tells Anya of how her father once held her hand over a flame, saying, “This is what it feels like all the time in Hell” — so her feelings for Anja cause a kind of meltdown. Her powers spike in the conflict between her newfound joy and the repressive way she was raised. (In a way that reminds this Buffy the Vampire Slayer fan of Tara’s controlling, cultish family.)

When Thelma consults a doctor, she’s surprised to learn that when she was six years old, she had similar seizures, ones she now has no memory of. With her mother in a wheelchair, the film hints that something very dark happened when she was a child.

While there’s nothing as dramatic as the prom scene in Carrie, when we see glimpses of Thelma’s abilities, it’s stunning. Ellie Harboe (who had a small role in the Norwegian disaster film The Wave), is remarkable as the shy Thelma, who slowly learns to own her power.

Its somber mood recalls another Nordic film Let the Right One In, although it’s less explicitly a horror film. Its style is reminiscent of Terrence Malick or Park Chan-wook’s sensual, lushly cinematic Stoker, where the camera dwells lovingly on the odd plant or creature. It’s as if all of nature were in tune with the title character — and possibly at her beck and call.

Thelma is Norway’s official selection for Best Foreign Film for the 2017 Academy Awards. It opens in limited release on November 10.