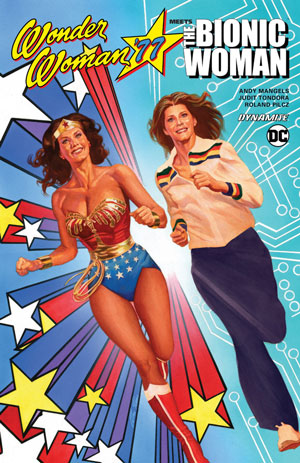 These days, comics fans are used to odd inter-franchise teamups: Archie/Predator, Scooby-Doo/Hawkman, Wonder Woman/Conan, Vampirella/Barnabas Collins, etc. Before one even reads a word or sees any artwork from it, though, the teamup of ‘70s TV’s Bionic Woman and DC’s Wonder Woman ’77 seems the most natural thing in the world.

And the most natural writer for this historic meeting was Andy Mangels, well-known for decades for his great affection for pop culture in general and for superheroines in particular!

Both comics and television fans in the ‘70s loved both shows for several seasons. Lindsay Wagner brought a quiet strength to the role of cyborg Jaime Sommers on her ABC (and later NBC) series with her slow motion super speed (so we could see it), super-strength and super-hearing. Diana Prince was portrayed on ABC (and later CBS) by the gorgeous and commanding Lynda Carter, who looked like she had been born to wear her red, white, blue, and gold super outfit!

Essential to the success of a project such as this is that the characters as drawn evoke their original performers and the artist here, one Judit Tondora, from Hungary, does an excellent job despite of what she has said was her limited exposure to the TV heroines growing up. Lots of admitted photo reference but nothing looks just traced like in the old Dell TV comics. Besides the two series’ regulars, the artist’s supporting characters even bring to mind recognizable TV character actors of the late ‘70s including, among others, Fritz Weaver, Lynda Day George, and Lloyd Bochner. Wonder Girl and Max the bionic dog even show up with substantial roles!

Similarly, the photo-influenced cover art from Cat Staggs is perfect for the mood of the series and the times and the collected volume offers up all the nifty, stylized variant covers as well, ranging from the ultra-realistic Alex Ross to Archie Comics stalwart Dan Parent.

Mangels’ story deftly ties together plot threads from both series, referencing which episodes as he goes along while never making it mandatory to have seen them before reading any further. A tricky task, indeed, but he accomplishes it with great flair and style.

The important thing, though, above the plot and the art, and some great in-jokes and references for fans of both the comics and the shows, is that the characters really ARE the characters—not JUST Jaime and Diana but Jaime and Diana specifically as portrayed by Lindsay and Lynda four decades ago. That is, I’m happy to report, where Andy really shines. He has a great ear for dialogue and I could literally hear the actresses’ voices in the panels, speaking words that they could have said back in the day. The difference is that this actually has more depth than any of their respective TV scripts had and an even more enlightened and empowering attitude toward women than American TV would have allowed at that time. There’s even a nod to same sex marriage.

The plot deals with a group of former enemies of both characters working together to discover computer secrets, the importance of which is made clear to us from our own future vantage point as readers. There are some twists and unexpected turns as well as lots of well-depicted action sequences, but the best part of the book, to my mind, deals with the interactions of the main characters as they bond in both their friendship and their mission. Thus, I was a tad disappointed when Diana is wounded and taken out of action for a long period toward the middle of the story. That particular plot development does, at least, give her the impetus for one of several cool costume changes throughout, as well as a great comeback moment.

I don’t know that I’d want another series featuring Wonder Woman and the Bionic Woman because this one answered most (non-X-rated) fanboy wishes for the characters in a most enjoyable and true to the originals manner. Kudos to Andy Mangels and Judit Tondora and all involved on behalf of myself and all the teen boys and girls who had Lindsay and Lynda on their walls in 1977 right next to Farrah!