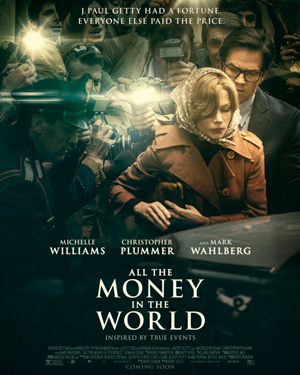 What would you give to ensure the safety of the one that you loved most?

In the case of billionaire John Paul Getty, the answer was “nothing” when his 16 year old grandson was kidnapped.

Director Ridley Scott brings depth and pathos to this tale of greed, perseverance, and no small amount of soul searching.

It is interesting to think of the kind of wealth that Getty was able to amass, and the gray areas of morality that he waded into in order to get there. As one of the richest men in the world at the time, he was both envied and vilified. It should be noted that Christopher Plummer replaced Kevin Spacey production had wrapped, though you would never know from the ease in which he slips into the hastily recast role. His deft portrayal of a man twisted and gnarled from the inside by his reverence for wealth brings to mind his recent turn as Scrooge less than a month ago, but he manages to stay on the side of despicable yet believable human behavior.

Plummer’s callousness is ever-accentuated by the persistence and grace of Michelle Williams as ex-daughter-in-law Gail. All empathy remains on her side, as she is unwavering in her commitment to return her son home. As she anxiously waits for developments from the police alongside a oddly forgettable Mark Wahlberg as Getty’s operative, ex-CIA spy Fletcher Chase, you can see the emotional toll that it is taking with each moment that her son’s safety is in question. Especially as the ticket to his freedom sits comfortably on top of his piles of money and refuses to part with a dime.

As this kidnapping went on for months, with no intention on the side of Geddy to pay for his grandson’s ransom, Gail’s grit and resolve become the defining traits for Williams to hold fast to as she explores the role. On the other side of the country, an emaciated and despondent John Paul Getty the Third is played with fragility by Charlie Plummer (unrelated to Christopher). His portrayal is somewhat marred by an unaffected teen air that cannot seem to be transcended, even as his health and spirits deteriorate. He is too pretty and still too nonchalant to drum up the same sense of angst we feel for Gail. But the real standout in that storyline is French star Romain Duris as the troubled Cinquanta, the kidnapper that stays by John’s side throughout it all. The moral dilemma that he faces as he becomes emotionally attached and protective of the teen is its on wonderful story.

Though All the Money in the World is not without its flaws, mainly in that such a technically beautiful movie has to be particularly careful of not becoming mechanical, this tale of a mother’s dedication, a grandfather’s disturbingly skewed hierarchy of concern, and a kidnapper’s change of conscience makes for a particularly engrossing version of history.