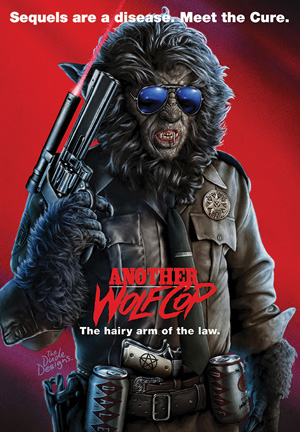 Another WolfCop is Lowell Dean’s follow up to the 2014 film Wolf Cop.  A Tony Robbins-ish bad guy (Yannick Bisson) is subverting the goodwill of a forgotten Canadian town by using the inhabitants to nefarious purpose. WolfCop (Leo Fafard) and Police Chief Tina (Amy Matysio) team up with a few others to try and save the day from the non specific bad guys.
If you grew up in the 80s and enjoy movie poster satire, you should get a kick out of it. For those who aren’t aware it’s a throwback to the 1985 Sylvester Stallone movie Cobra.
The original tagline was, “Crime is a disease, he’s the cure.”  Unfortunately for all of us, the poster is probably the best part of the film.
I can appreciate horror comedy. Shaun of the Dead and Army of Darkness are classic examples of the genre. I can even point to From Dusk Til Dawn as having some genuinely laugh out loud moments, but Another WolfCop just isn’t funny. I also have a genuine appreciation for movies so bad they are good, but this one is just so bad it’s bad.
The one thing you look at in a good, bad film is commitment from the actors. Do they believe what they are doing? Are they fully committed to the role? Do they have workable lines so even the nonsense flows. Casper Van Dien earnestly looking into the camera in Starship Troopers. “I’m from Buenos Aires and I say, KILL ‘EM ALL!” Most of this movie doesn’t have that.
Amy Matysio is professional, but most of her screen time is frantically looking back and forth and seeming fraught with indecision. Leo Fafard is mildly amusing, but let’s just agree they didn’t spend a ton of the budget on costuming, except for the prosthetic wolf penis we are graced with early in the movie. That’s something everyone needed to see.
The one acting high point in this film is Jonathan Cherry. He’s funny. He fully commits and he has a watchable quality, but why does a rural Canadian have a hick southern accent? One of the many artistic choices that make you raise an eyebrow.
The one really fun surprise is an un-credited cameo by Kevin Smith. At first, when he wanders onto the screen all I could think was, “What the heck is Kevin Smith doing associated with this?” Then, when you consider Tusk, Yoga Hosers and the eventual Moose Jaws, combined with his love of Canada and hockey jerseys, it makes some sense that he wound up involved.
Ultimately if an un-credited cameo is the real highlight of your film, you don’t have a winner on your hand.
Another WolfCop has plenty of blood and gore. It has a couple of amusing scenes including a hockey fight that you can’t un-see. Another WolfCop has lycan sex, in a strange and hairy homage to Team America: World Police without the marionettes.  What Another WolfCop doesn’t have is much of a plot or enough laughs to make it worthwhile.
Standard Rating: 1 out of 5 stars
So bad it’s good movie rating: 2 out of 5 stars

Another WolfCop is now playing.  For more details, visit WolfCop.com