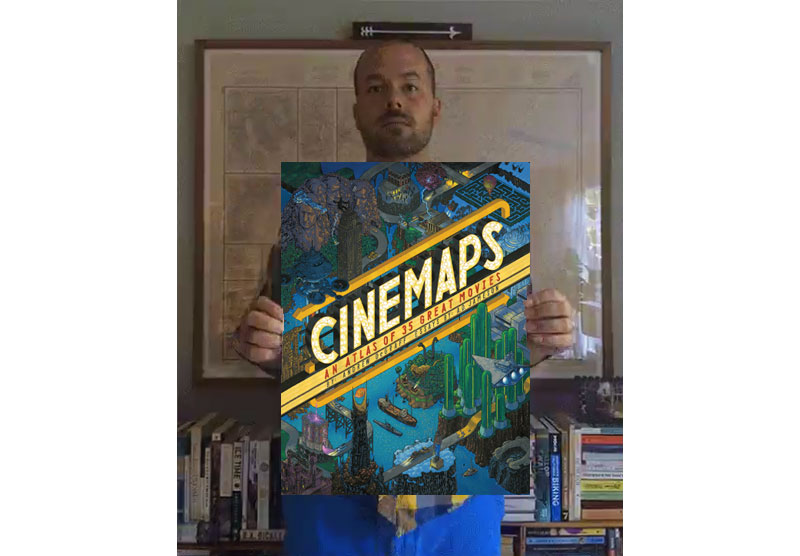 In 2015, acclaimed illustrator Andrew DeGraff wowed readers with his intricately illustrated maps of famous novels, which were published in his book Plotted: A Literary Atlas.

Now, DeGraff continues his art form in Cinemaps: An Atlas of 35 Great Movies, a collection of amazingly detailed hand-painted maps showing the plot pathways in some of the most magical movies in cinematic history. Each map is accompanied by an insightful essay written by author and film critic A. D. Jameson, allowing movie fans to appreciate their favorite films from a fresh perspective.

Each of DeGraff’s maps contains a color-coded key, so you can follow characters on their journeys through Mordor, the Overlook Hotel, the Death Star, and beyond. Iconic scenes, like the duel between Westley and Inigo Montoya in The Princess Bride (1987), are enlarged for closer inspection.

DeGraff took some time to discuss the genesis of the book, it’s challenges and his influences.

FOG!: Congratulations on Cinemaps!  It’s really a fantastic book.  Previously, you authored Plotted.  What was the genesis of creating pop culture maps?

Andrew DeGraff: Thank you! The genesis is a bit “Chicken Before the Egg”-y. The pop culture maps were actually a big part of the inspiration for Plotted. The movie maps actually started in 2010, and I began work on Plotted in 2014.

Prior to beginning the series of movie map paintings for gallery shows I was doing maps for travel features for my day job working as a professional illustrator. Making tiny landscapes full of buildings, bridges, mountains, boats, and trains – it’s kind of intoxicating. It’s like playing with toys again and after playing for magazines, I want to make something for me. Seven years and a few thousand mostly joyful hours later, that little impulse became Cinemaps.

What I find unique is that your maps not only utilize a specific location, but you also log the various characters’ journeys as well.  What challenges did you encounter when designing the book?

Part of the problem was that these were created initially only to be seen in a gallery setting, so the scale was tough. A big painting is great in person, but tricky when you have to shrink it down to fit on the page. I think Andie Reid, the book’s designer, did a fantastic job of mixing the initial full image with fun cutouts and details.

One of the challenges of creating each film is that a great film almost has one element that’s either invisible (Predator) or non-linear like time travel. So along with just trying to show where everyone goes and what they do, there’s almost always some sort of specifically tricky element whether it’s beaming in Star Trek, or Dorothy’s tornado ride to Oz: it’s going to require a little special treatment. 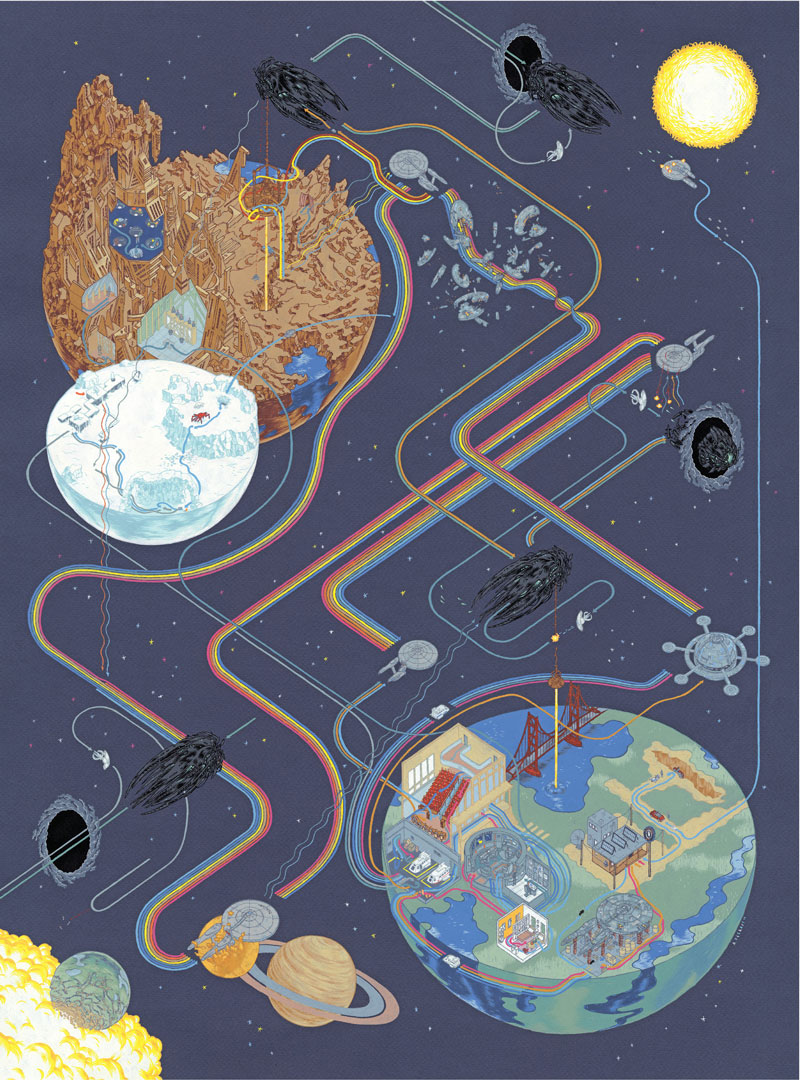 The most difficult thing by far is interiors. Cutaways of multi-level sets, often in chase scenes or important vignettes are dastardly. Especially when you have to get multiple characters in and out, sometimes twice. . . It can feel like trying to build a doghouse for an elephant. Either you shrink the elephant (which isn’t really an option), or expand the doghouse – in which case it not really a doghouse anymore, it’s a garage. So you make it JUST big enough to fit, and hope it still look the way it’s supposed to.

The book also includes essays from A.D. Jameson which discuss the geographies of each film.  How did you wind up working together?

Initially the book was attached with a different writer – the great Martin Seay (read The Mirror Thief!) who had to drop out due to a conflict with his publisher. I was heartbroken. We were at a bit of a loss as to how to replace him, and now running out of time. Martin graciously gave us a list of some colleagues who might serve the book well. One of those names was A.D. Jameson.

Jason Rekulak (Quirk Publisher extraordinaire) and I read some of his work and we were pretty blown away. He analyzes film like a double agent – he’s both observer and the observed. He’s immersed in the film, but self-aware of the immersion. There’s a passion that I thought would work well, and I was over the moon when he signed on. He’s an artistic, literary mad-scientist – which is perfect for a book that’s an art project about movies.

The book is a must have for any cinegeek, as it’s a book about not just movies, but the history of cinema.  How did you determine which films to include.

I had already created about half of the collection: Star Wars, Indiana Jones, Back to the Future – so it was really about how to round out the collection to encapsulate popular cinema, built around that Lucas-ian/Spielberg-ian core. I thought a great starting point was Metropolis, which has been perhaps one of the influential movies ever, popping up everywhere from Citizen Kane, to Queen videos, to C-3PO to Beyoncé. Same for the other earlier films – you can’t talk about Jurassic Park without mentioning King Kong.

Some of the toughest decisions were which films of the 90’s to include: which Coen Bros? Which Tarantino? Clueless or Friday? Clerks? There were a few exceptionally funny, nerdy, boisterous conference calls about the film list. There are some gems on the cutting room floor and heartbreaking omissions, but so it goes. I think we did pretty well, and there’s plenty left for a sequel!

What else do you have coming up?  Is there another map book in the works?

I’ve recently has a show with the wonderful folks at Gallery1988 in LA, which had almost all the new work I created for the book, and some color variant prints of some old favorites.

Right now I suppose I’m enjoying a break from mapping? Well sort of. I have a Force Awakens map on my table. But besides that, I’m planning on getting back into editorial illustration for a few months. I’ve missed the immediacy of the deadlines, and the “you never know what you’re going to deal with next/fly by the seat of you pants” joy of illustration. The maps are very fun, but incredibly time consuming.

That being said, after a few months – the next book or map show may be taking shape. I still have a black piece of paper that shall become a TRON map, and another grey one for Die Hard, and a blue toned one for Aliens . . .

I just did my semi-annual watching of all the Marvel Films – The Infinity Gauntlet was a big deal when I was a wee fanboy, and it’s been ever so nerdily special to watch the story develop. I know much of the world is sick of super-hero movies, but I’m a Marvel guy, and I dig it.

I just finally got around to reading Jillian and Mariko Tamaki’s This One Summer– and it exceeded my highest expectations, as Jillian Tamaki’s work generally does.

Music – lots of old soul and R&B records and compilations – what can I say? I think music used to be better . . . but maybe I’m just getting old.

Cinemaps: An Atlas of 35 Great Movies is available now from Quirk Books
and should be at the top of any cinegeek’s holiday wish list! 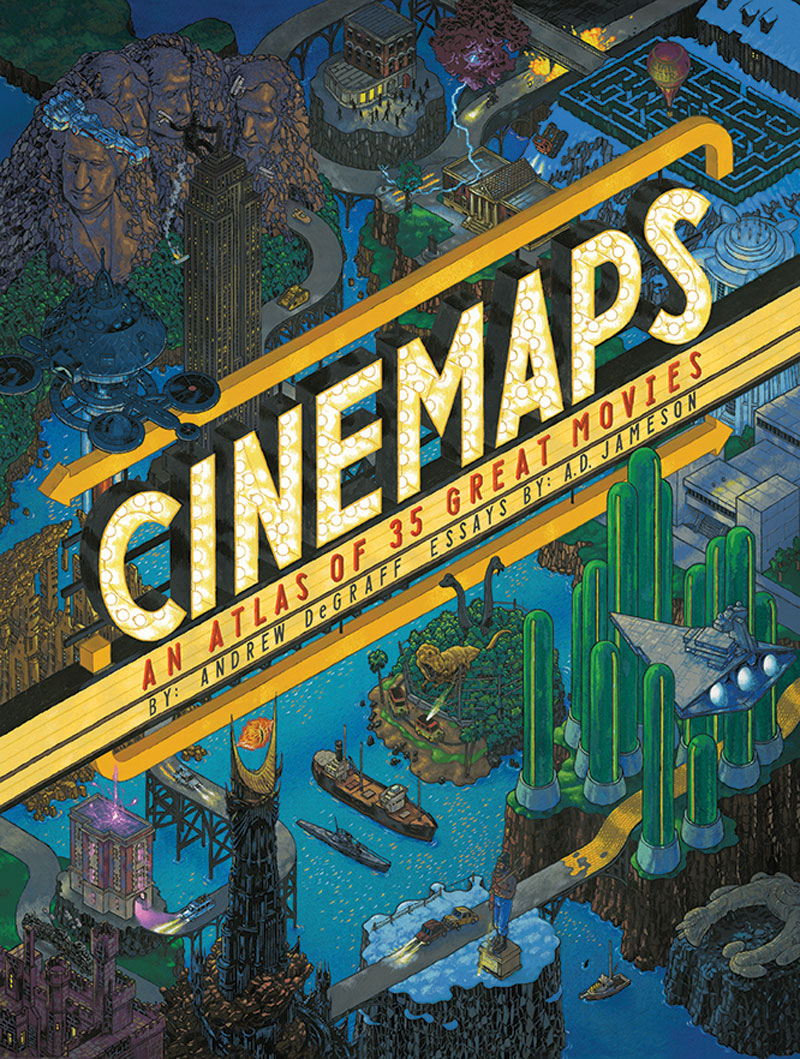