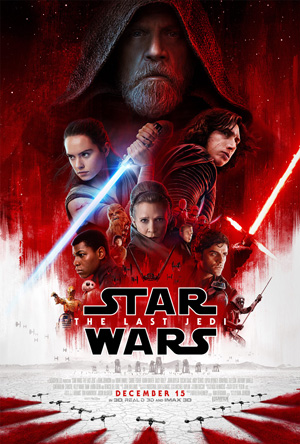 Let me begin by saying my review of Star Wars: The Last Jedi will be completely spoiler free which will be hard as we are entering territory we’ve never been before with the Star Wars franchise.

This movie should actually be titled Star Wars: All Your Fan Theories Are Wrong.

Whatever you think this film is going to be, it isn’t.

Rian Johnson picks up the reins of the Star Wars franchise from J.J. Abrams, and for the first time ever this film picks up almost immediately where the last one leaves off, moments after Rey holds out Luke’s saber to him at the end of The Force Awakens.

Johnson also steers the franchise into new and excitingly fresh territory with only a smattering of callbacks and neo-nostalgia to support this next chapter.

In the trailer Luke tells someone, “This is not going to go the way you think.” This may be the battle cry for this, the eighth episode of the Saga. Johnson takes the story in a bold direction and though his script and direction we finally get a new Star Wars film. I love The Force Awakens. I saw it 20 times in the theater. I also acknowledge that it is very much a “remakequel” ushering in an entirely new generation of fans awhile nostalgically holding on to the older original fans of the galaxy far, far away.

I went into The Last Jedi with what I thought was going to be enough of a blank slate. I was open to whatever was presented to me. I quickly realized that I held onto past ideas, recent rumors, and hopes for what the future would bring. I was pleasantly and wondrously surprised. Not only did NONE of my subconscious preconceived notions come to fruition, but what actually did happen and why, was almost better then I could have hoped for.

Some very interesting things happened at the screening for me. I laughed and I cried more then I have ever done in the entire seven previous films combined. Sure, A LOT of it has to do with the fact that our Princess, our General, is with us no more. But there is so much heart in this film that calling this film an emotional rollercoaster is to sell it short. I genuinely laughed my ass off. I actually cheered out loud and clapped, and audibly gasped more then once, and I cried so much it could have filled a space cruiser with my tears.

It actually depresses me a little that the directing and writing rings are being handed back to J.J. Abrams, who’s love of cliche, deus ex machina, and what South Park refers to as “‘member berries”. He did a great job with Episode VII, I think. However, the bar has been raised to a new level and it is a level I don’t think Abrams will be able to reach.

I can’t even really divulge the basic plot of this film other then what you may already know fit you have watched The Force Awakens as I will inevitably reveal some vague spoiler that, while won’t ruin the film for you, will definitely detract from you theater going experience. Lets just say that my original statement that You have no idea what you are about to experience, you are unprepared or this film if you have kept yourself in even a slightly strict media blackout.

Writer/director, Johnson is able to pull beautifully nuanced performances from both old and new actors to the series. Most notably were the two performances by Mark Hamill as Jedi Master, Luke Skywalker and Carrie Fisher as General Leia Organa in her final film performance.

Both actors truly live the characters and breathe new life into their roles as twin siblings. You truly feel the weight of the lifelong war they have fought, first against the Empire and now against the First Order. Both actors are unbelievably good and make you believe in the Force all over again.

The ensemble from The Force Awakens returns and bring with them new cast members Laura Dern as Vice Admiral Holdo, Benicio Del Toro as DJ, and Kelly Marie Tran as Rose Tico.

I loved The Last Jedi. It was exactly what I wanted from a new Star Wars film.

At just over two and half hours, it is the longest in the franchise so far, beating Revenge of the Sith by 11 minutes. Unlike Revenge of the Sith though it never felt long, The Last Jedi moves at a brisk pace and only lags once or twice. There were some definite things I would have trimmed out and some subplots that could have been tightened up. Almost all the jokes are hilarious and perfectly timed, though a few of the jokes didn’t work as well as others. We aren’t talking Jar-Jar stepping in poodoo bad, just not as solid as some of the others which left me in stitches. I was thankfully completely wrong about the Porgs, but I still don’t like them and I also know they were not made for me.

The Last Jedi is an entertaining, unpredicable hell-of-a-ride that left me exhausted and as emotionally spent as I was at the end of The Empire Strikes Back. Maybe even more so.

I am sure It will piss off a lot of people.

More importantly it will thrill most people to no end.

I for one can’t wait to go back and experience this film again. By the time you read this I will have seen it another two times.

In this article:Movie Review, Movies/DVD, Star Wars, The Last Jedi