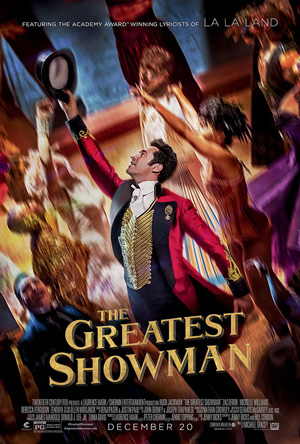 On Sunday May 21st of 2017, Ringling Brothers and Barnum & Bailey circus performed its final show.

This winter, director Michael Gracey gave us The Greatest Showman, detailing the beginnings of the birth of the circus started by PT Barnum.

While the actual circus was plagued with animal cruelty lawsuits and claims that it was antiquated, it never failed to put on an amazing show. It is too bad that this movie musical couldn’t bring that magic to the screen.

Hugh Jackman stars as Phineas Taylor Barnum, one of the founders of Barnum & Bailey Circus. As he hustles his way from street orphan to husband of high society Charity (Michelle Williams), he always has his eyes on entertaining and astounding the public. He gets his opportunity when he opens up show featuring the macabre and extraordinary. Even after partnering with Phillip Carlye (Zac Efron) to add legitimacy, Barnum stays dissatisfied with his massive success and keeps reaching for the stars. But will he manage to hold on to all the real and precious things that ground him?

This movie is a wonderful example of the reasons that decent songs and excellent actors cannot guarantee a movie musical success. Hugh Jackman and Zac Efron are two of the most talented and well-known male leads for musical films at the moment, even if Efron’s start was singing on the small screen. Yet their vibrant numbers (their duet “The Other Side” comes to mind as a well choreographed favorite), rarely occur at times where a song is the best choice for explaining a situation. A key component in the composition of a musical is that story and prose lead, and musical numbers accentuate. But the dance numbers and songs of The Greatest Showman are infinitely preferable to the shallow storytelling in between. and serve to highlight the failures of a lackluster script.

This film is about the larger-than-life beginning of one of, if not not the most well-known circus in the world. You could not ask for a better setup to provide reason for more extensive telling of the backstory or motivations of its supporting characters, but the opportunity is unfortunately wasted.

While always beautiful in both presence and voice, Zendaya’s character has no story outside of being a prop to extend the moral character development of Carlisle. In fact, only one character (Sam Humphrey as Tom Thumb), gets a brief opportunity to exist for more than a few lines outside of the circus ring. This is a loss as the glimpses we get of passion and vulnerability from the Bearded Lady Lettie Lutz (Keala Settle) inspire endless curiosity about her personal story. Yet we remain centered on a dazzling full tilt Jackman who barely leaves time for Michelle Williams’ lovely portrayal of his patient wife, or the standard class-clashing tragic romance of Efron’s rich playboy and Zendaya’s principled but lovesick aerialist. Their duet “Rewrite the Stars” is pretty but perfunctory, just like the rest of this film.

P.T. Barnum was a known shyster, and part of the entertainment was buying into the over-the-top claims. The Greatest Showman is too reserved to do his tale any justice. If anything, it is an opening act for audiences to explore a real life far more interesting than the pony show on screen.