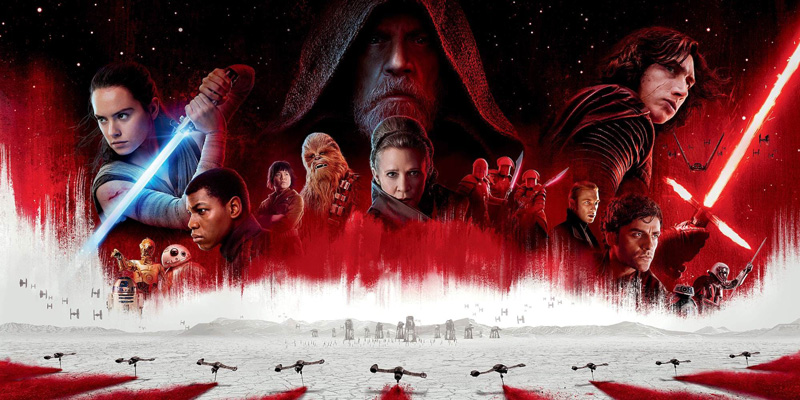 Like virtually every other movie geek, I saw Star Wars: The Last Jedi this past weekend. In fact, like many a devoted Star Wars fanatic, I saw the movie more than once.

Though my immediate reaction was enthusiastic, I concede the most common criticisms of the movie are valid—it’s way too long; the new characters aren’t particularly appealing; some of the jokes and lines of dialogue feel out of place; and there doesn’t seem to be an overarching story where, by the close of this second chapter of this new trilogy, we should feel like we’re hurtling towards an inexorable conclusion.

Being a Star Wars fanatic of the highest order, I’m easier to please than most—I can discuss elements within each of the loathed prequel films worth celebrating—so while I find many things to quibble about in The Last Jedi I’m not gonna trash talk it while my opinion of it is still formulating.

I will, however, tell you about my favorite Easter Eggs in The Last Jedi that offer well-versed Star Wars fanatics a few wink-wink, nudge-nudge acknowledgments of the previous Saga movies.

Right way, maestro John Williams offers the first of the film’s many audio Easter Eggs. As the opening text scroll crawls away into infinity and the classic “Star Wars” fanfare fades, the camera pans down the star field and we hear the exact same 10-note motif that kicks off A New Hope. Since every other Star Wars episode up ’til now has a unique musical motif bridging the fanfare to the film proper, repeating one here can only be seen (and heard) as an homage to the original movie.

As it turns out, the recycling of these opening notes is a fitting portent to what turns out to be Williams’ least inspiring Star Wars symphony, with far too many existing themes repeated and only one immediately recognizable new motif (we’ll call it “Rose’s Theme”) that I still struggle to hum even after two viewings of the movie and multiple playbacks of the orchestral soundtrack. Though they may not all count as true Last Jedi Easter Eggs, Williams works in familiar bits of “Leia’s Theme,” “Yoda’s Theme,” “The Imperial March,” “The Force Theme,” and “Rey’s Theme,” in addition to a lesser-recognizable cue from Attack of the Clones and reprises of “Scherzo for X-Wings” from The Force Awakens during two battle sequences.

I was quite shocked to see Supreme Leader Snoke get dispatched midway through the new trilogy, having learned so little about him. Turns out, all the mystery built up around him in Episode VII matters not. Snoke’s midriff slice is a direct callback to Darth Maul’s demise in The Phantom Menace, and the brief sight gag of Snoke’s severed hand still resting on the arm of his empty throne pays homage to the many dismemberments throughout the saga—most famously Luke’s lost saber hand in The Empire Strikes Back and the lopped-off limbs of his father Anakin in Revenge of the Sith and Return of the Jedi.

The bit where Vice Admiral Holdo (purple-wigged Laura Dern) rams her star cruiser into Snoke’s Star Destroyer at light speed is one of the movie’s truly awesome signature moments, both visually and sonically. The few beats of aural disorientation as the sound drops out before we hear a planet-quaking explosion is a tip of the hat to the Jango Fett/Obi-Wan asteroid field dogfight sequence in Attack of the Clones.

The climactic showdown on planet Crait happens on a white plain battlefield where the rebel base has a giant shield door fortification à la Hoth in The Empire Strikes Back. The deployment of the AT-ATs during the battle is a further nod to the greatest Episode (so far) of the Star Wars Saga.

Look sharp during Maz Kanata’s brief cameo: she flies up, up, and away in the same sort of rocket back-pack gear we once saw Boba Fett use in Return of the Jedi, previously worn by his father Jango Fett in Attack of the Clones.

Start With A Bang

The Last Jedi opens with a huge space battle just like Revenge of the Sith, the only other Star Wars episode thus far to feature a large-scale battle sequence at the head of the movie. You’d think there’d be more opening space laser battles among the films of a saga titled Star Wars, but then this one wouldn’t be such an apparent an Easter Egg.

A random mouse droid on Snoke’s star ship chirps a familiar sing-song-y salutation heard in the hangar of the Rebel base on Hoth in The Empire Strikes Back.

“That was too close”

Chewbacca, who sadly has precious little to do in The Last Jedi, gets one shining moment during the final battle where he draws off a squad of enemy TIE fighters and pilots the Millennium Falcon into the crystal caves and caverns beneath the mineral planet Crait. If this bit doesn’t remind you of Lando’s Falcon drive into the center of the superstructure of Death Star II in Return of the Jedi, turn in your Rebel papers and secret signet ring right now.

Speaking of Rebels and secret signet rings, for a Saga that has so far been pretty light on totems, The Last Jedi has more than its fair share, and they mostly harken back to the woeful prequel trilogy. In the seven previous Star Wars episodes, the only significant totem is a charm necklace Padme gives to Ani in The Phantom Menace (Padme is buried with it at the end of Revenge of the Sith). Here, there’s the aforementioned secret ring that opens to reveal the Rebel symbol to would-be allies, but there’s also a pair of yin/yang necklaces that are of great sentimental value to its owners—and of convenient use during a particular hacking mission. If the ring and necklaces weren’t enough, Episode VIII introduces an ancient library of sacred Jedi texts heretofore unmentioned.

But wait, there’s even more: The Last Jedi has a Phantom Menace-type/midichlorian-level “WTF?” moment when Luke is in the Millennium Falcon cockpit and retrieves a set of shiny gold dice from what I can only assume was late buddy Han Solo’s rearview mirror. Having never before laid eyes on these gilded charms, we can only hypothesize they were part of Han’s accessories all along and that Luke is having a moment of remembrance for his recently smoted friend.

Later, during the battle of Crait, the dice reappear when Luke symbolically returns them to Leia. I’ll cue up the Blu-rays of the original trilogy to be extra sure, but off the top of my head after umpteen viewings of the classic films I don’t recall ever seeing a golden set of swinging cubes in Han’s space cruiser. The only thing that makes sense is that these dice will turn out to be something established in next year’s stand-alone movie Solo: A Star Wars Story.

The very thought of this feels cheap—that our understanding of an element in a core “Saga” movie would necessarily depend on something depicted outside the canonical films—but how else to explain a rather crucial prop?

Luke pinches out a few squirts of discolored milk from a buxom beasty on Ahch-To and gulps it raw and unpasteurized. Gross—and earns a few queasy laughs—but this gag is definitely an homage to the blue milk Luke once drank on Tattooine by the light of the binary sunset.

But Still No Double Shadows

Speaking of binary star systems, when we see two suns on the horizon of Canto Bight (and, unless my memory deceives me, also during Luke’s final scene on Ahch-To), it’s a loud shout-out to the iconic image of Luke gazing off at the twin sunset of Tattooine in A New Hope.

Sure, there are lightsabers in The Last Jedi—no proper Star Wars movie would be complete without them—but if you feel afterwards that something isn’t quite “right” in The Last Jedi, you may be experiencing withdrawal from lightsaber duels. Sabers are ignited in The Last Jedi, and they are swung in both attack and defense, but unlike the other seven core episodes, The Last Jedi doesn’t feature a proper “duel” where the wielders of the sabers are facing off against each other. Turns out, it’s a huge distinction. As such, the one flashback moment when Jedi Master Luke Skywalker attempts to strike down the growing menace Kylo Ren is the only time in The Last Jedi when two sabers clash in conflict—so we’ll call this brief moment an Easter Egg in honor of the dozen or so legitimate saber battles throughout the rest of the core Saga.

In this article:Easter Eggs, Movies/DVD, Star Wars, The Last Jedi