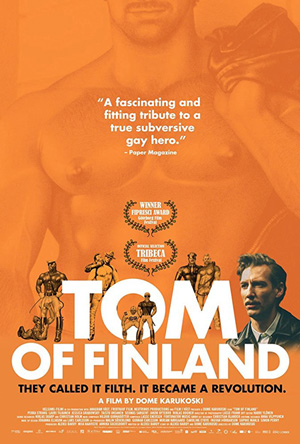 The main goal of a biopic is the ability to educate its audience, whether you agree with the topic, it’s to force you to have better understanding of that person’s way of life.

In Tom of Finland, Dome Karukoski’s biopic questions “what is art”?

For many people it could be the art held in the Vatican or Claude Monet; however to the gay community it’s the provocative works of Finnish artist Touko Laaksonen, aka Tom of Finland.

Unlike paintings of angels or flowers or even a girl with a pearl earring, he portrays hyper-muscular well endowed men of the gay lifestyle.

Despite appealing to a small crowd, he would go on to international fame within the gay community which sparks debates about depictions of hyper fetishized men in drag so popular it would inspired the artistic look of The Village People, Queen and the gay club scene.

Despite the many avenues Tom of Finland could have taken, it to this a very paint-by-numbers biopic that follows Laaksonen’s journey from his service in World War II to his rise in the art world. explores the many years of discrimination, his artwork which influenced many but shamed his hometown in Finland, where homosexuality was illegal.

Played by Pekka Strang, he used art as therapy, Laaksonen’s drawings consists of midnight encounters in parks and bathrooms, that are often filled with intensity while his depictions of police raids were time stamps in gay history and reflective of time when Laaksonen’s life was a cycle of police persecution, gay-bashing, repression, family rejection and lost love.

Unlike Tom of Finland‘s promising beginning the second half falls apart and fails to educate its audience on how Laaksonen’s artwork affected the gay community and his inner struggle with contributing to a culture of raw sex he felt contributed to the AIDS crisis in the 80’s and unrealistic beauty standards of men.

Despite superb acting from Strang, the script is flimsy at best and comparable to a simple Google search. Completely forgettable, it does a disservice to the many lives Laaksonen’s artwork touched. Full of one-dimensional characters, director Dome Karukoski plays it safe and generic.

Laaksonen is reduced to a shock artist who draws dirty pictures for his own amusement instead of someone constantly filled with loneliness due to a life lead in crippling fear of being injured or murdered because of his lifestyle and art. Lacking substance and heart, Tom of Finland is an unforntuate disappointment that fails on all levels.