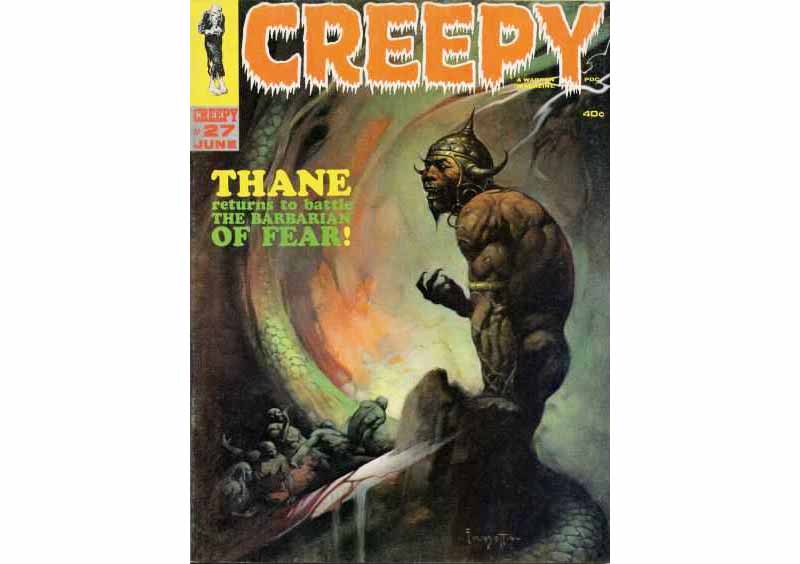 The first issue of CREEPY I ever bought from my neighborhood pharmacy featured a Frank Frazetta painting of a giant, bestial warrior, with horned helmet, gripping a bloody sword while inch-high villagers scrambled in panic around him. The cover shouted “THANE BATTLES THE BARBARIAN OF FEAR!” in green letters, so I assumed Thane was one of the tiny people being terrorized, and I had to find out how he defeated the monster.

Dropping forty cents on the counter was one of the best investments I’ve ever made, because I was finally introduced to the world of black and white horror comics, and the amazing art and story-telling skills their pages held that remain an inspiration to this day.

It was 1969, I was ten, and eating whole anything that had to do with horror, fantasy or science-fiction. The “monster explosion” of the early 60’s was dying a bit, but horror was everywhere, and it was glorious. The Universal classics played on TV for rainy Saturday nights, Hammer and AIP horrors were at the locals and drive-ins, and at the five-and-dime, there were games, coloring books, records, model kits, and trading cards.
And comics.

The world of genre fiction, has often been an illustrated world, thinking back to N.C. Wyeth’s paintings for the 1918 edition of Verne’s MYSTERIOUS ISLAND, or the plates created by J. Allen St. John for the original TARZAN hardcovers. Brilliant commercial art, the iconic images that identify these books to the world, but the idea that the words of great fantasy authors was somehow linked to the work of illustrators seemed more than trivial, and that was especially true in the judgement of comic books and newspaper comic strips.

That comic books were nothing to take seriously seems odd now, with entertainment and media practically ruled by Marvel and DC, not to mention Dark Horse. But even forty years ago, at a time when you bought comics from a spinning rack, and SUPERMAN was in syndicated re-runs, embracing comics was something you were supposed to grow out of, and back issues were for the trash.

This attitude seemed to be a hold-over from the notorious period in the 1950’s when horror comics came under the hammer of congress, effectively ending the EC line of CRYPT and VAULT titles, while some pale imitators still limped along, until they were wiped out also. Horror was alive in movie theaters, but not in comics.

Then, into this open grave stepped publisher James Warren.

I have to separate that thought, because Warren literally changed the playing field for illustrated fantasy and horror, by initiating his titles as magazines and not traditional comic books. By doing this, he made sure CREEPY, EERIE and VAMPIRELLA weren’t subject to the censoring of the comic code authority. If produced in the old format, as the EC titles were, the code would never have allowed those Frazetta warrior women, Wally Wood’s aliens, or the wild violence of Tom Sutton’s VAMPIRELLA stories.

Reading and re-reading the Warren magazines after bedtime, flashlight under the blankets, we were taken away by the economy of horror stories in six pages, with the artwork rolling the ideas, and atmosphere forward, and then surrounded us in pen and ink monsters for the twist endings. Uncle Creepy or Cousin Eerie would appear in the final panel snickering, Vampirella tended to giggle, for being so gullible.

Not every story was a gem, although writer/editor Archie Goodwin’s batting average in those early issues was amazing, but there was a quality level to the Warren magazines that, for years, didn’t dip.

In 1969, I was already a Warren fan, pouring over FAMOUS MONSTERS OF FILMLAND, and absorbing every bit of movie information that Forrest Ackerman offered up, but the black and white comics were a different style, for a different audience. They were actually more adult, or at least, for readers who had their learner’s permits.

Vampires, zombies, and even adaptations of literary classics, they were often deadly serious, with that final page, that the writer had pushed us toward at top action-speed, or led us as through a foggy cemetery, was always the killer: the artist’s image that gave nightmares for weeks.

One CREEPY story remains especially vivid, “Rock God” in CREEPY #32, written by Harlan Ellison and illustrated by Neal Adams, all inspired by a Frank Frazetta cover. 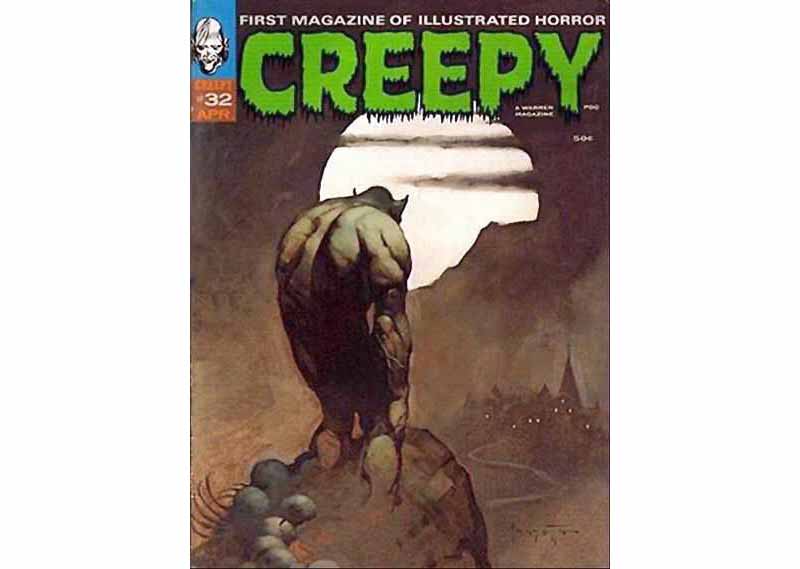 Ellison was shown the Frazetta painting, and conjured this tale of corrupt big business, mixed with the ancient black arts, with Adams’ graphics seamlessly jumping between time, human sacrifice, and the ultimate moment when the Rock God itself erupts in the middle of Manhattan.

Among more than a hundred issues of CREEPY, “Rock God” is a wonderful horror achievement, no matter what its form or publisher, and remains a high-water mark for the Warren magazine line. 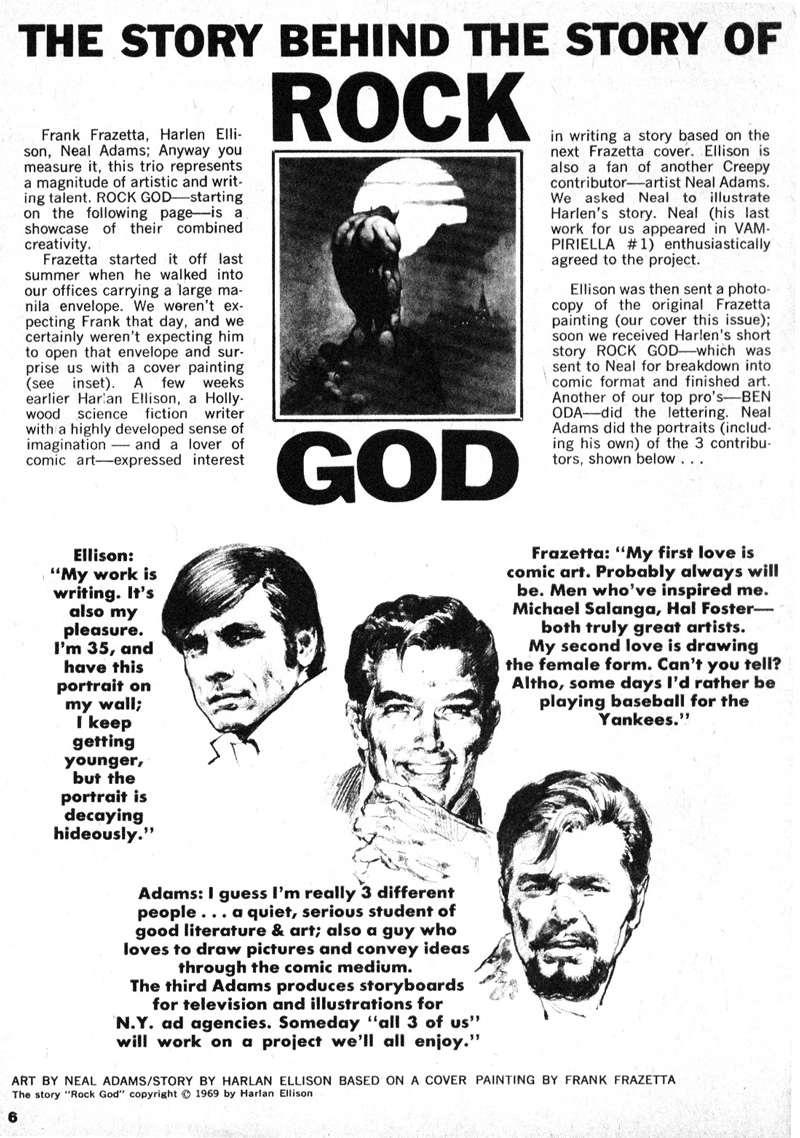 The legend around the story’s creation only gets deeper when Adams told me that all of the original artwork was stolen from the Warren offices, never to be seen again.

Mention CREEPY to anyone now, and they’ve passed a few birthdays, their first memories are the images, starting with the covers, hitting us in the eye like a movie poster. And inside, the work of artists we knew from DC and Marvel comics, but being presented in finely shaded black and white, telling these tales, with each panel they drew being a new shot from the best horror movie ever imagined.

But, in the back of each issue, an order form for the paperbacks of Conan, Tarzan, and the works of Jules Verne, and H.G. Wells. No matter how much we loved the comics we were reading, there was always that little push for us to go back to the original literature.

Changes in staff and sales figures drove James Warren to cut costs for his illustrated magazines, at a time when Marvel introduced their own group of black and white’s, the titles not staying only within horror, MONSTERS UNLEASHED, DEADLY HANDS OF KUNG-FU, TALES OF THE ZOMBIE, TOMB OF DRACULA, DOC SAVAGE, and, under writer Roy Thomas, more than 200 issues of SAVAGE SWORD OF CONAN rolled out of the Marvel factory.

When Marvel shut down this division, Warren was done, and the world of black and white magazines, finished. The Warren catalog has been re-printed, with focus on artists, so they can be seen in their glory, for nostalgia, if nothing else.

But fine illustration of horror and fantasy has always been an inspiration; to turn the page of Verne or Burroughs, and be faced with a rendition of what we just read, or to lose ourselves in the fun of a world of CREEPY and EERIE black and white horror, has noble, story-telling roots.

By pushing the bounds of the traditional comic book, those black and white Warren’s showed us what words could be turned into, and how they could evoke images, that hopefully, stay with a reader, and leave them with a shred of a nightmare, or thoughts of wonder, and a nod of creative inspiration.

Just as they’re supposed to. 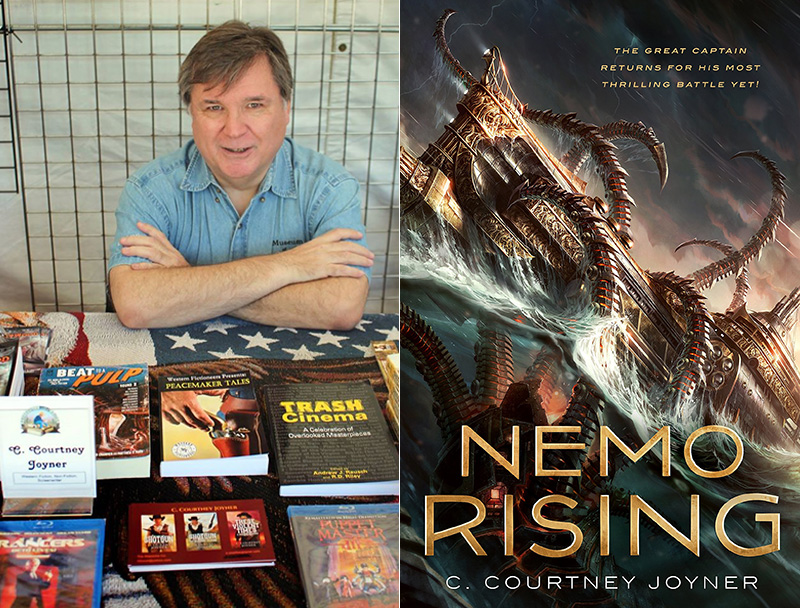 C. Courtney Joyner is an award-winning writer of fiction, comics, and screenplays. He has more than 25 movies to his credit, including the cult films Prison, starring Viggo Mortensen; From a Whisper to a Scream, starring Vincent Price; and Class of 1999, directed by Mark Lester. A graduate of USC, Joyner’s first produced screenplay was The Offspring, which also starred Vincent Price. Joyner’s other scripts have included TV movies for CBS, USA, and Showtime. He is the author of The Shotgun western series and his latest book, Nemo Rising, will be released on hardcover from Tor Books on December 26th, 2017.